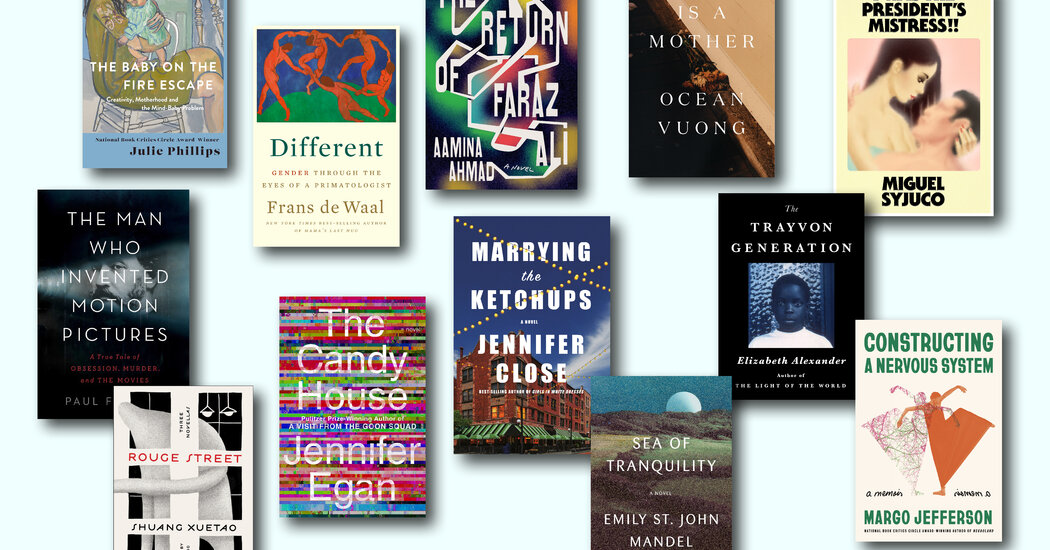 Drawing on the lives and struggles of many pioneering artists — Alice Neel, Jenny Offill, Audre Lorde, Doris Lessing and others — Phillips offers a rich inquiry into the space where inspiration, creative work and motherhood converge. “What does it mean to create, not alone in ‘a room of one’s own,’ but in a shared space?,” she asks. “What is the shape of a creative mother’s life?”

Egan returns to the world of her Pulitzer Prize-winning 2010 novel, “A Visit From the Goon Squad,” in this long-awaited follow-up. Some characters and themes recur — the music executive Bennie Salazar; his mentor, Lou; and his protégé, Sasha; among others — though Egan jumps between the perspectives of their families and loved ones in a complex story about memory, storytelling and how technology encroaches on our lives.

In her earlier autobiography, “Negroland,” Jefferson reflected on her upbringing in an upper middle-class Black family. Now, the Pulitzer Prize-winning critic and essayist widens her scope, surveying the artists who shaped her.

De Waal, whose previous books have taken on the emotional life of bonobos and chimpanzees, sets out to discern what humans can learn about gender and sex from other apes. “Whereas it is true that gender goes beyond biology, it’s not created out of thin air,” he writes. “There is every reason, therefore, to see what we can learn about ourselves from comparisons with other primates.”

In the 1880s, Louis Le Prince began testing a device that recorded animated photographs, closing in on an invention that others had chased for years. The stakes were impossibly high, Fischer writes: “No human experience, from the most benign to the most momentous, would again need to be lost to history.” But soon after, Le Prince vanished — and later, Thomas Edison would claim the credit for inventing the motion picture. Though the disappearance went unsolved, Fischer brings new life to the case.

In a fictional Philippines, the country braces for the impeachment trial of its leader (who resembles Rodrigo Duterte), and whose chief political rival is his former lover, an actress named Vita. The novel is structured as a series of interviews, from Vita’s perspective and from those of her previous romantic entanglements.

Three generations of a Chicago family are jarred by the death of their patriarch, Bud, who opened the family restaurant, JP Sullivan’s; the election of Donald Trump; and the Cubs’ World Series win. This novel surveys the fallout through three Sullivan cousins — Gretchen, a stalled musician; Jane, who suspects a marital betrayal; and their cousin Teddy, who works at the restaurant and tries to move on from heartbreak.

As a boy, Faraz was taken from Lahore’s red light district, where his mother worked, and sent by his politically-connected father to live with relatives. Years later, his father asks Faraz, now a policeman, to return to the neighborhood to cover up the killing of a young girl there. But Faraz is inevitably drawn into the case, which forces him to confront his own history.

These stories unfold in northeast China, centered on the author’s home city, Shenyang, a region that has had little literary representation available to English speakers. In an interview, the author once compared the neighborhood of his childhood to the American Wild West: “a place inhabited by the downtrodden, lawless and free, and therefore full of life.” For all the bleakness that his characters encounter there — violence, poverty, retribution — there are moments of possibility and levity, too.

Mandel’s novel “Station Eleven,” which imagined the artistic and societal consequences of a deadly pandemic, took on an unsettling relevance over the past two years. Now, in a time-traveling story that leaps across centuries, she follows characters from British Columbia in the early 1900s to an interstellar colony in the 25th century.

‘Time Is a Mother,’ by Ocean Vuong (Penguin Press, April 5)

In his second poetry collection, written in the wake of his mother’s death, Vuong grapples with themes that recall his novel “On Earth We’re Briefly Gorgeous”: grief, belonging, and the political and cultural legacies of the Vietnam War.

“I call the young people who grew up in the past 25 years the Trayvon Generation,” writes Alexander, a poet and scholar. The book, which weaves in art and writing from Clint Smith, Glenn Ligon, Elizabeth Catlett and others, expands on an essay she published in The New Yorker in 2020 after the killing of George Floyd. For many members of this generation, Alexander says, the stories of Floyd, Breonna Taylor, Alton Sterling and others “were the ground soil of their rage.”