27 Migrants Drown Trying to Go From France to U.K. by Boat 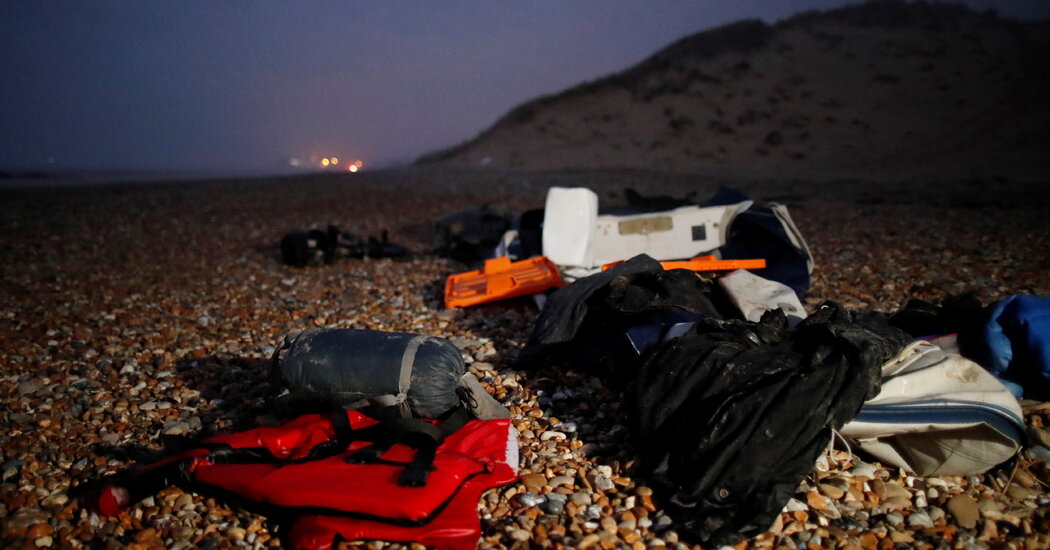 PARIS — At least 27 people drowned in frigid waters off the coast of France on Wednesday, after a boat carrying migrants trying to reach Britain capsized in the English Channel, one of the worst death tolls in recent years for migrants attempting the dangerous crossing.

Gérald Darmanin, France’s interior minister, said that the dead, including five women and a little girl, were part of a group whose “extremely fragile” inflatable boat was found completely deflated by rescuers. French officials had previously given a death toll of 31, but later revised the figure.

Two people were rescued but were hospitalized with severe hypothermia. It was still unclear where the migrants were from, Mr. Darmanin told reporters from Calais.

“It’s an absolute tragedy that fills us with anger,” he said.

The drownings came only a few days after French and British authorities reached an agreement to do more to stem the number of people taking to the sea. They were also a stark reminder that five years after authorities dismantled a sprawling migrant camp in Calais, both countries are still struggling to handle the flow of migrants in the area.

“France won’t let the Channel become a graveyard,’’ President Emmanuel Macron said in a statement. He called on an immediate tightening of border controls and an increased crackdown with other European nations on immigrant smugglers. Mr. Darmanin noted, for instance, that smugglers sometimes bought boats in Germany and brought them to France for use in trafficking.

Local maritime authorities said they quickly sent out rescue ships and helicopters after a fishing vessel alerted them that several people were lost off the coast of Calais.

Attempts to reach Britain by boat have increased in recent years as the authorities crack down on the smuggling of asylum-seekers inside trucks crossing the Channel Tunnel.

Since the beginning of the year, there have been 47,000 attempts to cross the Channel and 7,800 migrants had been saved from shipwrecks, according to French officials. Seven people had died or disappeared so far this year before the incident on Wednesday.

Last week, Decathlon, a large sporting goods chain, announced that it had stopped selling kayaks in its stores in Calais and in Grande-Synthe, another city on the northern coast, because they could endanger the lives of migrants trying to use them to cross the channel.

Many migrants — who are often from countries in Africa or the Middle East like Iraq and Eritrea — perceive Britain as an ideal destination because English is spoken, because they already have family or fellow country-members there, and because the job market is more loosely regulated for undocumented migrants.

But the recent increase in attempts to cross the English Channel by boat reflects a shift in routes rather than a surge in migration, according to migration experts and rights groups, who say that, overall, asylum applications in Britain are down this year.

The crossings have become another element in the worsening relations between France and Britain, with each side accusing the other of not doing enough to curb the attempts. Under an agreement between the two nations, Britain pays France to clamp down on crossings through surveillance and patrols.

Mr. Darmanin, the interior minister, said that on Wednesday alone there were 780 police officers and gendarmes watching the coastline. Over 250 people made the crossing, he said, and 671 were arrested.

“It was therefore a day like any other, unfortunately,” he added. He said those most responsible for the tragedy were smugglers who ask migrants for thousands of euros in exchange for unsafe passage on flimsy vessels.

Four smugglers with suspected ties to the boat that sank on Wednesday have been arrested, Mr. Darmanin said.

Migrant rights groups have been especially critical of British officials who, they say, have adopted an increasingly harsh stance against asylum seekers, even threatening to push boats back toward France.

“This situation is the result of Britain’s shameful policy,’’ said Pierre Henry, the former director of France Terre D’Asile, a migrants rights group. “France cannot continue being a subcontractor to that kind of migration policy. It’s absurd and ineffective. It just ends up making more expensive the most dangerous form of crossing. What happened today was bound to happen.’’

France has also been criticized by nonprofit groups who say the police harass migrants in the area around Calais to make them leave. A Human Rights Watch report from October described the tactic as “enforced misery” — restricting food and water distributions, cutting tents and confiscating sleeping bags, and repeatedly evicting them from camps.

Olivier Caremelle, a local official and former chief of staff to the mayor of Grande-Synthe, which has long sheltered migrants and refugees, said that Wednesday’s deaths were “to be expected” given the significant risks presented by the cold seas of the English Channel, heavy shipping traffic and changing weather.

Prime Minister Boris Johnson of Britain said that he was “shocked and appalled and deeply saddened by the loss of life at sea in the Channel.” But, he added: “I also want to say that this disaster underscores how dangerous it is to cross the Channel in this way.”

The French authorities have regularly cleared migrant camps near Calais, offering migrants the opportunity to move to a shelter and file asylum requests. But many migrants prefer to continue their journeys to Britain. One such camp that was home to around 1,000 people in Grande-Synthe was cleared last week.

Migrants will keep trying to cross the Channel, Mr. Caremelle said, and are determined to “get on boats and try their luck in England.” Only a policy that would try to find them opportunities in France “would convince some of them not to take such risks,” he said.