A Cure for Type 1 Diabetes? For One Man, It Seems to Have Worked. 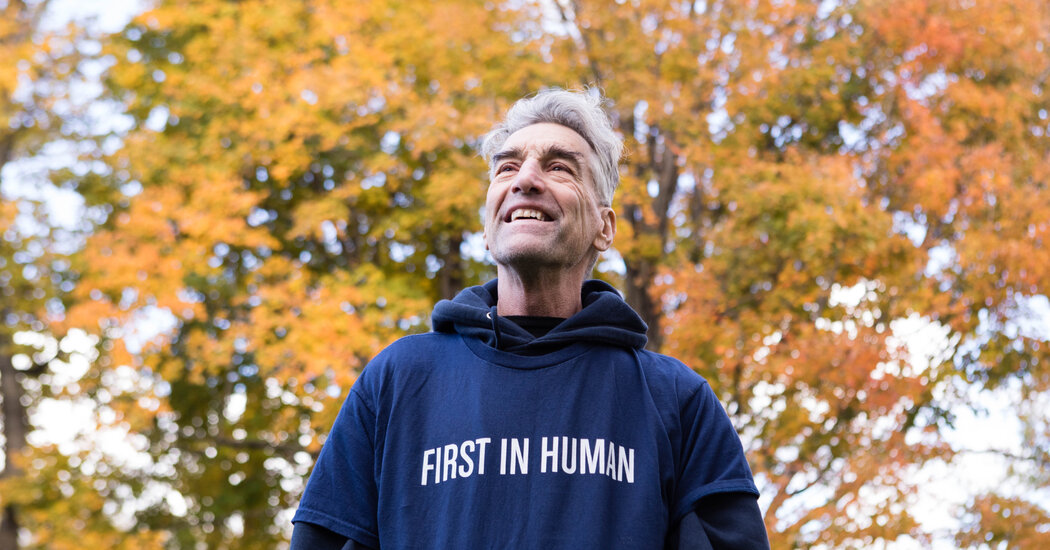 When his blood sugar plummeted, he would lose consciousness without warning. He crashed his motorcycle into a wall. He passed out in a customer’s yard while delivering mail. Following that episode, his supervisor told him to retire, after a quarter century in the Postal Service. He was 57.

His ex-wife, Cindy Shelton, took him into her home in Elyria, Ohio. “I was afraid to leave him alone all day,” she said.

Early this year, she spotted a call for people with Type 1 diabetes to participate in a clinical trial by Vertex Pharmaceuticals. The company was testing a treatment developed over decades by a scientist who vowed to find a cure after his baby son and then his teenage daughter got the devastating disease.

Mr. Shelton was the first patient. On June 29, he got an infusion of cells, grown from stem cells but just like the insulin-producing pancreas cells his body lacked.

Mr. Shelton, now 64, may be the first person cured of the disease with a new treatment that has experts daring to hope that help may be coming for many of the 1.5 million Americans suffering from Type 1 diabetes.

Diabetes experts were astonished but urged caution. The study is continuing and will take five years, involving 17 people with severe cases of Type 1 diabetes. It is not intended as a treatment for the more common Type 2 diabetes.

“We’ve been looking for something like this to happen literally for decades,” said Dr. Irl Hirsch, a diabetes expert at the University of Washington who was not involved in the research. He wants to see the result, not yet published in a peer-reviewed journal, replicated in many more people. He also wants to know if there will be unanticipated adverse effects and if the cells will last for a lifetime or if the treatment would have to be repeated.

But, he said, “bottom line, it is an amazing result.”

Dr. Peter Butler, a diabetes expert at U.C.L.A. who also was not involved with the research, agreed while offering the same caveats.

“It is a remarkable result,” Dr. Butler said. “To be able to reverse diabetes by giving them back the cells they are missing is comparable to the miracle when insulin was first available 100 years ago.”

And it all started with the 30-year quest of a Harvard University biologist, Doug Melton.

Dr. Melton had never thought much about diabetes until 1991 when his 6-month-old baby boy, Sam, began shaking, vomiting and panting.

“He was so sick, and the pediatrician didn’t know what it was,” Dr. Melton said. He and his wife Gail O’Keefe rushed their baby to Boston Children’s Hospital. Sam’s urine was brimming with sugar — a sign of diabetes.

The disease, which occurs when the body’s immune system destroys the insulin-secreting islet cells of the pancreas, often starts around age 13 or 14. Unlike the more common and milder Type 2 diabetes, Type 1 is quickly lethal unless patients get injections of insulin. No one spontaneously gets better.

Patients are at risk of going blind — diabetes is the leading cause of blindness in this country. It is also the leading cause of kidney failure. People with Type 1 diabetes are at risk of having their legs amputated and of death in the night because their blood sugar plummets during sleep. Diabetes greatly increases their likelihood of having a heart attack or stroke. It weakens the immune system — one of Dr. Butler’s fully vaccinated diabetes patients recently died from Covid-19.

Added to the burden of the disease is the high cost of insulin, whose price has risen each year.

The only cure that has ever worked is a pancreas transplant or a transplant of the insulin-producing cell clusters of the pancreas, known as islet cells, from an organ donor’s pancreas. But a shortage of organs makes such an approach an impossibility for the vast majority with the disease.

“Even if we were in utopia, we would never have enough pancreases,” said Dr. Ali Naji, a transplant surgeon at the University of Pennsylvania who pioneered islet cell transplants and is now a principal investigator for the trial that treated Mr. Shelton.

For Dr. Melton and Ms. O’Keefe, caring for an infant with the disease was terrifying. Ms. O’Keefe had to prick Sam’s fingers and feet to check his blood sugar four times a day. Then she had to inject him with insulin. For a baby that young, insulin was not even sold in the proper dose. His parents had to dilute it.

“Gail said to me, ‘If I’m doing this you have to figure out this damn disease,’” Dr. Melton recalled. In time, their daughter Emma, four years older than Sam, would develop the disease too, when she was 14.

Dr. Melton had been studying frog development but abandoned that work, determined to find a cure for diabetes. He turned to embryonic stem cells, which have the potential to become any cell in the body. His goal was to turn them into islet cells to treat patients.

One problem was the source of the cells — they came from unused fertilized eggs from a fertility clinic. But in August 2001, President George W. Bush barred using federal money for research with human embryos. Dr. Melton had to sever his stem cell lab from everything else at Harvard. He got private funding from the Howard Hughes Medical Institute, Harvard and philanthropists to set up a completely separate lab with an accountant who kept all its expenses separate, down to the light bulbs.

Over the 20 years it took the lab of 15 or so people to successfully convert stem cells into islet cells, Dr. Melton estimates the project cost about $50 million.

The challenge was to figure out what sequence of chemical messages would turn stem cells into insulin-secreting islet cells. The work involved unraveling normal pancreatic development, figuring out how islets are made in the pancreas and conducting endless experiments to steer embryonic stem cells to becoming islets. It was slow going.

After years when nothing worked, a small team of researchers, including Felicia Pagliuca, a postdoctoral researcher, was in the lab one night in 2014, doing one more experiment.

“We weren’t very optimistic,” she said. They had put a dye into the liquid where the stem cells were growing. The liquid would turn blue if the cells made insulin.

Her husband had already called asking when was she coming home. Then she saw a faint blue tinge that got darker and darker. She and the others were ecstatic. For the first time, they had made functioning pancreatic islet cells from embryonic stem cells.

The lab celebrated with a little party and a cake. Then they had bright blue wool caps made for themselves with five circles colored red, yellow, green, blue and purple to represent the stages the stem cells had to pass through to become functioning islet cells. They’d always hoped for purple but had until then kept getting stuck at green.

The next step for Dr. Melton, knowing he’d need more resources to make a drug that could get to market, was starting a company.

His company Semma was founded in 2014, a mix of Sam and Emma’s names.

One challenge was to figure out how to grow islet cells in large quantities with a method others could repeat. That took five years.

The company, led by Bastiano Sanna, a cell and gene therapy expert, tested its cells in mice and rats, showing they functioned well and cured diabetes in rodents.

At that point, the next step — a clinical trial in patients — needed a large, well financed and experienced company with hundreds of employees. Everything had to be done to the exacting standards of the Food and Drug Administration — thousands of pages of documents prepared, and clinical trials planned.

Chance intervened. In April 2019, at a meeting at Massachusetts General Hospital, Dr. Melton ran into a former colleague, Dr. David Altshuler, who had been a professor of genetics and medicine at Harvard and the deputy director of the Broad Institute. Over lunch, Dr. Altshuler, who had become the chief scientific officer at Vertex Pharmaceuticals, asked Dr. Melton what was new.

Dr. Melton took out a small glass vial with a bright purple pellet at the bottom.

“These are islet cells that we made at Semma,” he told Dr. Altshuler.

Vertex focuses on human diseases whose biology is understood. “I think there might be an opportunity,” Dr. Altshuler told him.

The company will not announce a price for its diabetes treatment until it is approved. But it is likely to be expensive. Like other companies, Vertex has enraged patients with high prices for drugs that are difficult and expensive to make.

Vertex’s challenge was to make sure the production process worked every time and that the cells would be safe if injected into patients. Employees working under scrupulously sterile conditions monitored vessels of solutions containing nutrients and biochemical signals where stem cells were turning into islet cells.

Less than two years after Semma was acquired, the F.D.A. allowed Vertex to begin a clinical trial with Mr. Shelton as its initial patient.

Like patients who get pancreas transplants, Mr. Shelton has to take drugs that suppress his immune system. He says they cause him no side effects, and he finds them far less onerous or risky than constantly monitoring his blood sugar and taking insulin. He will have to continue taking them to prevent his body from rejecting the infused cells.

But Dr. John Buse, a diabetes expert at the University of North Carolina who has no connection to Vertex, said the immunosuppression gives him pause. “We need to carefully evaluate the trade-off between the burdens of diabetes and the potential complications from immunosuppressive medications.”

Mr. Shelton’s treatment, known as an early phase safety trial, called for careful follow-up and required starting with half the dose that would be used later in the trial, noted Dr. James Markmann, Mr. Shelton’s surgeon at Mass General who is working with Vertex on the trial. No one expected the cells to function so well, he said.

“The result is so striking,” Dr. Markmann said, “It’s a real leap forward for the field.”

Last month, Vertex was ready to reveal the results to Dr. Melton. He did not expect much.

“I was prepared to give them a pep talk,” he said.

Dr. Melton, normally a calm man, was jittery during what felt like a moment of truth. He had spent decades and all of his passion on this project. By the end of the Vertex team’s presentation, a huge smile broke out on his face; the data were for real.

He left Vertex and went home for dinner with Sam, Emma and Ms. O’Keefe. When they sat down to eat, Dr. Melton told them the results.

“Let’s just say there were a lot of tears and hugs.”

For Mr. Shelton the moment of truth came a few days after the procedure, when he left the hospital. He measured his blood sugar. It was perfect. He and Ms. Shelton had a meal. His blood sugar remained in the normal range.

Mr. Shelton wept when he saw the measurement.