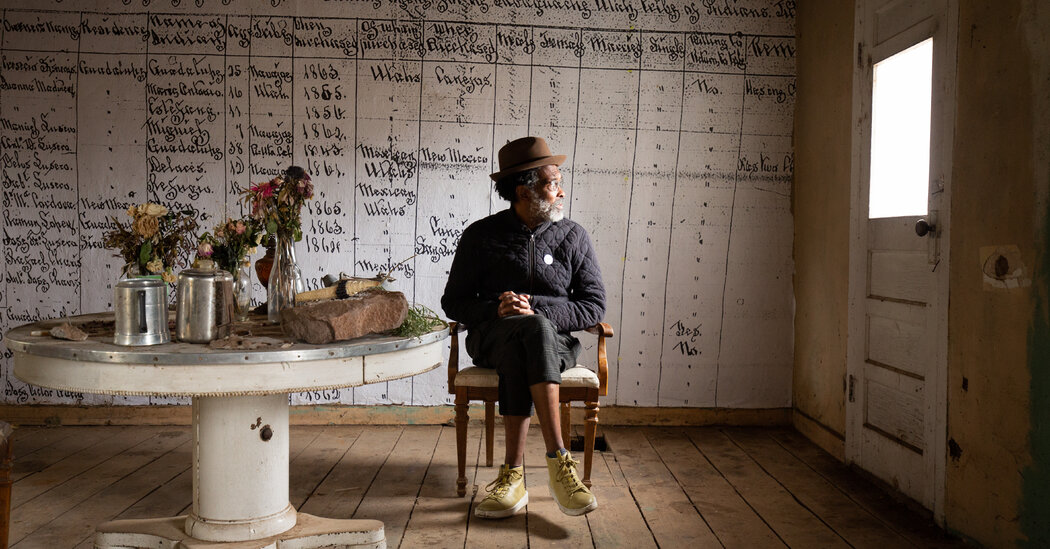 FORT GARLAND, Colo. — On a bitter, windy day, a long-overdue reckoning took place in the commandant’s quarters at Fort Garland Museum & Cultural Center, , a former military outpos. For most of its history, the museum has celebrated the frontiersman Christopher (Kit) Carson, who briefly commanded this far-flung garrison built during American westward expansion to protect settlers from raids by tribes.

But now the museum was telling a far different story in an exhibition titled “Unsilenced: Indigenous Enslavement in Southern Colorado” — one of the first dedicated to highlighting details of the little-known and centuries-old system of Indigenous bondage that the historian Andrés Reséndez called “the other slavery” in his landmark 2016 book.

On this October afternoon, the quarters were redolent with smoke from a healing ceremony performed by a Navajo spiritual leader for the descendants from many tribes who had gathered this day to honor the grim history of kidnapping, enslavement and forced assimilation of their ancestors. Though glorified for decades, Kit Carson led a devastating 1864 U.S. military campaign to defeat Navajo resistance and remove Indigenous people from their homelands.

“We knew that historically our lives were distorted due to colonization,” said Shawn Price, the Navajo teacher or “wisdom keeper,” who learned of the exhibition on social media and offered to perform a traditional healing ceremony at its opening, with Dineh’ Tah Navajo dancers. “What they’re telling us is a long hidden and suppressed truth.”

Some scholars now argue that the brutal trafficking in Indigenous people began with Christopher Columbus’s first voyage in 1492 and flourished in the Southwest borderlands. Many women and children were taken and traded, sometimes in retaliatory tribal raids or in attacks by Spanish colonists; and much later, they were obtained and exchanged by American settlers. While Indigenous enslavement was never legal, slaveholders stubbornly resisted federal and state efforts to stop it.

Until relatively recently, it was an untold part of the Southern Colorado story, an area of intricate political geography made more complex by deeply-rooted histories. The region was once New Spain, then Mexico and then the northern frontier of the U.S. territory of New Mexico until 1861, when the territory of Colorado was created.

Fort Garland sits at the base of Mount Blanca, or Sisnaajini, a sacred mountain on the eastern boundary of Dinétah, the Navajo homelands. Inside, the creaky old floors of the commandant’s quarters lead to a hushed historical realm filled with images and documents of enslaved Native children who were stripped of their birth names and cultural identities. At the entrance is a photograph of 12-year-old Gabriel Woodson, a Navajo boy who was forcibly taken and then sold by Utes in 1860 to James Bernard Woodson, a businessman, and was gussied up in western attire for his portrait.

The creator of “Unsilenced,” as well as a second installation at a nearby slave site, is Chip Thomas, a 64-year-old Black physician who has spent 34 years working at a primary care clinic on the Navajo Nation. He is also an artist, known locally for deploying his black and white photographs of corn, sheep, elders, activists and others on abandoned water tanks, grain silos, Quonset huts and other vernacular structures. The intention of his work here is to “reflect the beautiful and strong parts of the culture back to the community,” he said.

In “Unsilenced” his installations draw on a detailed and chillingly dispassionate survey from 1865, rendered in impeccable penmanship, of 149 Indigenous people who were taken from their native communities into servitude. The youngest is a 3-year-old.

The list was compiled in the San Luis Valley by Maj. Lafayette Head, a federal agent who became the first lieutenant governor of Colorado. Head recorded the names and tribes of the enslaved, their “owners,” the date and source of purchase, and their willingness (or not) to return to their tribes. The list, in the National Archives in Washington, D.C., was digitized by Estevan Rael-Gálvez, a former New Mexico state historian and consultant to the museum who is assembling a database of Indigenous slaves.

In “Unsilenced,” fragments of what Thomas calls the “beautifully written document of horrible acts” are digitally printed on diaphanous fabric, with an image of an unknown Navajo captive boy looming behind it.

The presence of the lists in Commander Carson’s quarters is grimly apt. The majority of “Indian Captives Acquired by Purchase” were Navajo, forcibly removed by Carson from their homelands. It was an act that Col. James H. Carleton, who gave Carson his orders, compared to a chase for wild game.

The disastrous 250- to 450-mile “Long Walk” to wretched internment in Bosque Redondo, N.M. — what Navajo people have called “the Fearing time” — was a golden moment for slavers. Historians estimate that 1,000 to 3,000 Navajo, mostly women and children, were captured by Ute and Hispanic raiders and then traded, often for a horse or a gun.

For 70 years, the museum glorified Carson in period rooms stuffed with hunting trophies. “Unsilenced” introduces Juan Carson, his enslaved Navajo “son,” and one of three captive Indigenous servants in the household. Juan was 3 years old when Carson’s wife, Josefa Jaramillo, offered a horse for the child after the Utes threatened to kill him, or so the story goes. (Kit Carson Jr., the couple’s son by birth, indicated that his father had adopted Juan).

Forced assimilation was the modus operandi of Anglo and Hispano colonizers. Stolen children like Juan were baptized and given a Christian name. The justification was redemption, to transform them into “a white and delightsome people,” as Brigham Young, the Mormon Church leader and first governor of Utah, put it.

“We are at a moment in which we’re looking at the hard history of our nation and these atrocities of the human experience,” said Mary Elliott, curator of American slavery at the National Museum of African American History and Culture in Washington, D.C. “The history is there in the records. We’re illuminating that history and telling these more nuanced and complex stories.”

The stories reverberate across generations in what Rael-Gálvez, the Fort Garland consultant, calls “a heritage of converging streams.” It is seen in the blanket that hangs above his dining table, woven by his mother’s ancestor, a Navajo captive who was abducted and brought to a household in Abiquiu, N.M., where “Genizaros,” or Indigenous people, were taken into Hispanic households as indentured servants.

Today, the resulting culture in the San Luis Valley and northern New Mexico is “a strange blend born of violence,” said James F. Brooks, a historian and author of “Captives and Cousins: Slavery, Kinship and Community in the Southwest Borderlands.”

Sitting at Fort Garland in a bright pink sweater, Theresa Valdez Maestas, 76, who came to take part in the healing ceremony, told of her 20-year search to untangle the history of her great-great grandmother, Maria Rita Gallegos Chacon, known as Mama Rita. Rita, born Navajo, was found hiding behind a fallen tree after her mother was shot in the back with an arrow. The man who discovered Rita, Manuel Antonio Gallegos, and his wife, Bibiana, treated her as a daughter, Valdez Maestas said. “But she was always given to understand that she was a servant, a criada,” she added.

When the couple’s daughter Maria married, they sent Rita to be the newlywed’s maid. Maria died in childbirth and shortly thereafter, Rita became pregnant by Maria’s husband, Jose Prudencia Chacon. “He was a busy boy,” Valdez Maestas noted. Chacon married Rita a week before the first of their six children was born. In “Unsilenced,” Mama Rita’s photograph sits above a fireplace, her hands folded neatly on her lap. “I kept looking and looking and looking for her,” Valdez Maestas said.

Laura Bertha Tolmich sewed a traditional ribbon dress for the healing ceremonies at the museum. Her great-great-great grandmother, Maria Guadalupe Benevidez Tolmich, was born Apache and kidnapped by another tribe. She was sold to and raised by a Spanish family and eventually married a Hungarian-born Union soldier in New Mexico territory. “She’s still in me,” said Tolmich, who tends her ancestors’ graves. “She brought me here so she could be cleansed.”

The Fort Garland exhibition, which Professor Brooks calls “a courageous act of public history,” was developed by the museum in collaboration with community members. For several years, the institution had been grappling with“the generational trauma in the stories that have been passed down,” said Eric J. Carpio, its director. The museum became aware of Thomas through a 2018 installation he had done at a historical schoolhouse nearby.

A devotee of New York street art and a member of Justseeds, an international printmaking cooperative, Thomas grew up in Raleigh, N.C., the son of a doctor and a teacher, and went to a Quaker school that immersed him in social justice issues. He received a scholarship to attend Meharry Medical College, a historically Black college in Nashville; in exchange he spent several years in a medically underserved community — the Navajo Nation — and wound up staying.

He considers medicine and art interwoven: both create “an environment of wellness,” he said. In 2012, he created the Painted Desert Project, in which fellow artists work with young people on the Navajo Nation and create public art.

“Chip isn’t afraid to show what real-life situations are on Navajo,” said Nonabah Sam, a museum curator at Diné College in Tsaile, Ariz. “People see his photos going up on these buildings and they don’t touch them,” she added. “The respect for cultural life is definitely there.”

In Conejos, Colo. (pop. 23), where Lafayette Head lived while compiling his inventory of Indian captives, Thomas has turned the compound into his canvas, inside and out. Although Head called slavery a “barbarous and inhuman practice,” he conveniently left one slave-owning household off his lists — his own. Thomas transformed the earthen walls of the facade of what is believed to be the family’s slave dwelling with Head’s cursive writing, seeming to obliterate it. (Some peers accused Head himself of being a trafficker.)

The compound, which is private, was bought and is gradually being restored by Ronald Rael, an architect and professor at the University of California, Berkeley College of Environmental Design, who grew up down the road. Thomas’s installation continues inside, where the light through periwinkle-blue windows throws Head’s bleak tally into bas-relief.

On the parade ground at Fort Garland, the descendants of those who had been enslaved gathered around a young white pine tree, a symbol of peace connecting to the sacred eastern mountain of the Navajo people. Women prepared and planted it in recognition of the violence that continues to plague Indigenous females. It was a means to begin burying the false narratives of the past, a tree of truth.