A Time Capsule Beneath a Lee Statue Reveals More Mysteries 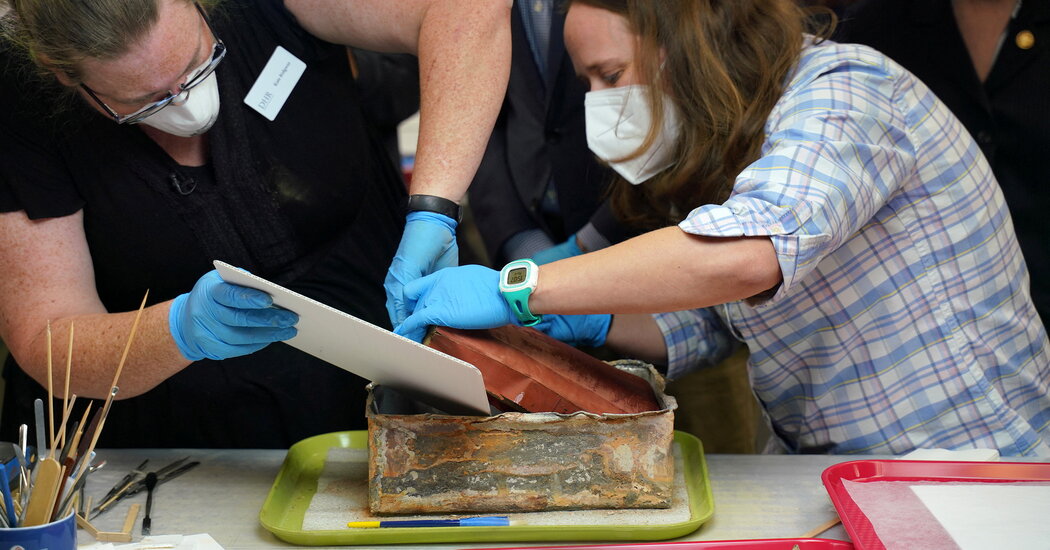 After about five hours of meticulous prying and poking, the time had come on Wednesday afternoon for Gov. Ralph Northam to lift the lid of a time capsule that had been hidden beneath a statue of Robert E. Lee in Richmond, Va., since 1887.

The hands of Kate Ridgway, one of the conservators doing the prying and poking, had begun to blister.

“No pressure,” she told Mr. Northam.

Inside, they found unexpected and seemingly random items: an 1875 almanac, a waterlogged book of fiction, a British coin, a catalog, one letter and a photograph of James Netherwood, a master stonemason who worked on the Robert E. Lee pedestal.

“We have not yet made sense of why this assortment was placed in the box,” said Julie Langan, director of the Virginia Department of Historic Resources. “It’s an odd assortment.”

The time capsule was first recovered last week by historians, who had failed to find it in September, when the statue was taken down. They strategized over the weekend about how to delicately recover the container from the 1,500-pound block of granite that it was nestled in.

But after an X-ray scan and careful chipping with power saws and wedges, the removal process was over.

The time capsule, however, was not the coveted one that was described in newspaper accounts from 1887, a capsule which was reportedly placed beneath the same statue and rumored to contain a rare photo of Abraham Lincoln in his coffin, Ms. Langan said.

“The question remains: Well, what happened to that one?” she said.

Even Mr. Northam seemed enthralled with the mystery, posting several updates on Twitter about the opening.

When Chelsea Blake, a conservator with the state’s historic resources agency, gingerly removed a cloth envelope from the lead container, Mr. Northam turned to her and asked, with raised eyebrows, “Could that be the picture?”

Some state officials had watched the entire five-hour operation.

“It was really surprising,” Ms. Langan said. She added that it “kind of felt like having company at my house, all these people had descended. It was fun.”

The time capsule they had anticipated finding might have been removed at some point without record, stolen or never installed, Ms. Langan said.

“I think some people are maybe a little disappointed, but it seems that most people are very engaged and intrigued by this time capsule and wondering, ‘What does it mean? What does it signify?’” she said. “It’s a puzzle.”

Since one of the items found in the capsule was a photo of a stonemason, Ms. Langan said, the answer might be that some of the workmen got together and privately put some of their mementos in the statue for posterity.

The items will be treated and stabilized this week to prevent deterioration. They will most likely be placed in a museum after researchers attempt to answer some of the questions surrounding the capsule, including why the fiction book “The Huguenot Lovers: A Tale of the Old Dominion,” by Collinson Pierrepont Edwards Burgwyn, was placed inside. And why is there a British coin?

“I’m not disappointed in how this day has gone,” Ms. Langan said, “because it’s been really wonderful to see people get so excited about history.”