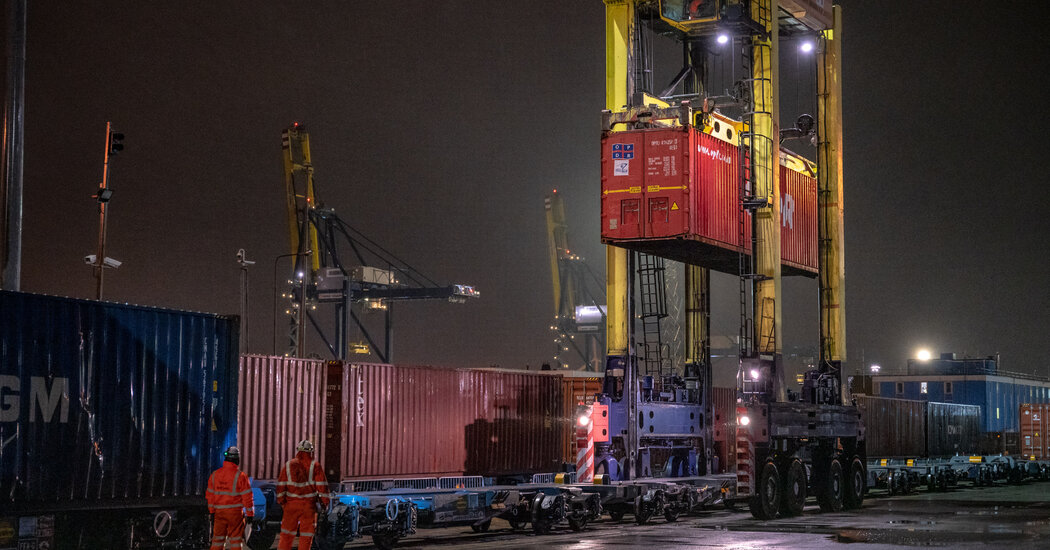 TILBURY, England — It is called the “wine train,” and every weekend it rumbles out of the port of Tilbury, east of London, on a 100-mile journey to a depot in central England. It looks pretty much like any other freight train, but it carries an unusual cargo: Almost 650,000 bottles of wine.

This 32-car, 1,600-foot-long traveling wine rack is the latest, and one of the more creative, answers to the supply shortages that have bedeviled Britain and caused the government to fret about disruptions to the Christmas holiday.

On Saturday night, in biting winds and rain, a small team of workers used giant machinery to lift heavy containers filled with wine into place before the latest departure. Working beneath floodlights, they carefully maneuvered cargo that had arrived by ship onto the train bound for a terminal in Daventry from where it will be distributed to some of the country’s leading supermarkets.

The wine train has been running from this busy port for a month or so, reducing the reliance on truck drivers, who have been in short supply in Britain, and ensuring that Britons will at least have a decent stock of alcohol during the holiday.

But two months after gas and food shortages caused shudders of anxiety across the country, Britain continues to face challenges in its supply chain. A lack of truck drivers, combined with global shipping delays, product shortages, the pandemic and Brexit restrictions, have left some supermarket shelves bare and retailers warning that not every Christmas gift will be available.

The worries about the holiday season have only been worsened by the discovery of two cases of the new coronavirus variant in Britain. On Saturday, Prime Minister Boris Johnson said masks would be mandatory in shops and on public transportation and that travelers arriving from abroad would face some new rules. But he said he was confident that Christmas would be “considerably better” than last year.

Businesses including toy shops, coffee shops and butchers report being short-staffed, and about seven in 10 people have reported differences in food shopping, including finding less variety in stores, according to government data released last week. Shortages are patchwork and random across the country, adding to the guesswork.

On Wednesday, the Cold Chain Federation, which represents firms that store and distribute frozen food, warned that consumers could have fewer choices this Christmas.

Amid continuing disruption, the government says that it is determined to “save Christmas” — as some British newspapers have put it. On Tuesday, one senior minister, Stephen Barclay, assured colleagues at a cabinet meeting that there would be enough turkeys for festive dinners. That was in doubt just weeks ago when farmers were warning of shortages.

“Essentially, the problems continue unabated, and although they have dropped out of the headlines, that doesn’t mean that things are any better,” said Ian Wright, chief executive of the Food and Drink Federation, a group that represents more than 800 companies in the sector.

He said that his members had been used to 97 percent of their orders arriving on time, but that now, one-fifth of items will not show up when expected — and which ones will be missing is anyone’s guess, he said.

“Things are very VUCA, at the moment,” he said, using an acronym that stands for volatile, uncertain, complex and ambiguous. He cited the pandemic, labor issues and lockdowns abroad — events which, like a rock landing in a pond, can send out ripples worldwide.

As for Brexit’s impact, Mr. Wilding described it as “the cherry on a very nasty pie,” because it has caused extra disruption just as the pandemic accelerated the transition to the digital economy, putting new pressure on supply chains.

Patrick Adom, the founder of Very Puzzled, which sells jigsaw puzzles with maps and other illustrations of Africa and India, said that this year he has shipped just 200 products to stores and customers in the European Union; that’s down from about 2,000 a year ago, when Britain was still in the bloc.

The global shortage of shipping containers, Mr. Adom said, has driven up the cost of sending puzzles from the factory in China, where they are made, to Britain by 30 to 40 percent, compared with early in 2020. Even once the products arrive in Britain, their onward journeys have been delayed because of the lack of truck drivers and the fuel shortages, he said. He added that Brexit had also led to higher export fees and increased administrative hassles.

“Just when you’re getting into your rhythm, new challenges present themselves,” Mr. Adom said, adding, “It’s been a real storm, basically.”

At After Noah, a furniture and toy shop in North London, Matthew Crawford, the director, said that he had been forced to order nearly double the usual amount of stock in the prelude to Christmas to compensate for shipping delays. Prices are higher, but the company has absorbed them rather than pass them on to customers because of steep competition from online retailers, he said.

“Almost everybody we know is having difficulty getting stuff into the country,” Mr. Crawford noted.

And the bureaucracy can be crushing, Mr. Crawford added. When imported items arrive at British ports from the European Union, he now has to identify items individually, as well as the materials they are made of, to the British government. Details like what type of glaze is used on mugs will cause tariffs to change, he said.

Mr. Crawford said that After Noah had also struggled to recruit workers for the first time in its 31 years, a challenge he attributed to Brexit and the desire among E.U. workers to be closer to their families during the pandemic.

The government has offered short-term fixes for certain sectors to ensure that the shortages do not disrupt Christmas celebrations. In September, for instance, it made available 5,500 short-term visas to poultry workers from the E.U., trying to ensure that turkeys would be on the Christmas table. More than 2,500 workers arrived, according to the British Poultry Council, a trade group.

Ranjit Singh Boparan, owner of the turkey producer Bernard Matthews, said that up to 900 seasonal workers, mostly from Eastern European countries, had joined the company in recent weeks to work at its processing facilities in East Anglia.

“We’re well on the way to plugging the job gaps for the massive volume increases we get during this time of year,” he said in a statement issued last week. While he praised the short-term visa plan, he urged the government to issue visas for longer periods. “Labor as a key structural challenge for our sector is here for 12 months of the year, and it’s one that’s not going to go away,” he said.

Not all food producers have been as satisfied with the government’s response. Members of the British Meat Processors Association are getting “more and more desperate,” said Jon Hare, a spokesman for the group, which represents most of the companies working in the British meat industry.

“If anything, the situation has gotten worse,” Mr. Hare said, adding that competitive offers from other parts of the food and hospitality industry had made it hard to hold onto employees.

Wine distributors are not the only businesses getting creative to ensure that their products reach customers in time for holiday parties. One supermarket chain, Tesco, has started using a rail service running from Valencia, Spain, through France, to Barking, near London, to transport lettuce, fruit and vegetables.

Tesco also transports supplies on the giant wine train. And Freightliner, the company that runs the train, said in a statement that it was receiving more enquiries to move goods by rail — because of the trucker shortage and a desire to decarbonize the transportation of goods.

Freightliner suggested that the weekly deliveries on the wine train — whose cargo takes several hours to load — had not yet satisfied the demand during the holiday season.

“We are looking to increase the frequency of this service to daily,” the company said.