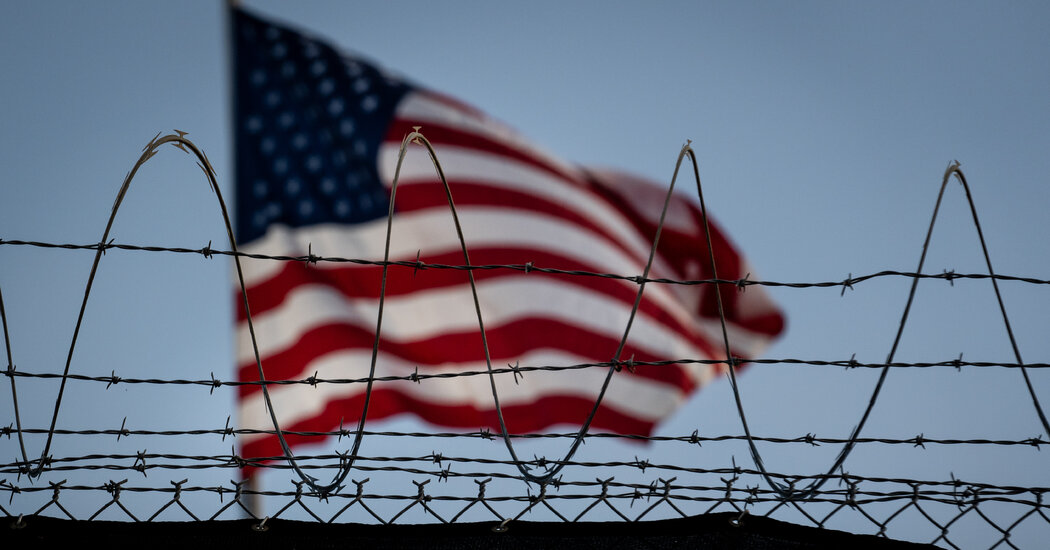 GUANTÁNAMO BAY, Cuba — A defense lawyer on Wednesday invoked the bedrock American right to confront one’s accuser as he asked a military judge to permit the accused mastermind of the Sept. 11, 2001, attacks to attend secret testimony by two psychologists who waterboarded him 183 times.

The argument illustrates the on-again, off-again nature of the war crimes proceedings, whose rules generally exclude the defendants from classified testimony in the pretrial phase.

The psychologists, both former C.I.A. contractors, began testifying in open court in January 2020. But their return to court to resume testifying has been on hold in part because the judge who heard it abruptly announced his retirement two months later, and in part because the pandemic paralyzed the proceedings for more than 500 days.

The overarching issues are whether admissions that the defendant in this case, Khalid Shaikh Mohammed, made years after the waterboarding were tainted by torture, and whether they can be used as key evidence in an eventual trial.

The psychologists, James E. Mitchell and John Bruce Jessen, were called to describe their use of “enhanced interrogation techniques” — which included waterboarding, bashing a prisoner’s head into a wall, extreme isolation, sleep deprivation and forced nudity — in a secret overseas C.I.A. prison network in 2002 and 2003 to “condition,” as Dr. Mitchell testified, captives to answer questions on demand.

Dr. Mitchell said that the defendants had gained their free will by the time they were questioned by FBI agents at Guantánamo Bay in 2007. The psychologist testified that even before Guantánamo, Dr. Mitchell and Mr. Mohammed would at times sit together and chat while holding hands, as Middle Eastern men sometimes do.

Defense lawyers argue that the five defendants in the case were still so fearful that they could be tortured again that they told FBI interrogators at Guantánamo Bay what the C.I.A. conditioned them to say. They have asked the judge to exclude the interrogations as the product of systematic U.S. government abuse.

In the short term, the question is whether Mr. Mohammed can watch when Dr. Mitchell returns to the court to testify in a closed national security session. No date for that session has been set.

Defense lawyers also argue that, because this is a death penalty case, the defendants are entitled to greater protections, including the right to attend secret testimony about which they might have knowledge. Prosecutors argue national security is at stake because the C.I.A. still retains certain secrets about its overseas black site program, which began in 2002 and ended in 2009.

The judge, Col. Matthew N. McCall of the Air Force, inherited the question from his predecessor, Col. W. Shane Cohen, who abruptly retired after Dr. Mitchell testified in open court across nine days in January 2020, and Dr. Jessen for one.

A prosecutor, Maj. Jackson T. Hall of the Air Force, said a person must have a security clearance to attend a classified war court session, meaning both the public and the defendants are barred. He cited just one exception — an accused terrorist can hear the classified information if it is something that the accused terrorist said.

He added that previous military judges had excluded the defendants from classified pretrial hearings for the past seven years, and urged Colonel McCall not to deviate from that practice.

Major Hall accused defense lawyers of engaging in “graymail,” essentially arguing that, in order to achieve a fair trial, the government had to choose between disclosing state secrets or being sanctioned by the judge, possibly including a dismissal of the case.

Mr. Mohammed’s lawyer, Gary D. Sowards, said his team needed the defendant in court to hear secret evidence about the C.I.A. black site program — and the psychologists’ role in it — to guide their questioning of the men, based on Mr. Mohammed’s experience as a prisoner of what he called the “international gulag archipelago of torture chambers” from March 2003 to September 2006.

“Mr. Mohammed already knows about the grisly details of his torture and what happened to him,” Mr. Sowards said. “That’s what we’re talking about.”

Major Hall cited a similar exclusion in the federal proceedings from 2002 to 2006 against Zacarias Moussaoui, an admitted aspiring hijacker in the Sept. 11 attacks. During a period when he represented himself, the prosecutor said, Mr. Moussaoui was denied access to classified information that was favorable to his defense. In that example, he said, Mr. Moussaoui had a standby counsel who could see the classified information but not tell the defendant about it.

Mr. Sowards said the need for Mr. Mohammed to hear the testimony live was made clear after the defendant was excluded from the deposition of a former C.I.A. interpreter who lied about his background and ended up working for a defense team. The defendants in the case recognized the interpreter at a court session in 2015, and then exposed his prior clandestine status in open court.

No date has been set for the actual start of the trial of Mr. Mohammed and four other men who are accused of conspiring in the 2001 attacks that killed nearly 3,000 people when terrorists piloted hijacked commercial planes and crashed them into the World Trade Center, the Pentagon and a Pennsylvania field.