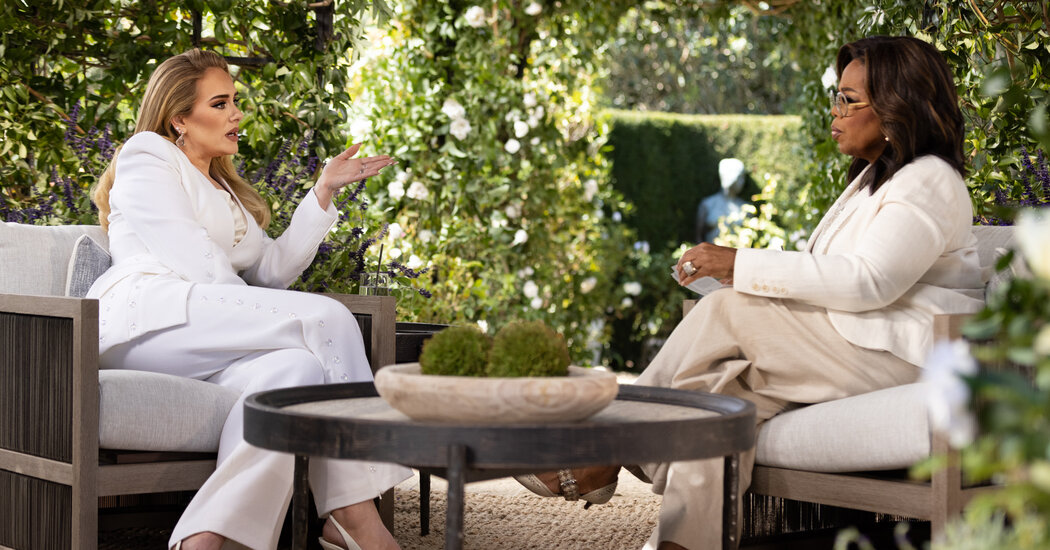 As the re-emergence of Adele continues with the one-two punch of an Oprah Winfrey interview and a “One Night Only” concert at the Griffith Observatory in Los Angeles in front of a starry, starry crowd — all in prelude to an album release on Friday — so, too, does her mastery of the art the image; her message of post-divorce strength and freedom as told through every performative tool at her disposal. Including her lyrics, her interview and (yes) her clothes.

Not so much the black taffeta Schiaparelli mermaid gown she wore to take the stage for her concert, but the white pantsuit she wore for her one-on-one with Oprah.

The white pantsuit she wore, for example, while she talked about leaving her marriage “and finding my own happiness,” about the joy of lifting weights, about stopping drinking, about feeling secure in her new self, about owning her own body image and not bothering with what other people thought.

A white pantsuit: It has increasingly been the single garment most associated with women’s liberation and empowerment on the public stage. At this point, it’s a symbol as much as an outfit.

If anyone thought the garment was a rebellious relic of the Trump era, this has just broadened its resonance instead.

The emergence of white pantsuit as cultural shorthand began in the 2016 election, when Hillary Clinton took to the stage at the Democratic National Convention to accept her party’s nomination for president in white Ralph Lauren, drawing a direct connection from her position to the history of the suffragists (one of whose official colors was white) and women’s fight to have their voices heard.

It was then adopted as a uniform during the election itself by women who were urged to #wearwhitetovote. Next, it became a sign of opposition during President Donald J. Trump’s first State of the Union to his more retrograde ideas about gender (even Melania Trump wore a white pantsuit in her first appearance after the public learned of the Stormy Daniels affair, in what many speculated was an apparent rebuke to her husband). Nancy Pelosi wore a white pantsuit when she stood in the halls of Congress to announce the House would begin drafting articles of impeachment against President Trump; Alexandria Ocasio-Cortez on her Vanity Fair cover; Kamala Harris, when she became vice president-elect.

(White suits also made a much-heralded appearance at the end of the 1996 movie “The First Wives Club,” in which Diane Keaton, Goldie Hawn and Bette Midler play women who team up to take revenge on their exes and do a rousing finale version of “You Don’t Own Me” wearing, yes, white suits.)

It is possible Adele simply liked the idea of wearing white, with its connotations of fresh starts and wiping the slate clean, or thought it would it would look good against the greenery of the garden where her sit-down with Oprah occurred — though maybe she wasn’t thinking about history at all. But it is also true that the look she chose, by the young Black designer Christopher John Rogers, who only a few days before the show had been named women’s wear designer of the year by the Council of Fashion Designers of America, was originally … a skirt suit. It had been Look 39 from his resort 2022 collection, otherwise known as Collection 008, and the only white style in a collection otherwise notable for its use of bright colors.

Adele had it customized to become a pantsuit. Given the theme of her album, called “30,” and the Oprah conversation, it seemed pointedly apropos. (So much so that Oprah herself actually decided at the last minute to change her outfit from a bright apricot Sally LaPointe suit to a neutral Brunello Cucinelli.)

Especially since, as Adele told Oprah, she had previously “Never worn white. I’m wearing it for you.”

And as a result, this symbol of solidarity leapt from Washington into the world at large.