Afrofuturist Room at the Met Redresses a Racial Trauma 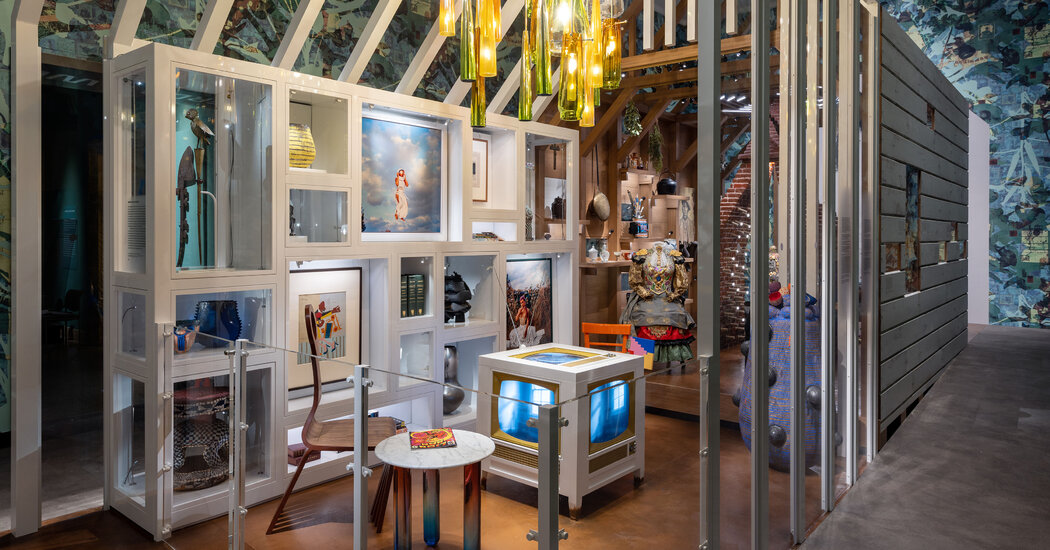 More than a year after the racial reckoning, the Metropolitan Museum of Art has created one of its most thoughtful reparations projects yet.

I do not mean its returning of some priceless artifacts back to West Africa, or its addressing of past racial wrongs with a restitution fund to support diversity in the arts, or the acknowledgment by Dan Weiss, its president and chief executive, on the one-year anniversary of George Floyd’s police killing, that “the Met is a brilliant institution that has fallen short on these issues of race, equity and justice.”

I mean something far more speculative, and symbolic. Its newest installation, “Before Yesterday We Could Fly: An Afrofuturist Period Room,” boldly grapples with one of New York City’s biggest racial traumas: the 1857 destruction of Seneca Village, a vibrant, predominantly free Black community whose members had owned land along West 82nd to West 89th Streets starting in 1825, but were forced out in order to make Central Park. A racist smear campaign targeting the community in 1856 described its housing structures as shanties and its living conditions there as unhygienic and poor. The city used these stereotypes to further justify its need to purchase the land through eminent domain.

As much as this exhibition looks backward, the room is also steeped in the present. The Met, breaking with its own tradition of the immersive “period room” shaped by a particular period of time or genre of decorative arts, has envisioned a counterfactual fable: The room here belongs to a Seneca Village resident, a Black woman and her family, left undisturbed, and able to maintain the dignity, safety and suffrage that were the results of their landowning. Most strikingly, the room’s ornateness underscores the toll of the city’s loss, and the consequences of denying Black people the ability to pass on their wealth across generations.

The installation consists of a breathtaking re-creation of one of its resident’s homes as it might have existed in her own day, our time, and in some distant future. The farsighted curatorial team led by Hannah Beachler, the first African American to win an Oscar for production design for “Black Panther,” collaborating with the Met curators Ian Alteveer and Sarah Lawrence, and Michelle Commander, the consulting director and literary scholar, not only give Seneca Village a far more empowering ending than the one it met, but enable us to have a glimpse of what could be.

The exhibition takes its name from the 19th-century legend of the Flying Africans, passed down by generations through oral histories, about a group of West Africans who resisted their enslavement in the New World by flying back home from the Georgia coast. The myth inspired Virginia Hamilton’s classic children’s book, “The People Could Fly” in 1985, and other artists. This installation gestures more toward the fantastic with a few hints of flight.

Consisting of a house, whose clapboard style recalls the exterior of a 19th-century Seneca Village home, while its open floor plan connecting the living room and the kitchen evokes our free-flow interior designs of today, the room also features wallpaper by the Nigerian-born artist Njideka Akunyili Crosby — “Thriving and Potential, Displaced (Again and Again and…).” This inkjet vinyl print, one of three commissioned works for the installation, is a collage that includes a survey map of Seneca Village, images of artifacts discovered during an archaeological dig at the site in 2011, vintage photographs, called ambrotypes, of 19th-century Black New Yorkers, and repeating silhouettes of okra. The presence of the plant, in all its varying shades of green, also marks time as a remnant of the Old World brought to the Americas by enslaved Africans during the Middle Passage and is suggestive of the dense foliage that envelops Central Park now and protected those Black villagers back then.

Afrofuturism, invoked in its subtitle, is a fantastic, otherworldly, or science-fiction-based aesthetic that imagines a better, freer world for Black people. Such temporal and spatial collapses are at the heart of this entire experience, an act that might impart some small form of memory justice to those modern-day descendants of Seneca Village who remain unknown to us today and whose ancestors’ stories were largely forgotten until Roy Rosenzweig and Elizabeth Blackmar’s 1992 social history, “The Park and the People: A History of Central Park.”

I find such aesthetic gestures, though well-meaning, only partly fulfilling, and largely a reminder that art can only go so far in redressing the tragedy that is American racism.

The Met’s real atonement is with its reliance on the traditional period room, a genre that is increasingly scrutinized by critics for its whitewashing of history.

“Every period room is a fiction, right,” Sarah Lawrence, ​​the Met’s curator of European Sculpture and Decorative Arts, told me during my visit. “It has a veneer of authenticity.” As she acknowledged, “Every single period room is bringing together floors, ceilings, objects that never were actually together at the same time. So, if we acknowledge the fiction, how can we use that as an opportunity to bring stories in our museum that otherwise are left out of our period rooms?” Later, she added, “We have an amazing range of period rooms, but for the most part, they are white affluent Eurocentric interiors.”

In 2017, the Met began actively experimenting with its own period rooms by reconstructing the finely detailed, all white closet of Sarah Berman — an early 20th-century immigrant who traveled from Belarus to Palestine — and placing it next to the recently installed Worsham-Rockefeller Dressing Room from 1882. The result was a dialogue about the excess and simplicity of modern life.

But “Before Yesterday We Could Fly” is far more transformational, because it gives the museum a real chance to rethink the entire premise upon which the period room was based — verisimilitude to the past — and embrace how the racial contradictions of New York City’s history and the utopian aspirations of Seneca Village continue to shape our country today.

Nothing achieves this crisscrossing of time better than Jenn Nkiru’s five-sided television that sits in the middle of the living room. Running a short black and white film featuring archival footage, re-enactments of a 19th-century African American Seneca Village family dining together, and an elder Black, or griot figure calling out “Seneca/Senegal,” the television is both analog and avant-garde — African Diasporic yet thoroughly domestic, and disruptive to the very ideas of periodization, or for that matter, nationhood.

But the longer I stayed in the room, the more engrossed I became in its vast assortment of domestic items. To name just a few: a rubber hair comb patented by Charles Goodyear in the 1850s; Willie Cole’s 2007 “Shine” artwork, an assemblage of black high heel shoes sculpted in the tradition of a West African mask; Cyrus Kabiru’s 2020 sculpture “Miyale Ya Blue,” a recycled boombox decked in red, yellow, turquoise with its nine antennas hinting at the intergalactic while also curved in the shape of a crown; Elizabeth Catlett’s 1947 linocut of Sojourner Truth; or a 17th-century crucifix from the Kongo region. The collection was not dizzying but rather deliberative. Ultimately, these temporal juxtapositions became a form of continuity for the entire room.

Whether such an exceptional approach to the period room is an outlier or will radically alter the fate of the museum‘s overall approach to similar installations remains to be seen.

The grace and grandeur threading together these disparate times, items, mediums are most fully on display in a new commission by the Met, the Haitian artist Jean-Louis Fabiola’s “Justice of Ezili,” a sculptural dress made of paper sheets and clay, 24-karat gold, Swarovski crystals and resin. Belonging to the fictional Black woman whose home we are visiting, it makes the rupture between what was and what was denied to its real life inhabitants more stark and stunning.

In this sense, it is good that “Before Yesterday, We Could Fly” is self-aware enough to know it cannot remedy such a trauma. Rather, it is really a generative addition to those ongoing conversations about racial justice, healing and repair that cultural institutions like the Met, and everyday people all over the country, were asked to have at the height of Black Lives Matter in 2020.

Ideally, the room itself is so immersive and suggestive that its viewers end up going just a few minutes away to visit the sites in Central Park where Seneca Village once stood, and find that clash between historical erasure and artistic speculation, forced displacement and Black Freedom dreams to be so jarring, and unjust, that we all grieve and begin the hard work of economic and emotional repair.

Before Yesterday We Could Fly: An Afrofuturist Period Room

This is an ongoing exhibition. Metropolitan Museum of Art, 1000 Fifth Avenue, (212) 535-7710; metmuseum.org. Entry to the museum is by timed ticket. All visitors age 12 and older must be vaccinated against Covid-19.