After Upheaval, MOCA Bets on Johanna Burton to Bring Stability 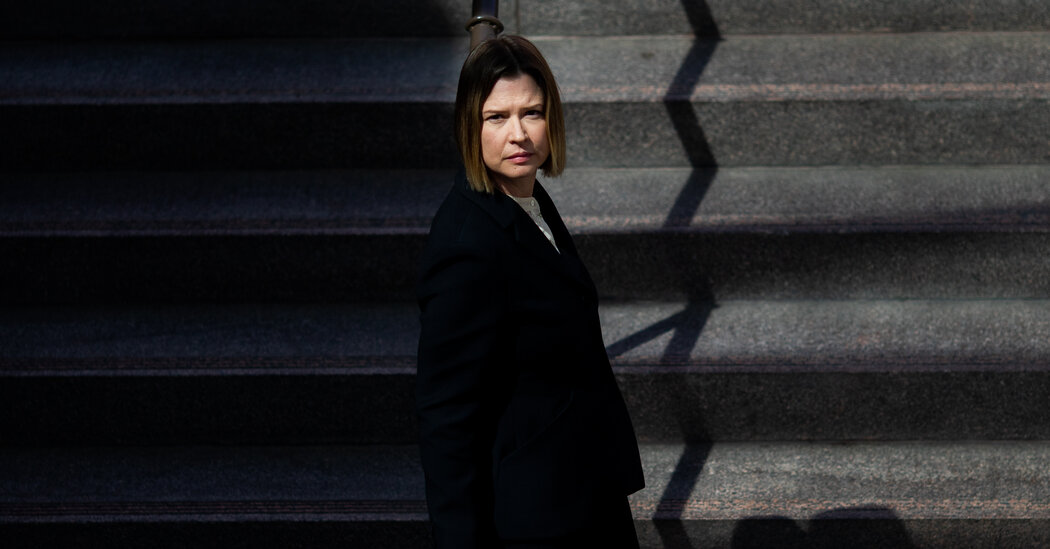 LOS ANGELES — The Museum of Contemporary Art, with its enviable collection, has long been a symbol of California’s flourishing arts scene, and it helped spur the resurgence of a once barren patch of downtown Los Angeles. But waves of management upheaval have damaged its reputation and raised questions about its prospects at a time when arts groups all over the country are struggling to regain their footing after the disruptions of the pandemic.

Now, the future of MOCA — which once set the pace here and in much of the country in collecting and displaying contemporary art — rests on a somewhat unlikely savior: Johanna Burton, who was named director in September amid the latest spasm of organizational turmoil.

Her path to becoming the museum’s first female director since its founding in 1979 was unusual. Burton was brought on Sept. 3 as executive director to deal with what the museum’s board saw as the management shortcomings of her predecessor, Klaus Biesenbach, a high-profile figure in the museum world who seemed to personify the flashy intersection of the arts and Hollywood. The plan was for them to share duties. But in less than two weeks he quit to run a museum in Berlin and Burton was given the top job. In a recent interview Burton said her most urgent priority — and biggest obstacle — was ending the turbulence that has plagued the museum for over a decade.

“You’re putting your finger on something that I think actually is one of my prime concerns, which is — as unsexy as this sounds — really prioritizing stability,” she said in her office overlooking the museum plaza and Grand Avenue. “It’s what the museum needs. It’s what the staff needs. People love MOCA. I’ve had lots of conversations with people who just want to see it do well and they believe in it. But I think that the lack of stability has also led to maybe the lack of a cohesive picture of what the institution does.”

This is not to say that Burton intends to be a low-profile presence in a city where museum executives — like Biesenbach or Michael Govan at the Los Angeles County Museum of Art — cultivate their own kind of celebrity. “I feel like I’m sort of the opposite of that,” Burton said. But, she added, “I think that I am flashy in my own way.”

Burton is the fifth person to fill the top job since 2008. The remarkable rate of leadership churn is widely seen as having hurt MOCA’s credibility with donors, artists and the public at a time when other institutions, like the Broad, LACMA, and the Hammer Museum — as well as galleries like Hauser & Wirth — have energized the city’s world-class arts scene.

MOCA has been through the wars. It weathered a raid on its endowment to pay the bills and staved off a proposed merger with LACMA. And in addition to moving rapidly through four directors in recent years — Jeremy Strick, Jeffrey Deitch, Philippe Vergne and Biesenbach — it saw the very public departures of two important chief curators, Paul Schimmel and Helen Molesworth.

Maria Seferian, the chairwoman of MOCA’s board of trustees, said in an email that Burton was “unique in her own right,” adding, “She has the unanimous support of a strong and cohesive board.”

Burton comes to MOCA buoyed by the good will of the art world. Many say her low-key profile will be a welcome antidote to MOCA’s showier predecessors (Biesenbach was known for posting Instagram photos of himself with celebrities like Patti Smith, Yoko Ono and Lady Gaga).

“She puts the institution before herself and doesn’t have to be the one with all the ideas, but she’s also strong and decisive,” said Adam D. Weinberg, director of the Whitney. “She’s the kind of person who’s in it for the long haul and understands it’s going to take years to rethink the institution.”

“Panache without the foundation doesn’t cut it,” Weinberg added. “You need to build a foundation first.”

Burton, 50, is something of a departure for MOCA’s governing board of artists, business leaders and politicians, given the kind of directors that have drawn their interest in the past. Although she has considerable museum experience — most recently as director of the Wexner Center for the Arts in Columbus, Ohio — Burton has spent most of her career in education, and has several advanced degrees in art.

She was associate director of the Whitney Independent Study Program; ran the graduate program in curatorial studies at Bard; and served as the head of education at the New Museum. Acknowledging that the word “education” can “make some people’s eyes glaze over,” Burton said that the educational role of museums has become particularly important now, amid the national reckoning around issues of diversity, inclusion and accessibility.

“Museums are really kind of reassessing themselves,” she said. “The kind of work I was doing in that sphere for a really long time feels like it’s becoming more centralized.”

Soon after Burton was appointed to the museum in September to provide some managerial ballast, Biesenbach, whom the museum had expected to share duties with her, quit to take a prestigious job running the Neue Nationalgalerie and the future Museum of the 20th Century in Berlin. The board — stunned and embarrassed by his departure, since he had given them no warning — handed the full director job to Burton. Having initially announced that the director’s position would be better divided in two, the museum shifted gears, saying that Burton on her own had “the full faith and confidence of the museum to lead MOCA into the future.”

The museum’s longest-serving director, Richard Koshalek, who ran it from 1983 to 1999, called Burton a good fit. “It’s a balancing act,” he said, “and she’s going to be able to balance the many conflicting forces that exist at MOCA.”

Most crucial now, in the view of artists and art administrators who have long followed the museum: the board needs to give Burton time and space to chart a course and pursue it. “MOCA has gone through so many directors and has been so impatient with its leadership over a decade now,” Schimmel said. “A museum of that size really needs leadership that is coherent. That’s been one of the real challenges: Who’s running the place?”

Indeed, several art world observers question whether the board has contributed to the museum’s problems, either by being overly hands-on or insufficiently unified. Seferian, who stepped in to serve as its interim director in 2013 after Deitch left, signaled that she is planning to give Burton latitude. “Over the years, my personal involvement with MOCA has changed depending on the circumstances,” Seferian said.

Whether Burton has the kind of relationships with artists, and the bold exhibition ideas that make for exciting programming, remains to be seen.

Also unclear is whether she can change the makeup of the board, given that the health of any nonprofit arts institution depends in large measure on the engagement and financial generosity of its trustees. ​​Biesenbach brought five trustees with him to the museum and then added five more during his tenure. (Four of his recruits have since left.) Burton recently added one trustee and, the museum said, has others in the pipeline.

This would not be an easy transition even in the best of times. Burton, like other museum administrators across the country, is confronting a drastically shifting landscape after the past two years, as institutions try to address concerns about diversity and representation in a museum world that was often seen — in its exhibitions, staff and boards — as dominated by white men.

Last year Mia Locks, MOCA’s senior curator and head of new initiatives, resigned after less than two years on the job, saying in a parting email to the staff, that MOCA’s leadership was not ready to “fully embrace” inclusion, diversity, equity and accessibility.

And in 2018, the artist Mark Grotjahn, who then served on MOCA’s board, declined to be honored at the museum’s gala, citing a lack of diversity of recent honorees.

Burton said equity is a clear priority that “has to be even clearer.” She added that she is grappling with how MOCA’s collection can “tell the narrative differently” and, given glaring omissions, “Do we look back and fill in?”

MOCA is competing for attention, art donations and funding in a museum scene that is thriving. There are lines of people every day waiting outside the Broad across the street and at the new Academy Museum of Motion Pictures across town. LACMA is constructing a new $650 million complex, and the Hammer is also expanding.

Those construction programs have highlighted the architectural deficiencies of MOCA’s main building. The entrance to the galleries is down a set of steps and largely out of sight, an uninviting contrast with the attention-getting architecture of some its Grand Avenue neighbors, which include the new Broad and Walt Disney Concert Hall.

Art world denizens have periodically questioned whether MOCA remains necessary, or whether it should be merged into LACMA or the Broad. But MOCA has one of the most respected postwar art collections in the world, and a strong history with artists. And these days, the institution says it is in fiscal health, with a balanced annual operating budget of about $22 million and an endowment of more than $180 million.

“MOCA in its heyday became the premier institution in the whole U.S. for thematic, contemporary shows,” said Deitch, a gallery owner who served for three tumultuous years as the museum’s director before leaving. “It was a class by itself.”

Ann Philbin, the director of the Hammer, said despite the challenges, this was “a great moment” for MOCA.

“It has a healthy endowment, it has an extraordinary collection,” she said. “And it now has a highly capable leader. They need to give her time and they need to trust her and let her lead.”

Burton, for her part, maintained that MOCA still has a critical role to play.

“I’ve never seen art museums feel as pertinent to the larger landscape as they do now,” she said. “At the same time, I hear people maybe more than ever talk about how they’re not accessible to them. And I find that to be this really interesting paradox that I think MOCA can actually address.”