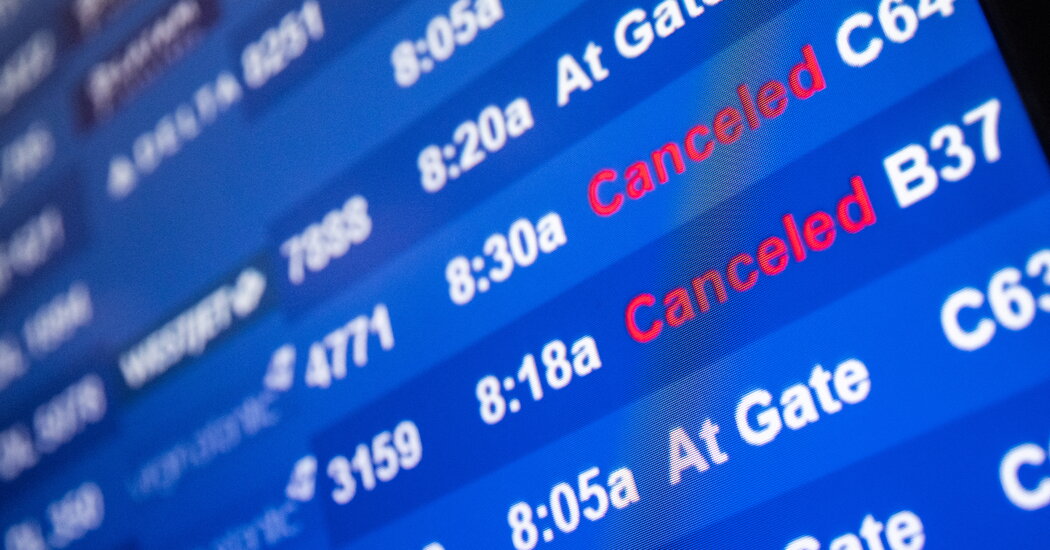 Over 1,000 flights in the United States, and thousands more globally, were canceled Sunday as the Omicron variant of the coronavirus sidelined crews during one of the year’s busiest weekends for travel.

As of Sunday evening, more than 1,300 flights with at least one stop in the United States, and over two times as many around the world, had been canceled, according to FlightAware, which provides aviation data.

Sunday’s bleak track record followed thousands of global flight cancellations on Christmas Eve and Christmas Day. The cancellations threatened to disrupt travel plans at a time when many fly to spend the Christmas holiday with their families. In the United States, the tradition appeared to rebound this year: Roughly two million people passed through screening checkpoints each day last week, according to the Transportation Security Administration, and the numbers on Christmas Eve and Christmas Day were nearly double the equivalent figures last year.

JetBlue, said Derek Dombrowski, a JetBlue spokesman, entered the holiday season with its highest staffing levels since the onset of the pandemic but, he added, the airline has “seen an increasing number of sick calls from Omicron.”

A spokeswoman said Sunday afternoon that Delta anticipated canceling roughly 200 flights along with another 40 on Monday. Earlier this weekend, Delta attributed the spate of cancellations to “winter weather” and “the Omicron variant.”

A spokesman for American Airlines referred an inquiry to FlightAware, which reported 83 cancellations Sunday.

Southwest Airlines canceled just 68 flights, or 1 percent. The cancellations were caused entirely by weather, said Dan Landson, a Southwest spokesman. “We haven’t had any operational issues related to Covid,” he said in an email. Along with United, Delta and American, Southwest is one of the four largest U.S. carriers.

As the Omicron variant spreads rapidly, the United States is experiencing a sharp rise in Covid cases. Its daily average on Christmas of roughly 201,000 daily cases, according to The New York Times’s coronavirus tracker, exceeds the average case load during this summer’s peak, which was driven by the Delta variant.

An airline trade group has asked the Centers for Disease Control and Prevention to shorten the recommended isolation period for fully vaccinated employees who test positive to a maximum of five days from 10 days before they can return with a negative test.

“Swift and safe adjustments by the C.D.C. would alleviate at least some of the staffing pressures and set up airlines to help millions of travelers returning from their holidays,” said Mr. Dombrowski, of JetBlue. The flight attendants’ union, however, has urged that reductions in recommended isolation times should be decided on “by public health professionals, not airlines.”