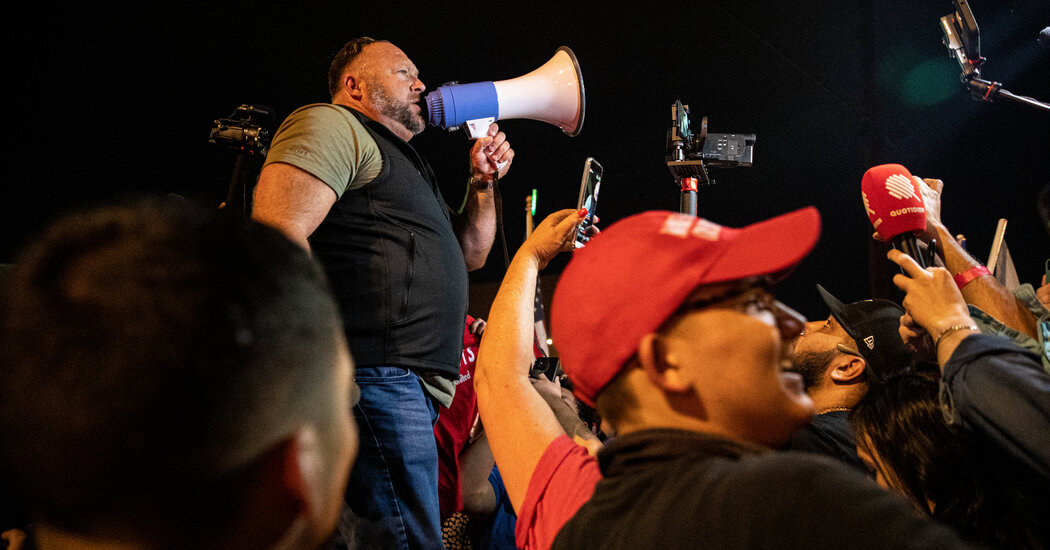 WASHINGTON — A state court in Connecticut granted a sweeping victory to the families of eight people killed in a 2012 mass shooting at Sandy Hook Elementary School in Newtown, Conn., who had sued the far-right broadcaster and conspiracy theorist Alex Jones and his Infowars media outlet for defamation.

The judge ruled on Monday that because Mr. Jones had refused to turn over documents ordered by the courts, including financial records, he was liable by default. The decision, combined with previous rulings in Texas in late September, means Mr. Jones has lost all the defamation lawsuits filed against him by the families of 10 victims.

Lawyers for Mr. Jones said he would appeal.

Mr. Jones for years spread bogus theories that the shooting that killed 20 first graders and six educators was part of a government-led plot to confiscate Americans’ firearms and that the victims’ families were “actors” in the scheme. People who believed those false claims accosted the families on the street and at events honoring their slain loved ones, abused them online, contacted them at their homes and threatened their lives.

The parents of Noah Pozner, the youngest Sandy Hook victim, whose parents were the first to sue Mr. Jones, have moved nearly 10 times since the shooting, and live in hiding.

“I would love to go see my son’s grave and I don’t get to do that,” Noah’s mother, Veronique De La Rosa, said in an interview after the cases were filed in 2018. Each time the family moved, conspiracists published their new home address “with the speed of light,” she said.

The Sandy Hook families maintain that Mr. Jones profited from spreading lies about their relatives’ murders. Mr. Jones has disputed that, while for years failing to produce sufficient records to bolster his claims.

Juries in Connecticut and Texas will next decide how much Mr. Jones should pay the families in damages, in addition to court costs. Those trials are scheduled for next year in both states.

The Connecticut case was brought by the families of eight Sandy Hook victims and an F.B.I. agent who responded to the shooting and was falsely portrayed as a participant in the “hoax.” The lawsuits in Texas were filed by the parents of Noah Pozner and Jesse Lewis.

Mr. Jones broadcasts conspiracy-themed content on the radio and online while selling diet supplements, survival gear and other merchandise. He began spreading false claims about the shooting shortly after it occurred on Dec. 14, 2012, including that it was a “false flag” staged by the Obama administration to justify taking away Americans’ guns. An ally of former President Donald J. Trump, Mr. Jones also advances vaccine misinformation on his Infowars show, as well as lies about 2020 election fraud.

Mr. Jones responded to the Connecticut ruling during his show on Monday. “We need to defend all of our speech rights to say whatever it is we wish. That’s the First Amendment,” he said.

Although jury trials in Texas and Connecticut are set for next year, Mr. Jones then asserted that “these individuals again are not allowing me to have a jury trial because they know the things they said I supposedly did didn’t happen, and they know they didn’t have a case for damages.”

Chris Mattei, a lawyer for the families in Connecticut, responded that “if Mr. Jones’s conduct here were protected by the First Amendment, he would have had every opportunity to make that case. But he chose to be defaulted.”

“He deliberately chose to prevent us from collecting evidence that would prove how his business works and why he engaged in this extended campaign against the families, and the relationship between that and his profitability.”

The rulings all came in response to Mr. Jones’s repeated failure to produce documents ordered by the courts in the run-up to trial, including financial records that would shed light on his business operation, and analytics that could show how his claims about Sandy Hook affected traffic to his Infowars website and online store.

The Texas and Connecticut lawsuits were filed in mid-2018, and have been accompanied ever since by unusual maneuvering from Mr. Jones’s legal team. In recent weeks, Mr. Jones’s lawyers sought to depose former Secretary of State Hillary Clinton in an apparent effort to bolster Mr. Jones’ theories that Mrs. Clinton played some role in the lawsuits.

Who is Alex Jones?

A conspiracy theorist. Mr. Jones, who founded the website Infowars in 1999, has spread conspiracy theories and misinformation for years, including false claims that the 2012 shooting at Sandy Hook Elementary School was a hoax.

A far-right broadcaster and pitchman. Mr. Jones built a substantial following by appealing to conspiracy-minded, largely white, male listeners via his website and radio show, where he amassed a fortune by hawking diet supplements and survivalist gear.

A Trump ally. Mr. Jones was an early supporter of Donald Trump, who has adopted many of Mr. Jones’s conspiracy theories. Mr. Jones also has echoed the former president’s false claims about the pandemic and the 2020 election.

Held liable for defamation. In four lawsuits brought by the families of 10 Sandy Hook shooting victims, judges found that because Mr. Jones refused to turn over documents ordered by the courts, including financial records, he lost the cases by default.

Barbara N. Bellis, the Connecticut Superior Court judge who ruled against Mr. Jones on Monday, criticized the effort to depose Mrs. Clinton because the motion was filed publicly and included details from a sealed deposition by a victim’s relative.

Mr. Jones has been sanctioned before by Judge Bellis, including after he went on his show with his attorney, Norm Pattis, at his side and offered $1 million for the head of Mr. Mattei, the Connecticut families’ lawyer, “on a pike.”

In a decision in Texas last month, Travis County District Court Judge Maya Guerra Gamble ruled that Mr. Jones and his legal team exercised “flagrant bad faith and callous disregard for the responsibilities of discovery under the rules.” In more than three years of litigation, Mr. Jones and his lawyers had similarly failed to produce documents and take other actions ordered by the court.

Mr. Jones said in a Texas deposition that Sandy Hook was “one-tenth of one percent of what I cover,” and that making his claims about the shooting had cost him audience share. But he failed to provide proof of that assertion.

“We always knew we’d beat Jones, but even we couldn’t predict that it would happen in such a ridiculous fashion,’’ said Mark Bankston, who represents the Sandy Hook families suing Mr. Jones in Texas. “I have never in my career seen such a dumb farce play out in a courtroom.’’

In Texas, Infowars accumulated more than $100,000 in sanctions from the court, including for ignoring orders to produce documents. Mr. Jones and his staff also failed to show up for scheduled depositions, lawyers for the families said.