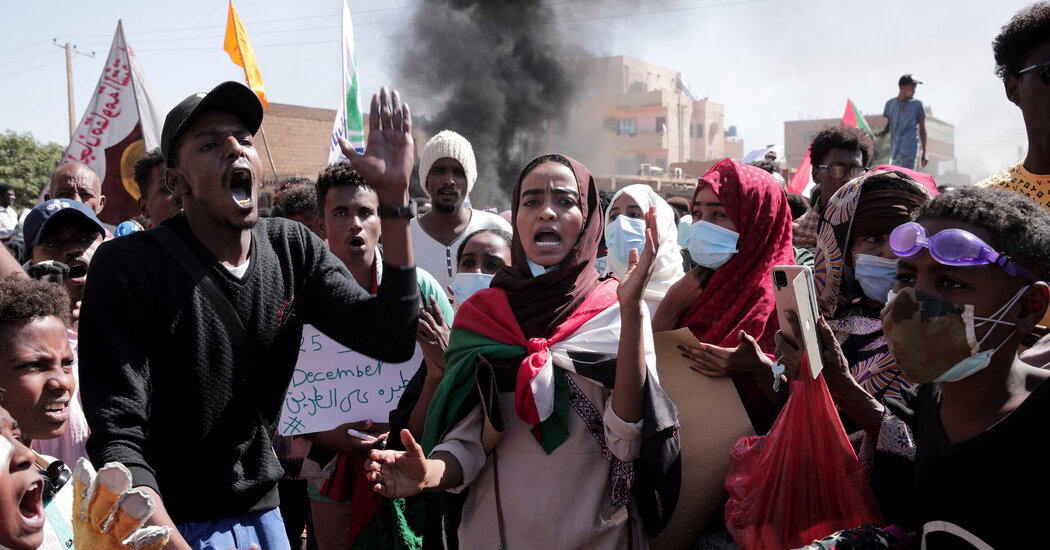 NAIROBI, Kenya — Thousands of protesters flooded the streets of several cities in Sudan on Saturday, activists and pro-democracy groups said, denouncing the October military coup that imperiled the nation’s fragile steps toward stability and its attempt at a democratic transition after decades of military rule.

The protests on Saturday were the 10th major demonstrations in the last two months, as coup opponents have remained defiant despite a continued crackdown from security forces, repeatedly pouring into the streets week after week to demand a return to civilian rule.

Anticipating Saturday’s protests, the authorities cut mobile internet starting from 6 a.m. local time, according to the internet monitoring organization NetBlocks. They also obstructed major roads in the capital, Khartoum, and closed bridges linking it to the neighboring city of Omdurman across the Nile River.

As the protests got underway, television channels carried footage of security forces firing volleys of tear gas against protesters who were trying to march to the presidential palace.

There were no deaths reported as of Saturday evening, but the pro-democracy Central Committee of Sudan Doctors said the authorities were preventing ambulances and medical aid personnel from assisting protesters.

But at least 48 people have been killed since the coup began, the doctors’ group has said, with hundreds of people in cities and towns across the nation injured.

“All these measures confirm the intentions of the putschists to confront the processions with more violence and brutality and for violations not to be documented,” the group said in a statement posted Saturday on Facebook.

The doctors’ group also accused the police of going into a hospital in the eastern city of Port Sudan and arresting an injured protester and a number of medical officers who tried to stop them.

On Saturday evening, the Sudanese Professionals Association, a pro-democracy coalition of trade unions, accused security forces of using “excessive force and reckless violence” and randomly detaining civilians. In a statement posted on Facebook, it called on lawyers to go to detention centers and police stations to help release those detained.

Since the coup, Sudan has been gripped by widespread and nearly continuous protests denouncing the Oct. 25 military coup along with the Nov. 21 deal with the military that reinstated Prime Minister Abdalla Hamdok to power.

Mr. Hamdok returned to the prime minister’s office in late November following four weeks of house arrest, but only after he signed a new power-sharing agreement with the military leaders who had deposed him.

“We must put an end to the bloodshed,” Mr. Hamdok declared at the time.

But if the country’s military, led by Lt. Gen. Abdel Fattah al-Burhan, thought simply bringing back Mr. Hamdok would calm the dissent, they appear to have miscalculated. The prime minister has been criticized by protesters and civilian members of his former cabinet alike for signing the agreement, and has been accused of giving cover to continued military rule.

Many remained incensed by the deaths of protesters who challenged the regime after the coup.

After anti-coup protests on Dec. 19, the United Nations human rights office called for an independent investigation into “disturbing” reports that 13 women and girls were victims of rape and gang rape. Demonstrators had gathered on that day to also mark the third anniversary of protests that led to the overthrow of the country’s longtime dictator, Omar Hassan al-Bashir, in April 2019.

“It is crucial that security forces guarantee and protect the right to peaceful assembly and act with full respect for international laws and standards regulating the use of force,” the U.N. human rights office said in a statement.

Saturday’s protests came just days after Mr. Hamdok had signaled to political figures that he intended to resign from his post, according to an official in his office.

Mr. Hamdok has expressed frustration that many political parties and the general public continue to reject the agreement he signed with the military. But he faces both local and international pressure to stay on.

“He is under so much pressure to make things work,” said the official, who was not allowed to discuss the matter publicly and so spoke on the condition of anonymity. “But anything could come up next.”