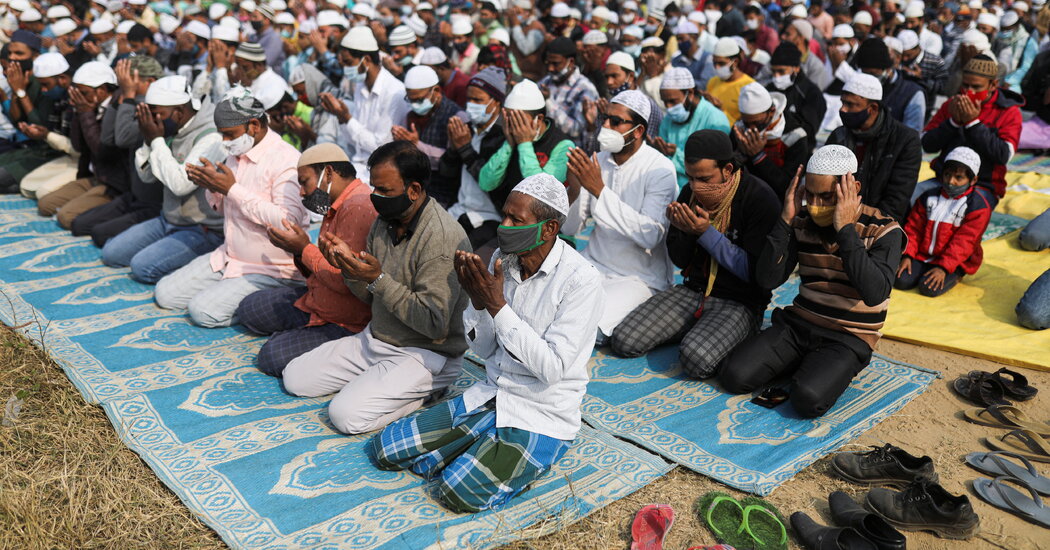 Hundreds of right-wing Hindu activists and monks rose in unison at a conference this week to take an oath: They would turn India, constitutionally a secular republic, into a Hindu nation, even if doing so required dying and killing.

“If 100 of us are ready to kill two million of them, then we will win and make India a Hindu nation,” said Pooja Shakun Pandey, a leader of Hindu Mahasabha, a group that espouses militant Hindu nationalism, referring to the country’s Muslims. “Be ready to kill and go to jail.”

Even by the standards of the rising anti-Muslim fury in India, the three-day conference in the city of Haridwar, 150 miles north of New Delhi, produced the most blatant and alarming call for violence in recent years.

The crowded auditorium, where right-wing Hindu monks called for other Hindus to arm themselves and kill Muslims, included influential religious leaders with close ties to Prime Minister Narendra Modi’s governing party, and even some members of the party.

Videos of the event have spread widely on social media in India this week. Yet Mr. Modi has maintained a characteristic silence that analysts say can be interpreted by his most extreme supporters as a tacit signal of protection.

The police, who readily jail rights activists and comedians on charges lacking evidence, have been slow to take action. Even opposition political groups have been restrained in their response, an indication of the degree to which right-wing Hindu nationalism has gripped the country since Mr. Modi came to office in 2014.

The inflammatory remarks come as some states governed by Mr. Modi’s Bharatiya Janata Party, or B.J.P., are holding elections, including in Uttar Pradesh and Uttarakhand, where the conference was held. Mr. Modi was busy campaigning this week in Uttar Pradesh for Yogi Adityanath, his hard-line protégé and the state’s chief minister, who has frequently fanned anti-Muslim hatred.

Multiple episodes of violence against Muslims have been reported during election season, including attacks by mobs trying to close businesses owned by Muslims.

“There are virtually only a handful of political leaders left who even mention the need to preserve India’s secularism,” said Gilles Verniers, a professor of political science at Ashoka University near New Delhi. “The B.J.P. may face increasing political challenges, but it has won its cultural war, with lasting effects on India’s democracy, and on India’s largest minority.”

Right-wing Hindu nationalists have preached violence online for years, but the violence has recently spilled onto the streets. Muslim fruit sellers have been beaten and their earnings snatched away after being accused of luring Hindu women into marriage to convert them. Muslim activists have been threatened with prosecution under an antiterrorism law that has been scrutinized by courts.

“We are fast losing everything in this country, including the right to worship,” said Niyaz Farooqi, a Muslim who works in an automobile showroom in Gurugram. “A right given to us by the Constitution of this country.”

On Friday, four days after the conference ended, and after the videos circulated widely, the police in Uttarakhand announced that they had opened an investigation but that no arrests had been made. Officials said they have registered a case against organizers of the conference for promoting “enmity between different groups on grounds of religion,” which can mean a jail term of five years.

“We will do the investigation as per law and such types of incidents will not be tolerated,” said Ashok Kumar, a top police officer in the state of Uttarakhand.

During the conference, Swami Prabodhanand Giri, head of a right-wing Hindu organization in Uttarakhand, said the country now belongs to Hindus.

“This is why, like in Myanmar, the police here, the politicians here, the army and every Hindu must pick up weapons, and we will have to conduct this cleanliness drive,” he said while referring to Muslims. “There is no solution apart from this.”

Mr. Prabodhanand’s aides declined to comment for this article.

Videos from the conference also showed Suresh Chavhanke, who heads a news channel, administering an oath to turn India into a Hindu-first country.

“We make a resolution until our last breath: We will make India a Hindu nation, and keep it a Hindu-only nation,” he said. “We will fight and die if required, we will kill as well.” He then tweeted a video of the oath to his half a million followers.

Political observers say the government is allowing hate speech of this kind by remaining silent in the face of calls for violence, a silence underscored by the meekness of the political opposition.

Nilanjan Mukhopadhyay, a biographer of Mr. Modi who has written extensively on the rise of the Hindu right, said the B.J.P.’s earlier leaders thought they could use Hindu nationalism to mobilize constituencies but then contain the ideology. That calculation backfired in 1992, when Hindu activists demolished a major mosque.

Many earlier B.J.P. leaders expressed regrets about the episode, but Mr. Modi has no such qualms, Mr. Mukhopadhyay said at a recent book event.