At Summit, U.S., Canada and Mexico Will Address Migration 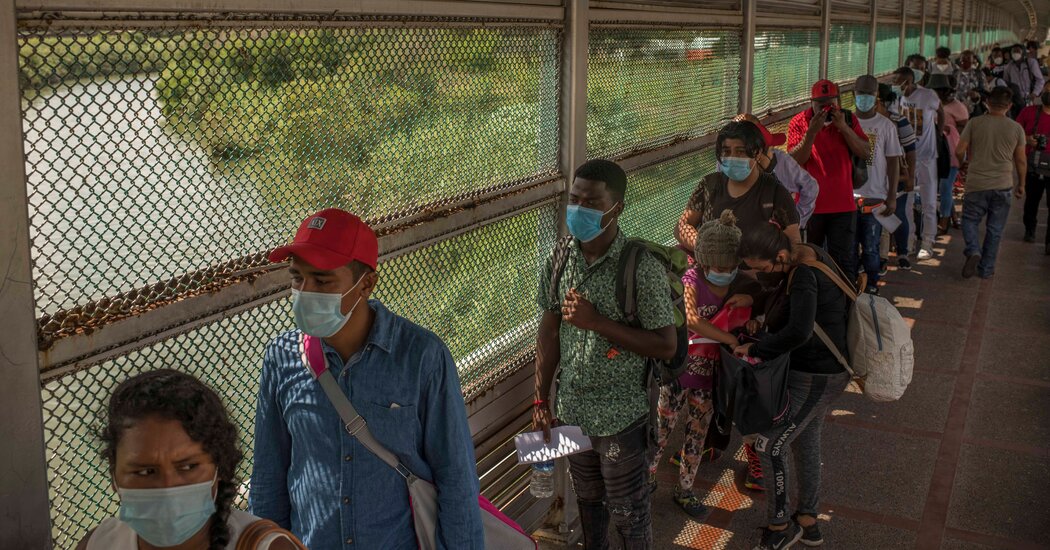 WASHINGTON — President Biden will host Prime Minister Justin Trudeau of Canada and President Andrés Manuel López Obrador of Mexico at the White House on Thursday, a diplomatic mission that seeks to find accord amid trade scuffles, accusations of American protectionism and ongoing concerns over a surge of migration toward the U.S.-Mexico border.

The return of the summit after a five-year hiatus during the Trump administration signals an increased appetite among North American leaders to show a sense of strategic and economic solidarity amid a rise in competition from Asia and Europe.

The gathering also comes at a critical moment for the United States, as the breakdown in global supply chains and the mass movement of people across the Americas has made cooperation with Mexico and Canada more vital than ever.

Three senior administration officials said Wednesday that the leaders would discuss creating more humane pathways to asylum or job creation for migrants displaced by climate change or human trafficking, but would not discuss policies that have become flash points for immigration activists, including a program that forces some asylum seekers to wait in Mexico while their cases are pending.

When asked how the problem of migration could be discussed without mentioning those programs, an administration official said they could not discuss pending court cases.

The officials spoke anonymously to reporters in order to outline details of the summit.

“At the end of the day, getting back together will give the right impression,” said Tony Payan, director of the Mexico Center at Rice University’s Baker Institute for Public Policy. “The bad news is that the issues are many and thorny.”

No accords are expected over ongoing disagreements over how each country has handled its trade commitments. Since Mr. Biden took office, the particulars of that Trump-era revision of the North American Free Trade Agreement, called the United States Mexico Canada Agreement, have been in dispute. The accord sought to update Mexico’s labor laws, encourage more auto production in North America, and open Canadian markets for American dairy farmers.

In recent weeks, the Canadian government has argued that the tax credit offered to American consumers who buy American-made electric vehicles is in breach of the accord. Speaking to reporters in a news conference on Monday, Mr. Trudeau said that the Biden administration’s buy-American ethos was “counterproductive” to promoting commerce between the two countries.

“It’s an issue that I’ve already underlined very often with President Biden and it will certainly be part of important conversations that we’ll have later this week,” Mr. Trudeau said.

For its part, the Biden administration has accused the Canadian government of practices that favor Canadian dairy farmers and raised concerns that Mexico’s energy policies give an unfair advantage to state-owned companies. Administration officials said on Wednesday that Mr. Biden planned to reaffirm U.S.M.C.A. provisions in support of labor rights protection, a reference to a dispute settled against Mexico earlier this year.

Officials expect agreements to be reached over vaccine sharing. Leaders in Canada and Mexico will agree to share “millions” of doses with poorer countries in Latin America and the Caribbean, an official said. The three countries will sign onto a pact to reduce methane emissions in the oil and gas industries by as much as 75 percent by 2030, and form a working group to address supply chain issues.

The more delicate discussions will come with Mr. López Obrador. Mexico, long an underdog in the relationship with its neighbors, has earned considerable leverage in a year that saw a wave of pandemic-fueled migration from Latin America. Mr. Biden has had to rely ever more on Mexico to keep the flow of people from overwhelming the southwestern border, and to house tens of thousands of migrants who might otherwise head north.

For Biden officials, the importance of maintaining strong Mexican enforcement was made clear in September, when thousands of Haitians walked across the border to Texas.

Mr. Biden’s dependence on Mexico has put the fate of a key piece of his domestic agenda in the hands of Mr. López Obrador, who has lashed out at the United States and pursed policies that run counter to American interests.

Mr. López Obrador’s government has sought to jail university professors, gutted funding for civic organizations, attacked journalists by name at national news conferences and championed a constitutional reform that would ensure the dominance of the state-owned electricity giant in Mexico’s energy market.

“They view Mexico as critically important to a number of their high profile goals, the largest of which of course is immigration,” said Roberta S. Jacobson, who previously served as the ambassador to Mexico and spent four months as Mr. Biden’s border coordinator. “But I think they equally view Mexico as, at best, an extremely complicated partner and at worst an unreliable one on the number of things they care about.”

While the Mexican leader lavished praise on President Donald J. Trump for not interfering in Mexican affairs, he has taken a more openly confrontational stance toward U.S. policies since Mr. Biden took office.

Just this week, Mr. López Obrador skewered the American embargo on Cuba as “vile” and attacked the Biden administration for helping to fund Mexican media groups that he described as “opposition publications.” (The president previously said that American financing for Mexican civil society amounts to “promoting a coup mentality.”)

Vice President Kamala Harris met with Mr. López Obrador during her trip to Mexico over the summer and has since been seen as an internal keeper of that relationship. Mr. López Obrador will meet with her on Thursday morning before he has a bilateral meeting with Mr. Biden.

Ken Salazar, the ambassador to Mexico, has publicly expressed “serious concerns” about the energy reform designed to boost the state-controlled electricity company over private firms. But the administration has stayed mostly quiet on Mr. López Obrador’s provocations, and Mr. Salazar steered clear of offering an assessment of the Mexican president’s treatment of civil society and the media in a September interview with the Times.

“Freedom of the press is very valued by President Biden,” Mr. Salazar said. “I’m sure we’ll have conversations on some of these issues.”

Mr. López Obrador, for his part, has seized the opportunity to assertively pursue his own agenda, particularly on security issues.

For months, the Mexican government delayed granting visas to several agents from the Drug Enforcement Administration who had been waiting for permission to work in the country, according to officials in the two countries.

The delay was partly a response to the arrest of Mexico’s former defense minister in a Los Angeles airport on charges of drug trafficking at the end of Mr. Trump’s term last year, the officials said, a move that prompted outrage at the highest levels of the Mexican government.

During discussions over security cooperation after Mr. Biden took office, Mexico asked that the United States allow Mexican security agents into the country to work with local law enforcement officials on efforts to combat the trafficking of American weapons south of the border.

The Biden administration agreed to that proposal, and in the coming weeks, officials expect that the D.E.A. agents will be let into Mexico and the Mexican officials will go to the United States.

Roberto Velasco, the Mexican Foreign Ministry’s chief officer for North America, said in an interview that the move was part of Mr. López Obrador’s focus on “a vision of security cooperation that was reciprocal and took into account the priorities of both countries.”