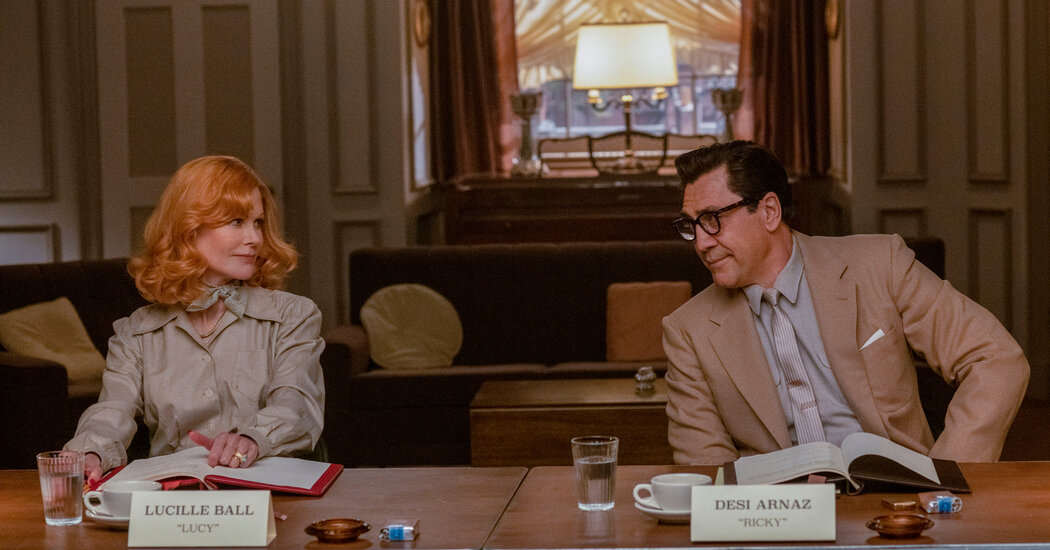 “I’m not funny,” Lucille Ball once said (LOL). “What I am is brave.” It was performative modesty of the kind that celebrities excel at. And it was true. You get the tiniest peek at how brave she could be in “Being the Ricardos,” Aaron Sorkin’s very soft look at a very bad week that Ball and her husband, Desi Arnaz, had while starring in their show “I Love Lucy.” She was America’s favorite redhead, he was her glamorous bandleader husband, and they were adored by millions. But not everyone loved Lucy.

A lively, chatty, somewhat odd and insistently depoliticized biopic, “Being the Ricardos” reimagines what happened in 1953 after the powerful gossipmonger Walter Winchell dropped a not-so blind item about Ball into his radio broadcast: “The most popular of all television stars was confronted with her membership in the Communist Party.” Joe McCarthy was hunting supposed communists and the Hollywood blacklist was in full effect; Winchell’s item was potentially career killing and life destroying. But when a publicist told Ball that Winchell was probably talking about another big TV comic, Ball joked that she resented the implication. “Everyone knows that I’m the top comedian!”

Sorkin jumps into the fray with Lucy (a tart Nicole Kidman) and Desi (an affable Javier Bardem), who come off like nastier, edgier versions of their TV alter egos. “Lucy, I’m home,” Desi announces right at the start at their real house. “Where the hell have you been, you Cuban dimwit?” she bellows. A minute later, they are pawing at each other, instigating a push and pull that continues throughout. Sorkin tends to overstate and here overplays these introductions, cranking the volume to shrill. He also coyly obscures the pair’s faces for a few beats, showing their images reflected on a glassy pane, a nod to their blurred on- and offscreen lives.

With the Winchell item as a jumping off point, Sorkin then tracks how Lucy and Desi navigated this crisis, their hit show and their strained marriage. (Mostly, it is Lucy who winds them up, needling Desi about his real or imagined indiscretions.) Shortly after Winchell plants the juicy item in his radio broadcast, Lucy and Desi breeze into the workweek at Desilu Productions, steeled with their million-dollar smiles and a vague plan. Taking a wait-and-see approach, they steady themselves for the blowback and calm the skittish executives, crew and cast — Nina Arianda makes a terrific, beleaguered Ethel to J.K. Simmons’s sourpuss Fred — as the gang hashes out the next episode.

The movie has a ticking-bomb structure with Monday’s table read giving way to Tuesday’s blocking and so on. As the days slip by, the characters fret and scheme, and Sorkin folds in black-and-white recreations from “I Love Lucy” — in a nice touch, Lucy can see in her head how a scene will play — as well as flashbacks that trace the arc of Lucy and Desi’s relationship. Less productively, Sorkin weaves in fake documentary-style testimonials from people who worked on the series, including the showrunner and writers. The movie is awfully busy. Even so, the countdown creates tension and makes a sturdy through line on which Sorkin can hang the many moving parts.

Some of the predictable liberties that Sorkin has taken in adapting fact to fiction are instructive. In his biggest move, he has shifted the timing of Lucy’s second pregnancy so that she and Desi announce it to shocked collaborators and executives not long after the Winchell item lands. The real pregnancy became national news the year before because Ball and Arnaz’s television counterparts were turned into expectant parents, too. It was radical, a scandal — “You can’t have a pregnant woman on television,” a bewildered suit in the movie says — and proved a ratings coup. More people apparently tuned into the birth of the Ricardos’ baby in January 1953 than watched Eisenhower’s inauguration.

Aligning the timing of the pregnancy with the Winchell debacle certainly adds more comedy and drama. I imagine that Sorkin believes it softens the characters, specifically Lucy, making her seem less strident, more appealing, more feminine. Because whatever you may have read or heard about Ball, it’s still strange to watch the fictional version lob expletives worthy of a barroom drunk or physically and verbally abuse her husband. That’s especially true if you’re familiar with “I Love Lucy”: One of the show’s complicated pleasures is how Lucy and Desi’s marriage — and the palpable love they beamed into homes — played out as a manifestly uneasy power struggle.

The year 1953 was a busy one for Arnaz and Ball. He had a hit song; she won an Emmy. In September, she also testified before the House Committee on Un-American Activities, which grilled her for registering to vote as a Communist Party member in 1936 (as did her mother and brother). Her appearance before the committee was kept secret, perhaps as a concession to her enormous popularity, and she said her registration was to appease her socialist grandfather. Whatever the truth — and it’s worth noting that Ball had gutsily stood up to McCarthyism in the not-too-distant past — her testimony was a master class in deflection. Here too, she played the dingbat brilliantly. When asked if she knew the phrase “criminal syndicalism,” Ball replied, “No, but it is pretty.”

The Lucy in “Being the Ricardos” is scarcely interested in messy politics. Mainly she plays the role of the jealous, suspicious wife and harridan star whom everyone really does love even if she’s a bitch. That shortchanges and flattens Ball, despite Kidman’s efforts. She and Bardem are both miscast, but Kidman is a particularly off fit for Ball, whose physical dexterity and ductile physiognomy, her rubber-band mouth and astonished eyes, are imprinted in our collective brain.

As if to compensate, Kidman and Sorkin have tried to re-create Ball’s signature looks with some unfortunate prosthetics and assorted other tweaks. Kidman’s cheeks have been widened and her brow altered but the net result is that she looks less like Ball and more like an uncanny valley Glenn Close.

Kidman and Bardem both seem to have been digitally de-aged to varying degrees throughout the movie, she more than he. (Whatever age, Bardem never resembles Arnaz, but does still look like himself.) These digital face-lifts look bad when projected, though are less disruptive when seen on a TV or computer screen, which is presumably how most viewers will watch the movie. The digital work also seems unnecessary. Kidman and Bardem are both older than their roles, if not dramatically. More to the point, they are appealing, skilled performers who can create deeply felt characters without props. Why not put them in costumes and ugly wigs and just let them, you know, act?

Being the Ricardos
Rated R for adult language. Running time: 2 hours 5 minutes. In theaters and on Amazon Prime.