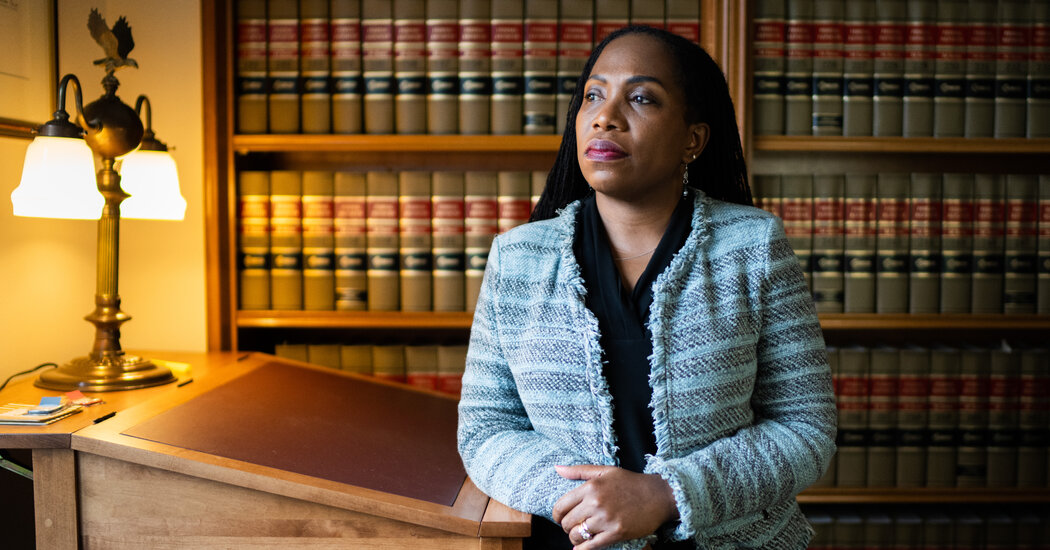 WASHINGTON — President Biden has interviewed at least three candidates for his Supreme Court nomination, a signal that he intends to fulfill his promise that he would choose a nominee by the end of the month.

But the end of the month is less than a week away. The interviews began late last week, according to several people familiar with the process, who spoke on condition of anonymity because of its political sensitivity. Mr. Biden is now under pressure to announce his selection, who he has promised will be a Black woman, somewhere between a rapidly devolving diplomatic effort to contain Russia’s aggression toward Ukraine and plans to deliver his first State of the Union address, scheduled for next Tuesday.

The White House emphasized on Tuesday that Mr. Biden had not made a decision but remained on track to make one before month’s end.

According to a person familiar with the process, Mr. Biden held interviews with three candidates who had long been seen as on his short list: He spoke with Judge Ketanji Brown Jackson, who won the support of three Republican senators when Mr. Biden elevated her to the U.S. Court of Appeals for the District of Columbia Circuit. He also interviewed Leondra R. Kruger of the California Supreme Court, a former law clerk on the Supreme Court whose Yale Law pedigree is shared by four of the current justices.

He also spoke with J. Michelle Childs, a Federal District Court judge in South Carolina, a state whose Black voters Mr. Biden has credited with helping him win the presidency.

At least one of the interviews was in person.

The White House, aware that a Supreme Court nomination is one of the most scrutinized and politically volatile of all presidential duties, has said so little about the process to replace the retiring Justice Stephen G. Breyer that the lack of details has become a running joke: “The long national process will soon be over,” Jen Psaki, the White House press secretary, said wryly when a reporter asked if Mr. Biden had finished interviewing.

The Washington Post and CNN had each reported some of the interviews earlier. Several of Mr. Biden’s advisers said he might have more interviews, and emphasized that he intended to be deliberate as he entered the final phase of assessing candidates. Several others also pointed out that Mr. Biden’s interest in a lengthy, detailed process could threaten his own self-imposed deadline.

“He’s not someone who lets outside forces dictate his timing,” said Jeff Peck, a lobbyist who served as general counsel and staff director to the Senate Judiciary Committee when Mr. Biden was chairman of it. “He will do it when he is ready and when he has decided, but I do think there’s an outside bookend here, in part because of the State of the Union.”

In the past few weeks, Mr. Biden has stayed up late reading court decisions. As chairman of the Judiciary Committee, Mr. Biden presided over the hearings of several Supreme Court nominees. He has said one of his proudest moments in that role was when he helped thwart the nomination of Robert H. Bork, because of what he considered Mr. Bork’s restrictive views on civil rights, women’s rights and the Constitution.

In 1991, he presided over explosive hearings to confirm Justice Clarence Thomas. Those hearings featured sexual misconduct charges that left some accusing Mr. Biden and his all-white, all-male committee of having mistreated Anita Hill, who had accused Justice Thomas of sexual harassment. Mr. Biden has since expressed regret to Ms. Hill.

As a senator, Mr. Biden would often emphatically or emotionally question nominees on issues such as civil rights and the right to privacy.

“Just talk to me as a father,” he asked John G. Roberts Jr. during a Senate confirmation hearing in 2005, seeking to understand how Mr. Roberts felt about end-of-life planning. “Just tell me, just philosophically, what do you think?” (Mr. Roberts, now the chief justice, declined to answer the question on those terms.)

Mr. Peck said Mr. Biden was most likely using that same method during interviews, with an ear for what senators would be looking to hear during a confirmation hearing.

“I’m sure the conversations include the kind of discussions that allow him to kind of gain a bit of insight into a potential nominee’s value system,” he said. “He’s going to want someone who can forge consensus, who can write powerful majority opinions and can also express dissenting views in a clear way that people can understand.”

Who Are Some of the Contenders for the Supreme Court?

Leondra R. Kruger. The California Supreme Court justice has many of the qualifications typical of nominees for the U.S. Supreme Court, but she is anomalous in at least one way: She serves on a state court. Justice Kruger’s moderation could make her a mediating force in Washington.

In the White House, Mr. Biden is surrounded by people who understand the workings of the court, including his chief of staff, Ron Klain. He was Mr. Biden’s counsel on the Judiciary Committee during the 1991 showdown over the nomination of Justice Thomas, and he was a top court adviser to Presidents Bill Clinton and Barack Obama. Dana Remus, the White House counsel, formerly clerked for Justice Samuel A. Alito Jr., a member of the court’s conservative wing.

Among his other advisers on the matter are Cedric Richmond, the director of the White House Office of Public Engagement, and Kamala Harris, the vice president, though she was out of the country when interviews began.

Mr. Biden and his advisers are relying on Doug Jones, a former Alabama senator who will help the eventual nominee navigate the Senate. Mr. Jones began placing phone calls to lawmakers on Capitol Hill last week. Senator Charles E. Grassley of Iowa, the top Republican on the Judiciary Committee, was one of the first people to receive a call from what a senior White House official said was a “call list” of former colleagues to get their insight and advice.

In that discussion, according to a person who was briefed on it, Mr. Grassley told Mr. Jones that he was concerned the White House might only offer Zoom meetings with the nominee, and wanted assurance that any senator who wanted an in-person interview with the nominee could have one.

Michael Gerhardt, a law professor at the University of North Carolina at Chapel Hill and former special counsel to the Judiciary Committee, praised the team around the president, but said Mr. Biden risked a “political cost” by taking his time to choose someone as the situation in Ukraine unfolded.