Biden’s Stand on Ukraine Is a Wider Test of U.S. Credibility Abroad 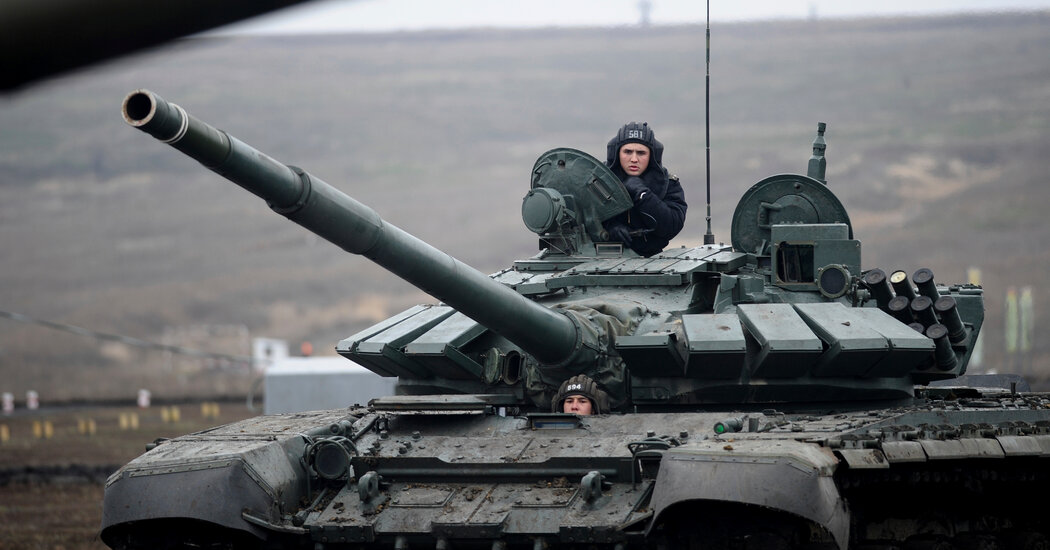 WASHINGTON — The American president had issued a stern warning to Russia’s leader, Vladimir V. Putin: Keep your troops out of Ukraine, or face harsh economic reprisals.

That was March 2014. More than seven years later, President Biden is now the one threatening Mr. Putin with “severe consequences” should Russia send some of the tens of thousands of troops it has massed along Ukraine’s eastern border into the country.

Mr. Biden hopes to have more influence over Mr. Putin through an explicit threat to take more punishing economic action than Mr. Obama did after the annexation of Crimea, and Mr. Putin’s subsequent instigation of a separatist insurgency in eastern Ukraine that has since left as many as 13,000 people dead.

There is no guarantee that Mr. Putin will listen any more carefully this time, particularly given that Mr. Biden has ruled out direct U.S. military action. And the stakes are even higher: Another failure to deter Mr. Putin, Biden officials and their critics agree, would deal a severe blow to an international system of rules and borders that the administration has worked hard to reaffirm in the wake of President Donald J. Trump’s “America First” foreign policy, which raised questions about how far the United States would go to defend its allies and enforce its vision of international rules.

Secretary of State Antony J. Blinken made that point in a Dec. 12 appearance on NBC’s “Meet the Press,” arguing that the current crisis is about more than Ukraine’s sovereignty. Mr. Blinken said that “there is something even bigger at stake here, and it’s the basic rules of the road of the international system — rules that say that one country can’t change the borders of another by force.”

But Mr. Obama said much the same in 2014, warning “that in the 21st century, the borders of Europe cannot be redrawn with force, that international law matters.” Mr. Putin paid little attention to such talk when he seized Crimea and spoke passionately — as he does now about all of Ukraine — of the region’s historical ties to Russia.

Compounding the challenge for Mr. Biden is the possibility that Mr. Putin may perceive American weakness after Mr. Biden’s withdrawal from Afghanistan, which critics say signaled waning U.S. resolve overseas.

Richard Fontaine, the chief executive of the nonpartisan Center for a New American Security, said the standoff amounted to a test of American credibility.

“If the United States says, ‘Don’t do this, you will regret it, there will be very serious costs,’ and the Russians do it anyway, it does raise questions about America’s ability to achieve outcomes, at least in the Russian immediate periphery,” he said.

To counter such dangers, members of Congress and former U.S. officials are urging Mr. Biden to bolster his economic threats by sending more military aid to Kyiv right away as a deterrent. At the same time, they are imploring him to resist any hint that he is accommodating the Russian leader in hopes of making the crisis quietly go away.

“Vladimir Putin has invaded two democratic neighbors in just over a decade. Letting him do it a third time would set the global system back decades,” said James R. Stavridis, a retired four-star Navy admiral who served as the supreme allied commander at NATO. “Appeasement does not work any better now than it worked for Neville Chamberlain in the late 1930s.”

Biden officials are clearly sensitive to such fears, particularly from Ukraine and other Eastern European nations. Those alarms were stoked the day after the American president’s two-hour call with Mr. Putin on Dec. 7. Mr. Biden told reporters that he wanted to “discuss the future of Russia’s concerns relative to NATO writ large, and whether or not we can work out any accommodations as it relates to bringing down the temperature along the eastern front.”

In a video posted on Twitter from Kyiv this week, Karen Donfried, the State Department’s assistant secretary for European and Eurasian affairs, confronted head-on the idea that Washington might meet Mr. Putin’s demands, which include legal guarantees that NATO will never station offensive weapons on Ukraine’s soil or admit the country into the military alliance.

“The notion that we would push Ukraine to make concessions in discussions and dialogue with Russia is pure disinformation and should be treated as such,” Ms. Donfried said. She was in Kyiv for meetings before heading on to Moscow.

In another video message from Moscow on Wednesday, Ms. Donfried said she had met there with Russian officials, including the deputy Russian foreign minister, Sergey A. Ryabkov, “to share Moscow’s proposals on European security.” Ms. Donfried said she would relay the ideas to Washington as well as to NATO allies during a stop in Brussels this week.

Some critics of the Afghanistan withdrawal also objected to Mr. Biden’s decision to waive some congressional sanctions against the Nord Stream 2 project, a natural gas pipeline from Russia to Germany.

“I strongly urge President Biden not to make concessions at the expense of our strategic partner Ukraine in response to the Putin regime’s provocative military buildup,” Representative Mike McCaul of Texas, the top Republican on the House Foreign Affairs Committee, said in a statement.

“This would not only fail to de-escalate tensions, it would also embolden Vladimir Putin and his fellow autocrats by demonstrating the United States will surrender in the face of saber-rattling,” Mr. McCaul added. “Particularly in the aftermath of the disastrous withdrawal from Afghanistan and the Nord Stream 2 capitulation, U.S. credibility from Kyiv to Taipei cannot withstand another blow of this nature.”

There is some evidence that Russia sees things this way. Days after the fall of Kabul in August, Nikolai Patrushev, the head of the Kremlin’s Security Council, told the Russian newspaper Izvestia that “a similar situation awaits those who are banking on America in Ukraine.”

“Did the fact that Afghanistan having the status of a main U.S. ally outside of NATO save the ousted pro-American regime in Kabul?” Mr. Patrushev asked.

And Maxim Samorukov, a fellow at the Carnegie Moscow Center, wrote in an analysis published last week that Mr. Putin had threatened Mr. Biden with “an especially humiliating rerun of recent events in Afghanistan.”

Afghanistan showed Mr. Biden’s desire “to scale back U.S. commitments in order to adapt his foreign policy to new global realities,” Mr. Samorukov said. “In the Kremlin’s view, it is now time for the United States to make a similar rational choice about Ukraine.”

Then there is China, which U.S. officials warn has been equipping and training for a possible invasion of Taiwan, which Beijing considers a rogue province, sometime in the coming years.

“China will be watching U.S. support to Ukraine, and it will inform their calculus regarding Taiwan,” Mr. Stavridis said. “All the more reason we need to support Ukraine with intelligence, cyber, defensive but lethal weapons, economic sanctions and — above all — alliance solidarity.”

But at least one prominent China expert doubts that Beijing will infer much from either the U.S. exit from Afghanistan or America’s response to Mr. Putin over Ukraine.