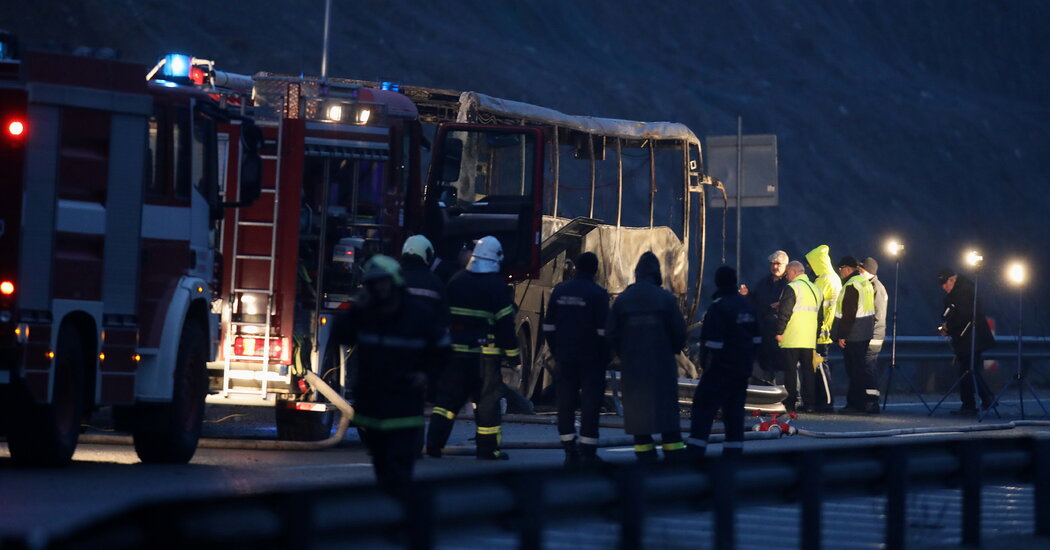 SOFIA, Bulgaria — At least 45 people died when a bus caught fire and crashed on a highway in western Bulgaria on Tuesday, officials said.

The bus had North Macedonian plates and was making a return trip from Turkey to Skopje, the capital of North Macedonia, according to the Bulgarian Interior Ministry.

Some people jumped through the vehicle’s windows to escape the flames, local news outlets reported, adding that the victims included the bus driver and a number of young children.

Boyko Rashkov, the Bulgarian interior minister, visited the site of the accident. “The picture is horrifying,” he told reporters, adding that the victims’ bodies had turned to ash. “I haven’t seen anything like this before.”

Nikolai Nikolov, the head of the fire safety department at the Bulgarian Interior Ministry, told BTV television that 52 people had been traveling on the bus when it crashed around 2 a.m. local time. BTV said that the accident had occurred on the Struma Motorway near the village of Bosnek, in western Bulgaria.

North Macedonia’s foreign minister, Bujar Osmani, told BTV that the bus had been returning with three others from a weekend trip to Istanbul.

Seven survivors with burns and lacerations, including a teenage girl, were taken to Pirogov Hospital in Sofia, Maya Argirova, head of the burn clinic there, told reporters.

“It is a terrible tragedy because many of them are children,” Mr. Zaev said of the victims, adding that he had spoken to one of the injured who had managed to break a window of the bus and help several people escape. “Unfortunately, the others were less fortunate,” he said.

The injured are in good condition and will be transported to Skopje when they have fully recovered, according to hospital officials.

Stefan Yanev, the acting prime minister of Bulgaria, also visited the site of the crash. “This news shook us,” he told reporters, adding that his government was working swiftly to investigate what had happened.

On Tuesday, the Bulgarian minister for foreign affairs, Svetlan Stoev, and his North Macedonian counterpart, Mr. Osmani, spoke by phone, according to a news release posted on the website of the Bulgarian Ministry of Foreign Affairs. Mr. Osmani was en route to Pirogov Hospital, where he would meet with Mr. Stoev, according to the release.

On Twitter, Mr. Stoev posted that Bulgaria would do everything to take care of the victims and to find the cause of the “tragedy.”

In 2018, a tourist bus carrying 33 pilgrims from a village north of the capital to a monastery crashed near Sofia, killing at least 16 people and injuring 26 others.