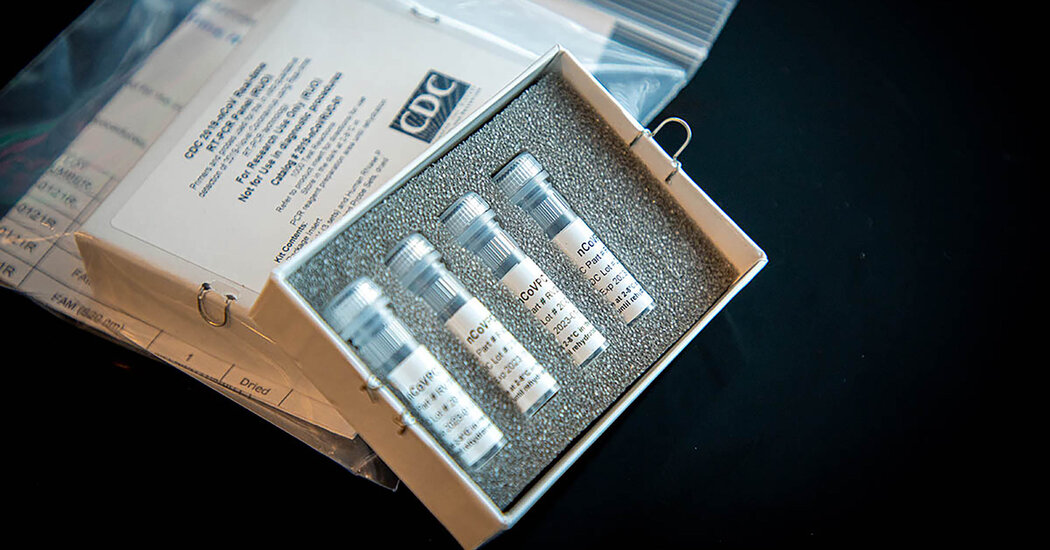 The faulty coronavirus testing kits developed by the Centers for Disease Control and Prevention in the early weeks of the pandemic were not only contaminated but had a basic design flaw, according to an internal review by the agency.

Health officials had already acknowledged that the test kits were contaminated, but the internal report, whose findings were published in PLOS ONE on Wednesday, also documented a design error that caused false positives.

The distribution of faulty test kits, at a time when no other tests were authorized, set back health officials’ efforts to detect and track the virus.

“It delayed the availability of more widespread testing,” said Dr. Benjamin Pinsky, the director of clinical virology for Stanford Health Care. He added, “I think it’s important that they got to the bottom of what went wrong.”

In January 2020, the C.D.C. developed a polymerase chain reaction, or P.C.R., test for the virus. P.C.R. tests, which are performed in laboratories, can detect the virus at very low levels and have been considered the gold standard for diagnosing a coronavirus infection.

Problems emerged soon after the C.D.C. had begun shipping its test kits out to public health laboratories in early February. Within days, many labs were reporting that the tests were generating inconclusive results.

In mid-February, the agency acknowledged that the kits were flawed, and in April, officials at the U.S. Food and Drug Administration said that poor manufacturing practices had resulted in contamination of the test kits.

The new paper presents the results of the C.D.C.’s own internal investigation into the problems with the tests.

The primers and probes need to be carefully designed so that they bind to the target sequences and not to each other. In this case, that did not happen. One of the probes in the kit sometimes bound to one of the primers, producing the fluorescent signal and generating a false positive.

“It’s something that should have been caught in the design phase,” said Susan Butler-Wu, a clinical microbiologist at the Keck School of Medicine of the University of Southern California. “That’s one thing that you check for.”

The contamination suggests that the agency violated standard manufacturing protocols, officials have said.

Pfizer’s Covid pill. A study of Pfizer’s oral Covid treatment confirmed that it helps stave off severe disease, even from the Omicron variant, the company announced. Pfizer said the treatment reduced the risk of hospitalization and death by 89 percent if given within three days of the onset of symptoms.

The problems may also have been a sign of an agency in a rush, experts said.

“I’m not entirely surprised that they ran into some glitches right out of the gate,” said Dr. Emily Volk, president of the College of American Pathologists, who also praised the agency for its transparency. “They were asked to ramp up production in a way that I’m not sure that they had ever been asked to before.”

The problems with the early tests prompted the C.D.C. to implement “a more comprehensive and rigorous review process” in developing a new test that can detect both the coronavirus and the flu, the authors reported. The new test was also piloted in three public health laboratories to ensure that it worked, they noted.

“Since the rollout of the initial Covid-19 test, C.D.C. has implemented corrective measures and remains dedicated to the highest quality laboratory science and safety,” the agency said in a statement.

The bigger lesson, Dr. Butler-Wu said, is that the responsibility for developing diagnostic tests should be distributed more widely during a public health emergency. Rather than relying on the C.D.C. to be the sole test developer, officials could also enlist clinical and commercial labs to create and deploy tests.

“It’s great that there’s all these additional checks in place, but what are you going to do when there’s a new emerging pathogen and we need to respond quickly?” she said. “I don’t think that’s a viable model for responding to a pandemic.”