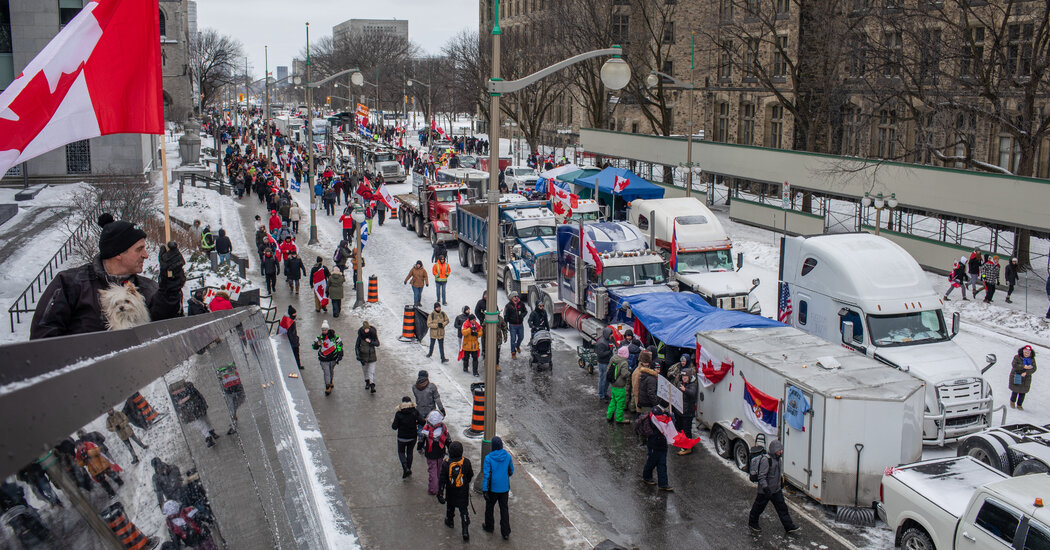 New details about the source of millions of dollars supporting the Canadian trucker convoy suggest many of the larger donors are wealthy Canadians, though one of the biggest contributions was made in the name of an American tech entrepreneur.

Leaked data said to be from the GiveSendGo crowdfunding platform, posted last night to a now-defunct web page by anonymous hackers, lists records of more than 92,000 donations totaling more than $8 million. A review of the data shows that some $4.3 million came from Canada, while an additional $3.6 million originated in the United States, though the United States accounted for the most individual donations. Small donations from dozens of other countries made up a fraction of the total amount raised.

One of the largest donations, for $90,000, is attributed to Thomas M. Siebel, a billionaire Silicon Valley entrepreneur and investor. He did not respond to a request for comment sent to the email address listed in the records and to his company.

Others who made donations ranging from $10,000 to $75,000 appear to be mostly Canadian business owners, with a few Americans in the mix.

Brad Howland, president of a New Brunswick-based company that makes pressure washers, appears in the leaked data as having donated $75,000, leaving the comment: “Hold the line!” In an email, Mr. Howland confirmed he was a donor, saying the protests “will go down in the history books.”

“Our company and my family are proud to stand with these men and women as they uphold the Charter of Rights and Freedoms of our great nation,” he said.

A donation for $17,760, attributed in the data to Travis Moore of Idaho, was accompanied by the comment: “Let freedom ring, brothers of the north. Cryptocurrency is the future.” A request for comment sent to Mr. Moore, using the email address listed in donation records, was answered with a reply containing a meme objecting to Covid restrictions.

Most of the comments left by donors expressed peaceful solidarity with the cause of opposing vaccine mandates and other pandemic restrictions. Mixed in with the positive messages, however, were some with a more menacing tone, like one left by an American who donated $50: “I’d rather pay to support this movement now than pay for bullets later.”

The presence of cryptocurrency evangelists among supporters of the convoy is apparent in a separate set of data reviewed by The New York Times. It shows donations were made in Bitcoin through a web page that went up after the initial fund-raising vehicle, GoFundMe, pulled the plug on the campaign. The new site, called “Bitcoin for Truckers,” is hosted by a cryptocurrency crowdfunding service, and had raised $946,000 as of Monday morning.

The Bitcoin campaign, which has received more than 5,000 mostly small-dollar donations, has been supported by a handful of large infusions from cryptocurrency boosters. The two biggest, with a combined value of more than $300,000 at the time they were made, were donated anonymously.

A series of others valued at about $42,000 each appear to be associated with an online challenge by a former software engineer who goes by the pseudonym LaserHodl and asked other Bitcoin fans to join him in supporting the trucker convoy. Jesse Powell, founder of the crypto exchange Kraken, tweeted his agreement, and a donation attributed to him appears in the data.

Benjamin Dichter, one of the convoy organizers, said at a news conference last week that after the cryptocurrency crowdfunding campaign began, he received offers of help from “major players” in the crypto markets.

“I was shocked how quickly I started getting messages from some of the most prominent Bitcoiners in the world,” he said.

The GiveSendGo data leak was announced Sunday evening on a webpage titled “GiveSendGo IS NOW FROZEN,” with a five-minute video in which a manifesto by the anonymous hackers scrolled across the screen. In it, the hackers complained that the trucker protest had “held a city hostage” and warned it “could be cover for a type of Trojan horse attack where extremists and militia groups may arrive in large numbers with weapons.”

The data contains a record for each donation that includes the donor’s name, ZIP code and the email address they used. It is not possible to independently verify every donation, but some of them line up with donations that had publicly appeared on the GiveSendGo website before it went offline.

For example, Mr. Siebel was cited last week by a Canadian news network, which noted that his name appeared with the $90,000 donation, at the time it was made, on the web page for the convoy campaign. About half the donations were not accompanied by a person’s name when they publicly appeared on the page.

GiveSendGo, which had earlier been the target of another data hacking that revealed personal information, such as driver’s licenses and passports, for some site users, was offline Monday morning. The company did not respond to a request for comment.

Organizers started a GiveSendGo campaign earlier this month after GoFundMe shut down an online fund-raiser that had raised nearly $7.8 million. The funds were to be used to “provide humanitarian aid and legal support for the peaceful truckers and their families,” Alex Shipley, a spokeswoman for GiveSendGo, told The Times in an email last week.