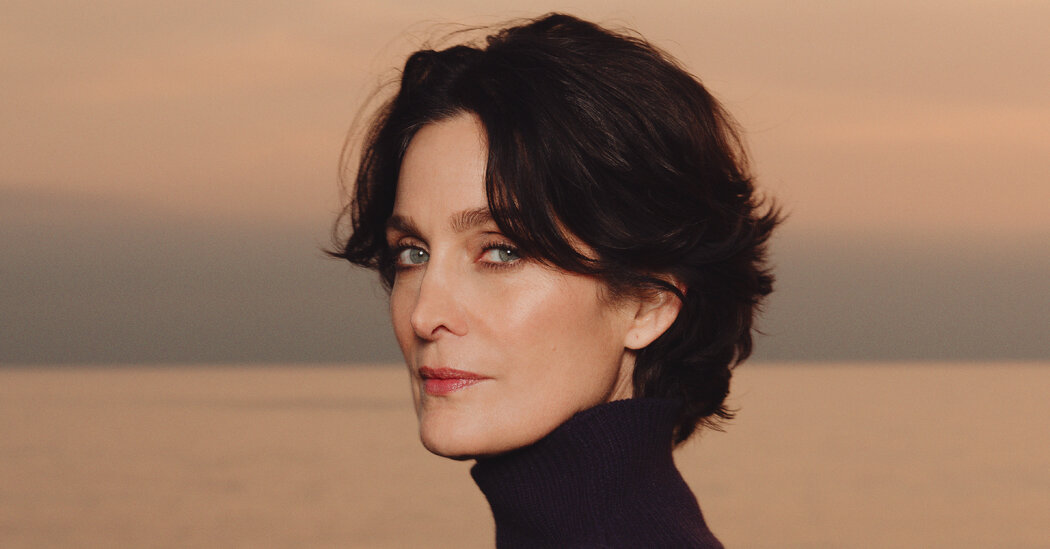 Carrie-Anne Moss was 32 when she joined the pantheon of science-fiction film legends. Taking her place alongside Sigourney Weaver as Ellen Ripley and Linda Hamilton as Sarah Connor, Moss played Trinity in “The Matrix” (1999), defying gravity with a martial-arts ballet. Lithe, pale, clad in form-fitting leather and PVC, Trinity and Keanu Reeves’s Neo formed two androgynous halves of a heroic whole in a tale of man vs. machine that became a worldwide cultural obsession.

The film’s blockbuster success spawned two immediate sequels, “The Matrix Reloaded” and “The Matrix Revolutions” (both released in 2003). Now, nearly two decades on, Moss is reprising her career-defining role for “The Matrix Resurrections,” written and directed by Lana Wachowski. Arriving in theaters and on HBO Max on Dec. 22, “Resurrections” required the now-54-year-old Moss to undergo weeks of intensive training before embarking on a demanding shoot that took the cast to San Francisco and Germany, among other locations.

Additionally, she had to shoulder the tremendous weight of expectation — it’s exceedingly rare for a woman over 50 to be both an action star and the romantic lead in a major studio film. “I feel a sense of responsibility to those women who love Trinity and felt ignited by her to be authentic at this age, and not be an idea that is unattainable and is perpetuating this myth about what it means to be a woman,” the friendly, down-to-earth Moss told me in a recent video interview from her home on the East Coast. “I carried that with me through the process.”

Here are edited excerpts from our conversation:

You wrote a piece for The Guardian in 2016 in which you mentioned having a “moment of clarity” once you realized you play women who are tough yet vulnerable. When did you first come to that realization?

The Return of ‘The Matrix’

In “The Matrix Resurrections,” written and directed by Lana Wachowski, Keanu Reeves plunges down the rabbit hole again.

It happened in an acting class with a teacher, Sandy Marshall — she teaches Meisner. She made that observation about me having a strength and a vulnerability. It became a powerful pivot for me to accept myself. I always wanted to play characters that were so different than me, yet when she showed me that, it gave me permission to step into what I did well. Trinity happened shortly thereafter.

It’s an ideal way to describe Trinity. She’s obviously tough, but she has this love for Neo that brings with it a certain kind of vulnerability. They’re a partnership of equals.

I always saw the [“Matrix”] movies as a love story. My entrance into the character and into the movie was always the love that I felt the movie was about, that I felt Trinity was about. I found a journal from that time — there’s a moment at the end of the first film where Trinity says to Neo, “The Oracle told me that I would know who the One was because I would love him.” I had written that story between Trinity and the Oracle [as part of her preparation for the role]. That was like a hidden treasure when I came across it. I had forgotten that I kept that journal. I was going through all my memorabilia from that time. It was such a profound time, shooting the first three movies.

What do you remember about that time in your life? What was it like to live inside of that experience, when “The Matrix” just exploded into popular culture?

It was a little overwhelming at first. I remember the first time I saw “The Matrix” with a crowd — other than a Hollywood crowd. The way that people reacted to certain lines that Trinity had, it was so deeply moving for me to feel that crowd cheering her on from the beginning. After those movies were done, I proceeded to have my family. Sometimes there are dramatic moments that anchor you. I was looking at a movie that had come my way, and I was holding my baby. I thought, At the end of my life, will it matter to me that I have another movie on my résumé or will it matter to me that I held my babies? It was an easy decision. I could spend the rest of my life with a sleeping baby on my chest.

Lately, you’ve been working in television — as an F.B.I. agent in the Scandinavian crime drama “Wisting,” and on “Jessica Jones,” playing Jeri Hogarth, the first openly lesbian character in a Marvel TV series.

“Jessica Jones” came to me at a time when I was thinking about working in a more consistent way. My kids were a little older. I loved the premise and the character. It also helped me to see that I could do it, I could leave and I could work, and it all could coexist together. “Wisting” was intriguing to me on many different levels, this multilingual show. I’ve always wanted to go to Norway and Ireland, and it shot in Norway and Ireland. I loved the people. Sometimes you don’t know what brings you to a role. There are so many different things at play.

On the first “Matrix” films, you injured your ankle, you broke your leg, you learned to ride a motorcycle. Did you have any trepidation about undertaking “Resurrections,” knowing what the physical demands could be?

No. Making those movies was so amazing. It doesn’t happen often, so [I was excited] to get to do it again, to be in that creative space with all these amazing artists. I flew to San Francisco for a reading with Keanu and Lana and a few other people. I knew nothing. We hung out a little bit, I hadn’t seen Keanu in a long time. There he is sitting next to me. It was like no time had passed at all.

How did you prepare for the action sequences?

Nothing will make you want to get in shape quicker than knowing you’re going to see yourself on a huge screen. I had to train for months to get strong and get in shape and to learn the fights, that took a lot of time. It was important to me that I let go of any construct in my mind that I needed to look like I did when I was 30. I find that thinking makes desperation as a woman, and I didn’t want any desperation. I knew I wanted to look good, but I didn’t want to do a juice cleanse, I didn’t want to do all these extreme things. I laugh because at times I would just feel so cool, I got this. Someone would take a little video, and I’d look at it and be like, “Oh my God, I don’t look cool at all!” I would just have to constantly relax that part of my brain. I continually chose to know I was going to be enough. I could have chosen that pressure, and I chose not to have it.

Did it feel good to be back on the motorcycle?

I like to push it, I like to do everything that I can in these movies. When I watch the first, second and third, the moments that aren’t me [when it’s a stunt performer instead]? It hurts me. But the bike that I’m on [in “Resurrections”] is actually too powerful for someone as inexperienced as me. I got on, and thank God I had some skill, because that bike went so fast. Instinct kicked in, and I was able to stop it. Otherwise, I would have flown off.

Once you were on set, did it feel like you were playing someone entirely new? Or was it like reuniting with an old friend?

It was like playing a different person with [Trinity buried somewhere] in there — but can’t we all relate to that? I’m not the same person I was at 30. The wonderful thing about shooting these films is all that training creates the character. All that training, all that time with Keanu, all that seeps in. It was almost as if this energy just comes through — it’s not anything you can really touch. I love that when you’ve done all this work, and then they call “Action,” and you just hope that you can catch that wave. For me, also, working opposite Keanu is really effortless and has a depth to it. It feels like a connection of our souls in a way that is beyond the intellect. As an artist, I know how rare that is to have that. It was like you could feel this other living entity basically that is these two characters.