Celtics Strike First in Finals by Rallying Past Warriors 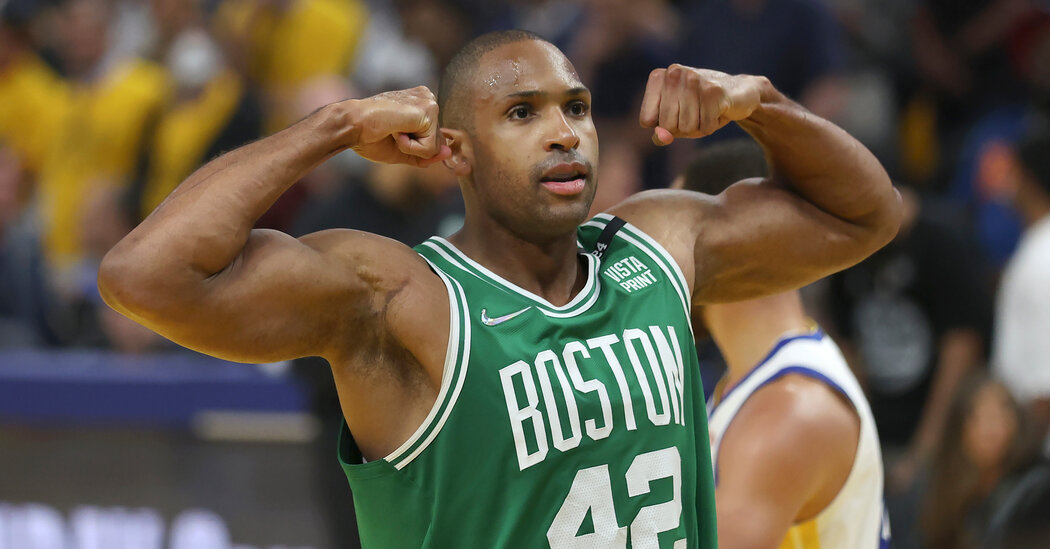 SAN FRANCISCO — The Boston Celtics’ reaction to winning Game 1 of the N.B.A. finals on Thursday night was a marked contrast from the joyous celebration they had held after winning Game 7 of the Eastern Conference finals earlier in the week. Instead of chest bumps at midcourt after the final buzzer, the Celtics walked stoically off the court on Thursday, each player stone-faced, some engrossed in conversations with coaches.

This stage was supposed to be too big for these Celtics, a team, though not a franchise, that was new to the finals. There were supposed to be jitters once the series started for this band of mostly 20-somethings facing a veteran Golden State Warriors team that has been here plenty of times. Perhaps the Celtics would act as if they had never done this before — because, well, they hadn’t.

Yet in their 120-108 victory in Game 1, the Celtics showed no indication that they would shy from the pressure and expectations that come with playing in the finals. They showed an ability to be hit first, and hard, only to recover and prevail anyway.

“We’ve been counted out all year,” Celtics guard Marcus Smart said. “Rightfully so. We’ve had moments. But we continue to fight. That’s who we are.”

Before Game 1, Celtics Coach Ime Udoka was asked if he thought finals experience was an overrated metric for predicting success in the series. In answering, he noted first that he and others on his staff did have experience in the finals, even if their players did not. But then he dismissed the premise that his team was at a disadvantage even before the series began.

“Our young guys have had a lot of success so far getting to the Eastern Conference finals multiple times,” Udoka said. “So for us: Try to simplify it, not overcomplicate it. Business as usual. Basketball as usual. The things we did to be successful coming here, we’ll try to do more of the same.”

It was more of the same in many ways.

The Celtics endured plenty of dramatic swings during the regular season and, more narrowly, in these playoffs. They struggled at the start of the year, then became the hottest team in the N.B.A. They absorbed blowout losses in the past two rounds of the playoffs, against the Milwaukee Bucks and the Miami Heat, then recovered to deliver blowout wins. Both series went to seven games.

So in Game 1, they were confident in their ability to recover from any problem. Udoka acknowledged noticing some early nerves but said he also saw them dissipate as the game progressed. Each time he looked at the score and saw it was close despite his team’s missteps, he took heart.

Stephen Curry, for example, scored 21 points in the first quarter, making six of eight 3-point attempts, which set a record for 3-pointers in a quarter in the finals.

“I think I found a lot of space obviously in the first quarter and just was trying to ride that wave as long as I could,” Curry said. But Boston made adjustments and Curry didn’t score in the second quarter. He finished with 34 points.

Another Boston turnaround came in the second half.

In the third quarter, the Warriors outscored the Celtics by 14 points, seeming to pull away and opening a 15-point lead at one point. Golden State is famous for its ability to dominate third quarters on its way to wins, but this time it didn’t work.

Boston made defensive adjustments to respond to what they’d seen in the third quarter and held Golden State to just 16 points in the fourth. Their offense suddenly looked unstoppable. The Celtics scored 40 points in the fourth quarter, and, at one point, Boston made seven consecutive threes. Al Horford scored 11 fourth-quarter points and Jaylen Brown scored 10.

“The message at the start of the fourth was, we’ve been here before,” Jayson Tatum said. “We know what it takes to overcome a deficit like that.”

He added: “We had a lot of time left, right? It wasn’t time to hang your head or be done, it was time to figure it out.”

Tatum himself proved an example of Boston’s ability to adapt and adjust in the face of struggles. He shot 3 for 17 in the game, but remained engaged, finishing with more assists (13) than points (12). In the fourth quarter, the Celtics outscored Golden State by 27 points when Tatum was on the court. Despite his poor shooting, he declared himself “ecstatic.”

“I had a bad shooting night,” Tatum said. “I just tried to impact the game in other ways. We’re in the championship. We’re in the finals. All I was worried about was trying to get a win, and we did.”

Golden State will certainly adjust to what went wrong Thursday night. Their coach, Steve Kerr, has said the challenge of figuring out how to do that is his favorite part about being in the playoffs. A series affords the opportunity to strategize much more than a single game during the regular season.

Tatum was playing the long game after Boston’s victory, too. He said the Celtics had shown a tendency in past series for easing their intensity after wins, something they cannot afford to do against Golden State.

“This time of the season, you feel great after you win,” Tatum said. “You feel terrible after you lose. You got to just be able to stay mellow, stay balanced, especially this early.

“It’s far from over, right? It’s just one game. And we got to be ready for them to respond as if we would if we lost the first game.”