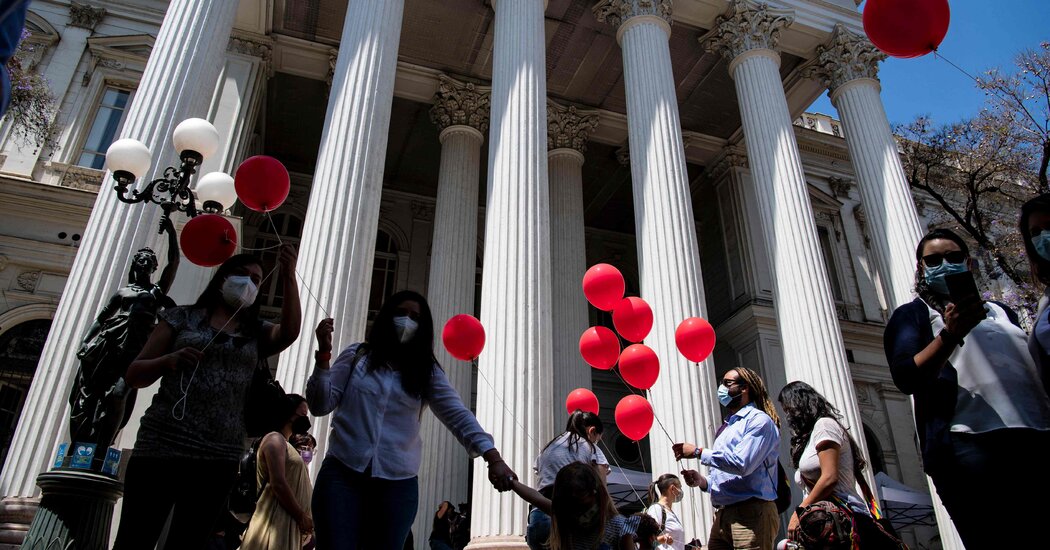 SANTIAGO, Chile — Lawmakers in Chile on Tuesday legalized same-sex marriage, a landmark victory for gay rights activists that underscores how profoundly the country’s politics and society have shifted in the past decade.

By overwhelming majorities in both chambers, lawmakers put the unions of same-sex couples on par with others, making Chile the 31st nation to allow gay marriage and taking a significant step toward consolidating it as the norm in Latin America.

The vote comes as Chile, long seen as a stable and conservative country in the region, grapples with an urgent demand for sweeping social change from various sectors of society. Millions of Chileans took to the streets in 2019 in protests that culminated in a vote to scrap the Constitution, a document inherited from Gen. Augusto Pinochet’s dictatorship, and rewrite the laws that frame the nation.

The moment of reckoning showed how out of touch the political class had been on a broad range of issues, including gay rights, said Rolando Jiménez, one of the leaders of Movilh, a leading gay rights organization in Chile.

“The political class had been deaf, blind and mute regarding a series of matters on which civil society and ordinary Chileans had advanced,” he said.

President Sebastián Piñera, a longtime opponent of same-sex marriage, startled the political establishment in June by coming out in favor of such unions. He urged Congress to prioritize passing a bill that had languished for years, ensuring the legislation will be among the last achievements of a turbulent presidency.

The measure will be signed into law at the final stretch of Chile’s polarized presidential race. The vote is on Dec. 19, and the leading candidates — Gabriel Boric, a leftist former student activist, and José Antonio Kast, a far-right former congressman — are bitterly at odds on a vast array of issues, including same-sex marriage.

On Tuesday afternoon, during a meeting with evangelical leaders, Mr. Kast said he disagreed with the new law.

“We respect democracy, but that doesn’t mean we change our convictions,” he said. “For us, marriage is between a man and a woman.”

While the movement for same-sex marriage has advanced slowly in much of the world in recent years, the vast majority of Latin Americans now live in countries where those unions are legal. In some large nations, including Brazil and Mexico, the right has been conferred by the courts.

The fight to extend the right to marriage to same-sex couples in Chile began in September 2010, when César Peralta and Hans Arias, a couple who were raising two children, walked into a government office in Santiago and asked to be married, knowing full well their request would be denied.

The request was denied, as expected, and the couple left the building to address the reporters who had been convened outside by Movilh, the gay rights organization.

It was the first salvo of a legal battle that unfolded for more than a decade before judges at home and abroad.

Mr. Peralta followed the vote and wept as he heard the result.

“I am so moved and so happy that our country, our people, our community, will now have a little more dignity,” he said. “I am so happy to have been a part of all this.”

Gay activists in Chile were well aware of the odds they faced when they set the legalization process in motion.

Gay rights activists in Latin America had been emboldened by Argentina, which became the first nation in the region to legalize same-sex marriage with a congressional vote in July 2010.

At the time, neighboring Chile, which was more politically conservative, was far from ready to follow suit. A law outlawing sodomy was only repealed in 1999. Divorce became legal in 2004.

By 2010, some Chilean lawmakers had proposed a civil union law for unmarried couples, but few leading politicians publicly favored broadening the definition of marriage or granting same-sex couples the right to adopt children.

Realizing it had little legislative support, Movilh took the case to the appeals court in late 2010, and eventually to the Supreme Court, which in April 2012 ruled against the plaintiffs.

That ruling paved the way for Movilh to sue Chile in 2012 before the Inter-American Commission on Human Rights, a judicial body that considers legal disputes originating in member states.

As the case was being litigated, Chile passed a civil unions law in 2015, but gay rights groups argued that same-sex couples were still deprived of crucial rights, including the ability to adopt.

After years of negotiations with the commission, in June 2016 the Chilean government agreed to set in motion a process to legalize same-sex marriage.

In 2017, the president at the time, Michelle Bachelet — a center-left politician who had previously argued that marriage should be limited to a man and a woman — introduced a same-sex marriage bill.

“Old prejudices cannot be stronger than love,” she said.

The limited momentum the bill had fizzled as Mr. Piñera, a conservative, took office.

But by October 2019, halfway through his term, Chile was rattled by months of huge demonstrations over inequality, cost of living and social rights. And Mr. Piñera, to the surprise of critics and supporters alike, changed his mind.

In a speech in early June, he said he now supported same-sex marriage. “Today, I think we need to reflect on the value of freedom, including the freedom to love and build a family with a loved one,” he said.

Mr. Piñera gave the bill a high-priority status, which paved the way for Tuesday’s vote.

The two men vying to replace Mr. Piñera include Gabriel Boric, a leftist former student movement leader who is a vocal supporter of gay equality, and José Antonio Kast, a far-right former lawmaker who opposes marriage equality and has spoken with contempt about homosexuality.

In addition to Argentina, same-sex marriage is legal in Latin America in Brazil, Colombia, Ecuador, Uruguay, Costa Rica and 24 of Mexico’s 32 states.

Chile’s new law will enable same-sex parents to have parental rights over the biological or adopted children of a spouse and creates standard rules on inheritance and other financial matters.

Mr. Peralta and Mr. Arias split up in 2014. But Mr. Peralta said that does not make Tuesday’s victory any less significant for him. While they were in the public spotlight, the couple endured ridicule and criticism, including from Chileans who said they should not be allowed to raise Mr. Peralta’s two biological children.