Chileans Will Vote For President on Sunday 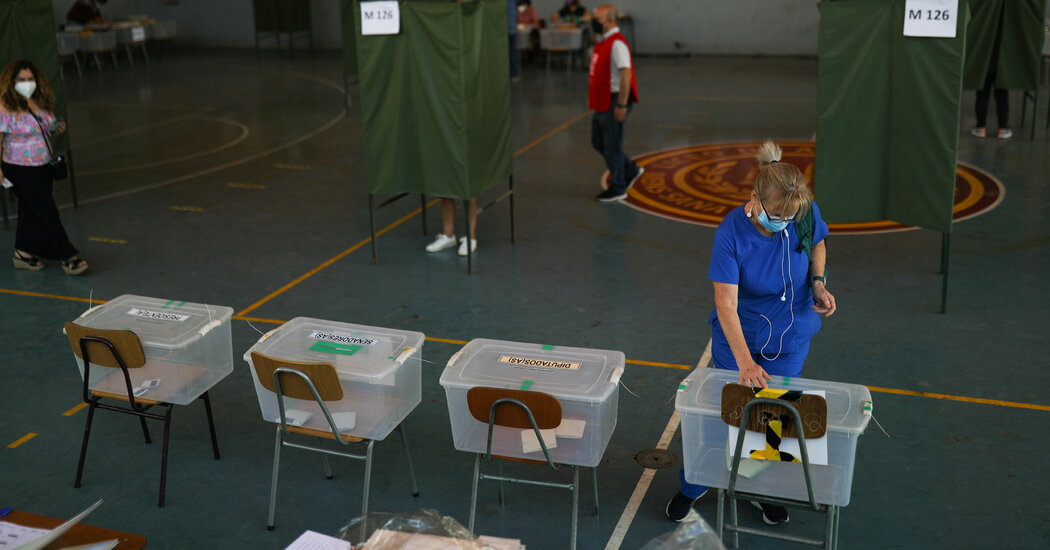 SANTIAGO, Chile — Chileans on Sunday gave the lead in the country’s presidential race to a far-right politician, a stunning development in a nation that has been rattled by political and social protest over inequality and the rising cost of living.

With more than 88 percent of the vote counted, José Antonio Kast, a conservative lawyer and former lawmaker who promised to restore security and order and to dramatically reduce the size of the state, had carved out a three-point lead over his leftist rival, Gabriel Boric. The two will face off in a runoff on Dec. 19.

The race followed an unusually turbulent period in the South American nation, which has been governed for decades by centrist parties and had, until recently, been regarded as one of the region’s most stable and prosperous democracies.

Chile’s departing president narrowly dodged impeachment this month. A month earlier, the army was deployed to the south to confront an increasingly violent uprising by Indigenous militants. And since July, delegates in the capital have been drafting a new Constitution, prompted by sweeping protests in 2019 over inequality and the rising cost of living.

This tumultuous period, made still more unsettled by the coronavirus pandemic, set the stage for the first round of an unusually polarized presidential election on Sunday. The centrist coalitions that have traded power in recent decades were underdogs in a race led by more radical candidates offering Chileans starkly opposed visions for the future.

Chile’s election is among several in Latin America in which incumbents and governing parties are on the defensive, partly because of the upheaval and economic pain the pandemic has inflicted. Foremost are next year’s presidential contests in Brazil and Colombia, where the virus has killed hundreds of thousands of people and crippled large segments of their economies.

“Covid exposed inequalities, it exacerbated inequalities and made it easy to politicize those inequalities in a way that we expect will be very hard on incumbents,” said Jennifer Pribble, a political science professor at the University of Richmond who specializes in Latin America. “It has generated malaise and discontent that citizens have to put on someone.”

The leading candidates vying to replace President Sebastián Piñera — who is not eligible for re-election — are on opposite sides of the political spectrum. Mr. Boric, a leftist lawmaker, promises to vastly expand the safety net, and Mr. Kast, a far-right former congressman, proposes a drastically leaner state in which the security forces are given broader authority to quell violence and disorder.

The latest public opinion polls in Chile — which have been unreliable in recent elections — had tracked Mr. Kast’s growing appeal among voters in the final stretch of the campaign. The polls also suggested that Mr. Boric would prevail in a runoff in December if.

Mr. Kast — who won 8 percent of the vote when he ran for president in 2017 — and Mr. Boric surprised political observers by rising to the top of the presidential contest as more moderate politicians gained little traction.

Both tapped into the simmering discontent with the establishment parties that have dominated politics in Chile since the return of democracy in the 1990s.

Grisel Riquelme, a 39-year-old seamstress in Santiago, the capital, who runs a small family business, said she had become so frustrated with politics that she may spoil her ballot in protest.

Dissatisfaction with the status quo burst out unexpectedly in October 2019, when an increase in Santiago subway fares set off a monthslong wave of demonstrations. Vandalism, including arson of subway stations and other government buildings, elicited a tough response by security forces, which fired rubber bullets into crowds of demonstrators, blinding hundreds.

After failing to calm the streets for weeks, Mr. Piñera, a billionaire who was far from the ideal leader to tackle an uprising over inequality, agreed to support an initiative to convene a constitutional convention in late December 2019.

That process began in May with the election of delegates representing broad segments of Chilean society that had historically been marginalized. The body drafting the new Constitution has gender parity and is led by Elisa Loncón, a scholar from the Mapuche Indigenous community.

Given how unstable and violent Chile’s streets became in 2019, and how many Latin Americans have lost faith in democracy, the deal to create a new Constitution was a major achievement, argued Pia Mundaca, the executive director of Espacio Público, a research group in Chile that studies the political system.

“It’s very powerful, given our history in Latin America with democracy and undemocratic moments, that a political crisis as profound as the one Chile faced in late 2019 found a democratic and institutional exit,” she said.

The constitutional convention delegates are debating large-scale economic and social rights, which could upend matters like the pension system, reproductive rights and Indigenous claims over their ancestral lands.

Mr. Boric, 35, a tattooed politician who eschews neckties and would become Chile’s youngest leader ever, has been a vocal supporter of the new constitution process, which he sees as a vehicle to drastically overhaul Chile’s market-friendly economy and political system.

“If Chile was the cradle of neoliberalism, it will also be its grave,” his campaign platform says.

Mr. Boric, who is from Punta Arenas, a city in the far south, has proposed a wholesale overhaul of the social security system, shortening the workweek to 40 hours from 44 and forgiving student debt. The significant increase in public spending he envisions would be offset by new taxes on the ultrarich and a more effective system to fight corruption, his campaign platform says.

He supports legalizing abortion — which is outlawed in Chile with a handful of exceptions — and same-sex marriage.

Mr. Kast, 55, a lawyer who served in Congress from 2002 to 2018, adamantly opposes same-sex marriage and legalized abortion. He has proposed hard-line tactics to restore security in the country, highlighted by a proposal to build a ditch along the border with Bolivia, a gateway for undocumented immigrants.

He says the Chilean bureaucracy ought to be radically downsized, calling for consolidating 24 ministries into 12 but favoring a significant expansion of the prison system. His strong-armed approach would extend to an armed uprising by Mapuche Indigenous factions in the Aracaunía region, where some seek to restore ancestral lands controlled by lumber companies by occupying the lands and burning trucks, homes and churches.

He leaves office with nearly 79 percent of the electorate disapproving of his performance, and with many taking a dim view of the political class’s handling of the challenges of the past few years.

“Governing has never been easy, and we faced especially hard times,” he said in an address on Wednesday. “Unfortunately, this time around, I feel that in the world of politics we have lacked greatness, unity, collaboration, dialogue and agreements to face the enormous and pressing challenges.”

Vivian Asun, 21, a law student in Santiago, said she had little faith that Mr. Piñera’s successor would prove more effective. She was unable to vote on Sunday because she is far from the city where she is registered. But it is just as well, she said.

“I have no idea who I would vote for,” she said. “It’s not that I’m indifferent about who wins, but there’s no candidate who can address the needs we’re facing as a nation.”