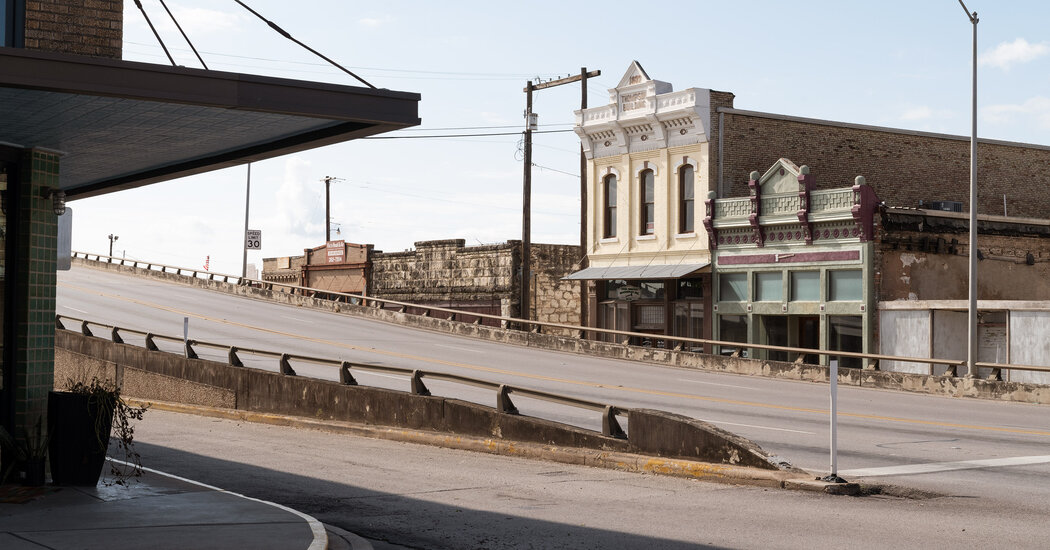 TAYLOR, Texas — The shortage of computer chips has zapped energy from the global economy, punishing industries as varied as automakers and medical device manufacturers and contributing to fears about high inflation.

But many states and cities in America are starting to see a silver lining: the possibility that efforts to sharply increase chip production in the United States will lead to a busy chip factory in their backyard. And they are racing to get a piece of the potential boom.

One of those towns is Taylor, a Texas city of about 17,000 about a 40-minute drive northeast of Austin. Leaders here are pulling out all the stops to get a $17 billion Samsung plant that the company plans to build in the United States starting early next year.

The city, its school district and the county plan to offer Samsung hundreds of millions of dollars in financial incentives, including tax rebates. The community also has arranged for water to be piped in from an adjacent county to be used by the plant.

But Taylor is not alone. Officials in Arizona and in Genesee County in upstate New York are also trying to woo the company. So, too, are politicians in nearby Travis County, home to Austin, where Samsung already has a plant. Locations in all three states “offered robust property tax abatement” and funds to build out infrastructure for the plant, Samsung said in a filing. Congress is considering whether to offer its own subsidies to chip makers that build in the United States.

Where Samsung’s plant will land remains anyone’s guess. The company says it is still weighing where to put it. A decision is expected to be announced any day.

The federal government has urged companies like Samsung, one of the world’s largest makers of the high-tech components, to build new plants in the United States, calling it an economic and national security imperative. Intel broke ground on two plants in Arizona in September and could announce the location for a planned manufacturing campus by the end of the year.

This could just be a warm-up act. The Senate passed a bill to provide chip makers $52 billion in subsidies this year, a plan supported by the Biden administration that would be Washington’s biggest investment in industrial policy in decades. The House has yet to consider it. Nine governors said in a letter to congressional leaders that the funding would “provide a new, powerful tool in our states’ economic development toolboxes.”

In Taylor, even the possibility of Samsung’s arrival is generating hope. Business owners say it would bring more patrons to the local brewery and to the quiet downtown. Parents think the factory’s cutting-edge assembly line would inspire the town’s high school students. Residents believe land prices would rise quickly — values have already edged up in recent months just on the possibility, one real estate agent said.

“Something like this can be a shot in the arm,” said Ian Davis, the chief executive of Texas Beer Company, which opened a taproom in downtown Taylor five years ago.

The vast majority of semiconductors — an industry that generated nearly $450 billion in revenue in 2020 — are made in Taiwan, South Korea and mainland China. The United States controls just 12 percent of global production.

Lawmakers say the chip shortages illuminate how America’s limited role in the industry puts the nation’s economy in a precarious position. Politicians also fear that China is taking steps to increase its control of global semiconductor supplies, potentially leaving the United States at a technological disadvantage against a geopolitical rival that would have national security implications.

But the cities’ attempts to lure the plants are raising questions about how far communities should go — and how much taxpayer money they should pay — to get a piece of the high-tech economy.

Chandler, Ariz., approved up to $30 million in water and road improvements to support an Intel plant that broke ground in September. Phoenix will spend roughly $200 million on infrastructure for a new factory by the Taiwan Semiconductor Manufacturing Company, another major chip maker. When the company announced the plant in 2020, it said subsidies were crucial to its plans.

Critics of corporate tax incentives say the money could be better spent on basic infrastructure and on public schools. They say cities might be spending taxpayer funds needlessly, because factors like the availability of talent and of natural resources are more important to chip makers than subsidies. And they argue that cities end up sacrificing the most important thing a big industrial project can contribute: tax revenue.

“There’s clearly benefits,” said Nathan Jensen, a professor at the University of Texas at Austin who studies subsidy programs. “The problem is if you’re literally giving away a lot of those benefits to land the company.”

Many residents in Taylor said that was the price they needed to pay to supercharge the city’s revival.

Taylor — named for a railroad executive — was once a hub for shipping cattle and cotton. Louie Mueller Barbecue opened in 1949 and still draws carnivores with its brisket and beef ribs.

But in recent decades, residents said, Taylor’s downtown has lost some vitality.

They have tried to change that by luring newer small businesses to the city and by renovating an old building that now houses Mr. Davis’s taproom, converted lofts and a coffee shop that serves babka and chocolate-tahini brownies. Another group repurposed the town’s old high school to house small businesses including restaurants and a pinball bar. The city spruced up a downtown park.

“Bringing that in, something that’s going to be here indefinitely, the revenue that it brings for our city and for our schools, particularly, is going to be enormous,” said Susan Green, a Taylor resident who has children in its school system.

Steve Adler, the mayor of Austin, said subsidies that Austin gave to Samsung in the 1990s had had a positive effect on the city, which has seen rapid growth in recent years. Tesla and Oracle recently moved their corporate headquarters to Austin, and Facebook and Apple have large operations there. By one estimate, the city is the nation’s top site for commercial real estate investment.

Austin and its surrounding county have held their own talks with Samsung about the new factory the company has planned. Mr. Adler said he wanted the city to be a competitive site for the Samsung plant.

“It certainly paid a huge benefit to our city and our region, having them here,” Mr. Adler said about Samsung. But Pat Garofalo, the director of state and local policy for the American Economic Liberties Project, a liberal group that is critical of large tech companies, said the money would be better spent on projects that made a city attractive to a wide variety of businesses — like public schools — instead of on a single suitor.

He said the manufacturers sensed the “very real problem” of the semiconductor shortage and “are using it to capitalize on the tendency among state and local officials to pay a lot of taxpayer money for hosting one of these facilities.”

Vanessa Fuentes, a member of the Austin City Council, said residents of her district worried about being pushed out of their homes or seeing corner stores replaced by expensive grocery stores. She said the city had the “upper hand” in dealing with tech companies and should make sure that any deal it cut with tech companies did enough for existing residents.

“If it’s not good enough, then we don’t need to do it, quite frankly,” she said. “Because there’s too much at risk of what could happen with this type of growth, in terms of displacement specifically.”

In Taylor, Samsung’s boosters believe that they can manage those concerns if they get the project.

To sweeten the deal, Mr. Davis recently made another offer to the chip maker at a public meeting: He’ll make a Samsung pale ale.

“I think having 5,000 daily construction workers patronize all these small businesses — pros will outweigh the cons by a mile,” he said.