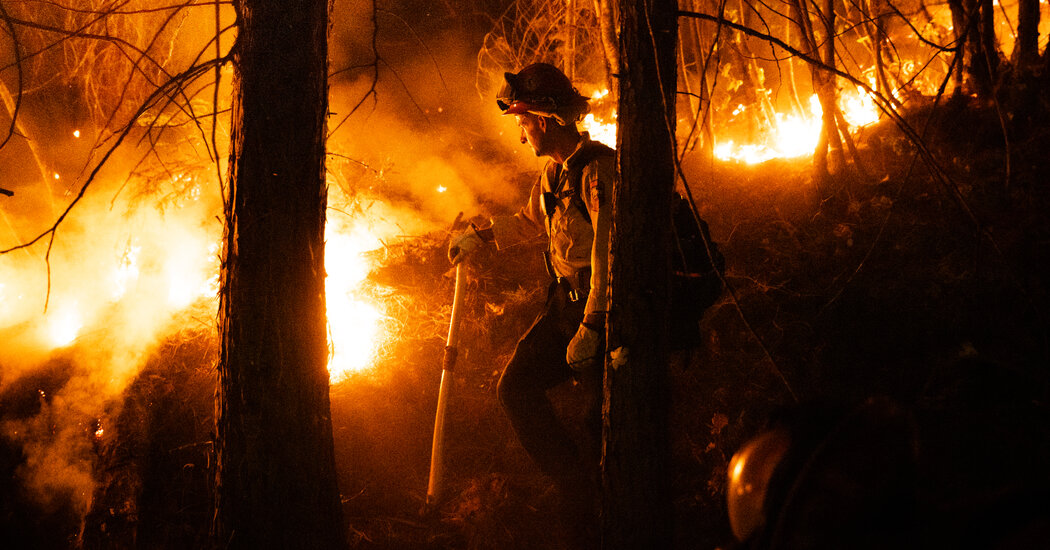 WASHINGTON — Federal regulators warned for the first time in an annual report to Congress on Friday that climate change was an “emerging threat” to the U.S. financial system, laying out how the costs associated with more hurricanes, wildfires and floods caused by global warming could lead to a cascade of damage throughout the economy.

The Financial Stability Oversight Council, a group of top financial regulators led by the Treasury secretary, offered a grim assessment of how the fallout from rising temperatures could spread, hurting property values and saddling insurers, banks and pensions that are associated with the sector with heavy losses. The report follows a similar analysis of climate risk that the council released in October.

However, the report stopped short of the kinds of policy prescriptions that environmental groups and progressive Democrats have been calling for, such as tougher rules requiring banks to assess their ability to withstand climate-related losses, new capital requirements or curbs on extending financing to fossil fuel companies. Instead, it echoed a set of recommendations from the October report that called for improved data for evaluating climate-related financial risks and more uniform disclosure requirements to help investors make better informed decisions.

The warning on climate change was one of several looming threats to the financial system, which faces ongoing uncertainty nearly two years into a global pandemic that is being gripped by a new variant.

What to Know About Inflation in the U.S.

In its annual report, the panel also issued a warning about the risk of higher than expected inflation, suggesting that it would lead to higher interest rates and losses at some financial institutions, blunting the momentum of the recovery.

The report comes as the Federal Reserve said this week that it would accelerate the end of its monthly bond buying program, which it has used to buttress economic growth during the pandemic, and raise interest rates three times next year to combat inflation.

The F.S.O.C. regulators attributed inflation in advanced economies to “an increase in commodity prices, supply chain disruptions, and labor shortages.” They warned that a rapid or unexpected rise in interest rates to blunt rising prices could induce “sharp contractionary forces” and acknowledged that it was unclear how long inflation would persist.

“The advent of higher inflation also raises the question of whether longer-term inflation expectations of households and businesses will rise or become unanchored,” the report said.

The trajectory of the global economy is also a concern, as lockdowns and downturns in other countries could spill over into the U.S. financial system. Regulators pointed specifically to the prospect of a “hard landing” in China as a potential worry and noted that the Chinese real estate sector is “heavily leveraged.” A slowdown in the real estate market there could hurt global commodity markets because China is such a major consumer of steel, copper and iron ore.

What is inflation? Inflation is a loss of purchasing power over time, meaning your dollar will not go as far tomorrow as it did today. It is typically expressed as the annual change in prices for everyday goods and services such as food, furniture, apparel, transportation costs and toys.

Is inflation bad? It depends on the circumstances. Fast price increases spell trouble, but moderate price gains could also lead to higher wages and job growth.

The report also highlighted the fact that the pandemic has ushered in changes to the economy that remain hard to grasp.

The F.S.O.C. is closely watching the commercial real estate sector, for instance, out of concern that the rise of teleworking could permanently shift demand away from office space in cities. If this shift leads to a rapid drop in valuations at some point, it could deal a blow to small and midsize banks that hold property loans and destabilize the financial system.

Corporate credit also remains a concern, with leverage at non-financial corporations elevated compared with historical levels. Regulators are watching the airline, hospitality and restaurant industries, which have been hit hard by the pandemic, and warned that a wave of defaults or downgrades could be difficult for the financial sector to absorb.

The financial system is also facing an array of new threats.

Digital assets, known as stablecoins, are another potential source of vulnerability, regulators said, adding that more coordinated oversight is needed because the sector is evolving so quickly. They said that the value of digital assets remained highly volatile and that they could be subject to “the risk of operational failures, fraud, and market manipulation.”

The new technology could pose risks to the broader financial system if investors in digital currencies are suddenly unable to cash them in. The regulators also said that stablecoins could pose risks related to cybersecurity and illicit finance.

The F.S.O.C. does not have rule-writing power but it can prod regulators into addressing market vulnerabilities, and it has the power to designate certain entities or activities as “systemic” and in need of stricter oversight.