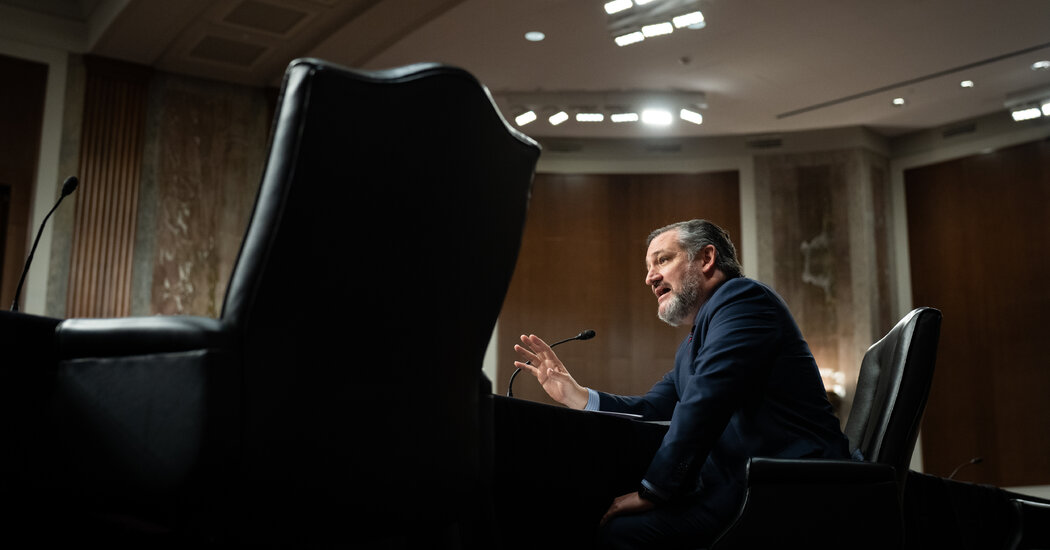 WASHINGTON — A Senate deal has set the stage for a January vote on whether to sanction the company behind a natural gas pipeline from Russia to Germany, complicating the Biden administration’s efforts to prevent a Russian invasion of Ukraine.

The upcoming vote means the new year in Congress will begin in part with a contentious debate about the Nord Stream 2 pipeline project, which the Biden administration opposes but has not used all its powers to stop, for fear of damaging vital relations with Germany.

The $11 billion pipeline was completed in September but is awaiting certification to become operational. Leaders of Germany’s new governing coalition have said they will not allow gas to flow if President Vladimir V. Putin of Russia invades Ukraine, along whose border he has massed up to 100,000 troops.

The Senate deal, which was reached late Friday night, was a grudging concession by Democrats to Republican Senator Ted Cruz of Texas, who has delayed the confirmation of dozens of President Biden’s nominees to protest what he called Mr. Biden’s weak opposition to the pipeline. Mr. Cruz and others insist that Nord Stream 2 will provide Russia with a cash infusion and dangerous control over Europe’s energy supplies, while potentially costing Ukraine’s government around $3 billion in annual transit fees from a similar pipeline through its territory that Russia could circumvent.

“Major victory,” Mr. Cruz wrote on Twitter. “When the Senate reconvenes, we’ll finally have a vote on sanctioning Putin’s pipeline.”

It is a vote the Biden administration hoped to avoid. But in exchange, Mr. Cruz agreed to step aside and allow the confirmation of 36 of Mr. Biden’s State Department and Treasury Department nominees, including 28 ambassadors — some of whom were nominated months ago. Among them was Mr. Biden’s pick for ambassador to Japan, Rahm Emanuel, the former mayor of Chicago, along with envoys to France, Poland and the European Union.

Senator Chuck Schumer of New York, the majority leader, promised Mr. Cruz that he would hold a vote on the legislation by Jan. 14, setting the stage for a potential Senate rebuke of Mr. Biden. Mr. Cruz was irate when the Biden administration in May waived congressional sanctions against Nord Stream AG, the operator of the pipeline, and its German chief executive.

Biden officials said at the time that while they opposed construction of the pipeline, which will pump gas from the Russian Arctic to Germany through the Baltic Sea, the project was nearly complete by the time Mr. Biden took office and virtually impossible to stop. At this point, White House officials say, the cost of friction with the German government outweighs any potential loss to Mr. Putin.

German officials have said that the project will not be officially certified and operational for several more months. Briefing reporters at the White House last week, Mr. Biden’s national security adviser, Jake Sullivan, said that means that the pipeline is “not leverage for Putin. Indeed, it is leverage for the West, because if Vladimir Putin wants to see gas flow through that pipeline, he may not want to take the risk of invading Ukraine.”

But some analysts say the pipeline may be less important to Mr. Putin than his longtime designs on Ukrainian territory.

Under the deal with Mr. Schumer, Mr. Cruz’s bill will require 60 votes for passage — a possibility given that many Senate Democrats oppose the Nord Stream project. It is unclear whether House Speaker Nancy Pelosi would take up the measure after Senate passage; that might depend on whether Mr. Putin has de-escalated his military presence along Ukraine’s border. A Dec. 7 call between Mr. Biden and Mr. Putin has done little to soothe the situation, and last week the Kremlin issued a set of demands that Biden officials called largely unacceptable.

Senator Chris Coons, Democratic of Delaware and a close Biden ally who helped to negotiate the deal, said he would wait to see the final language in the measure and confer with Biden officials before deciding how he will vote. A State Department spokesman did not respond to a request for comment.

Mr. Coons said he recently met in Berlin with Olaf Sholz, who succeeded Angela Merkel this month as Germany’s chancellor. He noted the new German government’s pledge not to certify the pipeline until well into 2022.

“Imposing sanctions on a close ally like Germany when they are moving in the right direction is something that I would not do lightly,” Mr. Coons said.

In a separate deal on Thursday, the Senate confirmed R. Nicholas Burns as Mr. Biden’s choice for U.S. ambassador to China.

That vote followed a different agreement, this one with Senator Marco Rubio, Republican of Florida, who had blocked Mr. Burns’s confirmation. Mr. Rubio had insisted that the Senate vote on his bill forcing U.S. companies to prove that goods manufactured in China’s Xinjiang region were not produced with the forced labor of Uyghur Muslims.

In all, the Senate confirmed 85 nominees last week, according to the White House, which said that made for an annual total 40 higher than in President Donald J. Trump’s first year in office.

Mr. Cruz has said in the past that he would allow more nominees to be confirmed if Congress sends a bill sanctioning the Nord Stream project to Mr. Biden.

According to the White House, 287 of Mr. Biden’s nominees across the government remain unconfirmed, including dozens of ambassadors and other State Department officials.

“We need a fully staffed senior team at the State Department and at the United Nations, and ambassadors around the world,” Mr. Coons said. “And while I respect that senators of both parties have the right to use the occasional hold to force a policy discussion, I think this has gotten way out of hand.”