Defiant Protesters in Canada Brace for a Clampdown 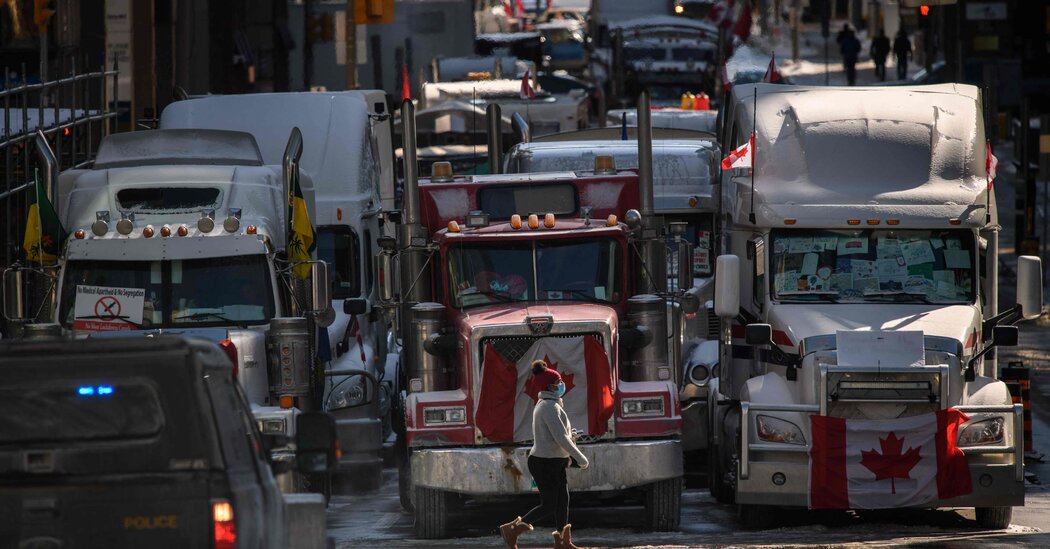 The police on Wednesday ordered protesters clogging Ottawa’s streets to leave or face criminal charges, appearing to set the stage for a clampdown aimed at ending demonstrations that have roiled the nation’s capital for weeks, and reverberated around the world.

The impetus to stop protests buffeting the country was amplified this week after the Royal Canadian Mounted Police, Canada’s national police, said Tuesday that four protesters in Alberta had been charged with conspiracy to murder R.C.M.P. police officers. Police officials said those arrested belonged to a small cell in the province that planned to use violence if officers tried to break up a now-disbanded blockade in Coutts, a village in southern Alberta bordering Montana.

A stockpile of weapons — including 13 long guns, handguns, a machete, multiple sets of body armor, and a large quantity of ammunition and magazines — was discovered by the police in trailers in Alberta on Monday morning.

Thirteen people were arrested, ranging in age from 18 to 62, the R.C.M.P said. In addition to charging four with conspiracy to commit murder, the police charged most of the remaining protesters with possession of a weapon.

The arrests in Coutts and warnings in Ottawa come as Prime Minister Justin Trudeau this week has made his most aggressive move yet, declaring a national emergency aimed at ending the demonstrations that began nearly three weeks ago to protest vaccine mandates, but have transformed into a battle cry against pandemic restrictions in general and against his premiership.

Mr. Trudeau’s invocation of the Emergencies Act was the first time in more than a half-century that a Canadian government had taken such a drastic step. Police officials across the country can now seize trucks and other vehicles used in the protests — though most of the most disruptive blockades or demonstrations, besides Ottawa, had been tamed or overcome by Wednesday. Demonstrations that “go beyond lawful protest” would be banned, the prime minister said, and the government would formally bar blockades in designated areas like border crossings, airports and the capital.

In what appeared to be a preamble to clearing the demonstrations in Ottawa, the Ottawa Police Service on Wednesday distributed leaflets warning protesters to leave or risk being arrested.

“You must leave the area now,” the Ottawa Police Service said in a statement and in leaflets handed out to protesters. “Anyone blocking streets, or assisting others in the blocking streets, are committing a criminal offense and you may be arrested,” the warnings said. “You must immediately cease further unlawful activity or you will face charges.”

The statement added that anyone coming to Ottawa to join the demonstration would also be breaking the law.

But on Wednesday, protesters remaining in the capital appeared defiant.

Andrew Broe, 52, a trucker from Trenton, Ontario, took the leaflet from the police and threw it into the fire he was tending in a canister to keep warm on the street outside the Parliament building. “It is a piece of encouragement,” he said, referring to the leaflet. “They are drawing at straws trying to remove a peaceful protest.”

Denis Brown, 57, who said he quit his job as a technology service provider because he didn’t want to get vaccinated for travel, was circulating his own message on a piece of paper: The politicians should be arrested, it said.

At a news conference on Wednesday, protest organizers called on more demonstrators to pour into Ottawa to help foil police efforts to put the occupation down.

But the patience of many Canadians with the protests is growing thinner by the day. The nation’s image of serenity and order has given way to scenes of truckers shouting “freedom,” honking horns, confronting police and, in some cases, taunting fellow citizens who wear masks. Blockades have undermined the economy, while the demonstrations have dented Canada’s reputation on the global stage as a nation of stability.

Understand the Trucker Protests in Canada

Voicing grievances. A demonstration by truck drivers protesting vaccine mandates has ballooned into a nationwide movement that has slowed the economy and brought life to a standstill in parts of Canada. Here’s what to know:

State of emergency. On Feb. 14, Prime Minister Justin Trudeau took the rare step of declaring a national public order emergency aimed at stopping the protests. The order allows the police to seize trucks and other vehicles, and the government to ban blockades in designated areas.

Opinion data released this week by the Angus Reid Institute, a leading polling group, showed that nearly three-quarters of Canadians say the time has come for protesters to go home.

“If the goal of the Freedom Convoy was to capture the attention of millions of people in Canada and around the globe — mission accomplished,” Angus Reid said. “If, however, the goal was to build support for their demands to end pandemic-related restrictions — it has backfired utterly.”

Ottawa’s chief of police, Peter Sloly, resigned this week amid criticism that the police and Mr. Trudeau’s government have been ineffectual and sluggish in stemming the disruptions.

While trucks continue to hobble traffic and disrupt daily life in Ottawa, there have been signs in recent days that the protests and blockades appear to be slowly diminishing.

Marco Mendicino, the minister of public safety, said Wednesday that three of the main border crossings previously impeded by protesters — in Coutts, Alberta; Surrey, British Columbia; and the Ambassador Bridge linking Windsor, Ontario, to Detroit — were now open. The Ambassador Bridge is a vital supply route for the global automobile industry. On Wednesday, the R.C.M.P. said the border blockade at Emerson, in the province of Manitoba, had been cleared too.

“For those thinking of coming to Ottawa this weekend, don’t,” Mr. Mendicino said, warning that people who did so would be risking involvement in criminal actions.