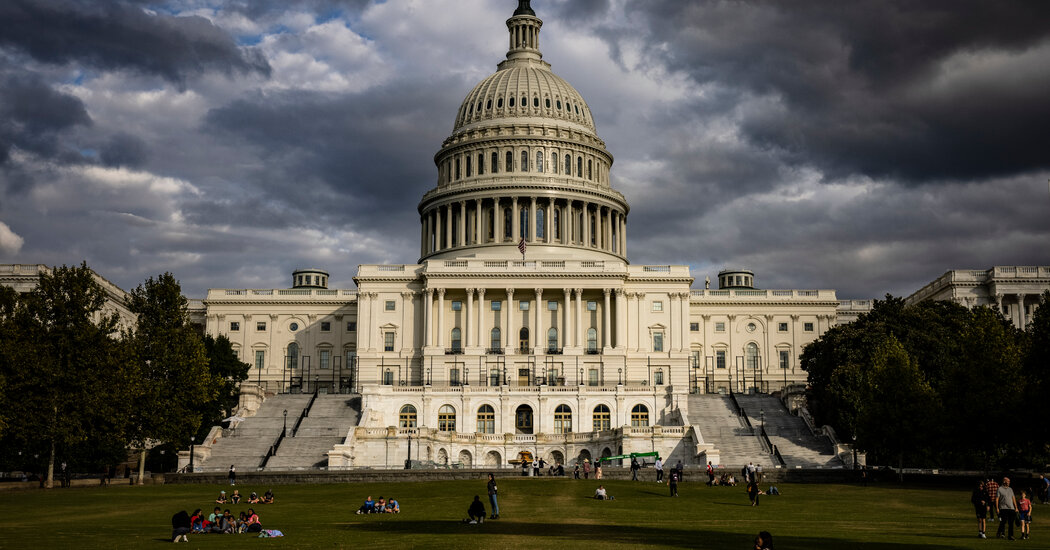 Prices are rising at the fastest rate in four decades, a painful development that has given Republicans a powerful talking point just months ahead of the midterm elections. With control of Congress very much in play, Republicans are investing heavily in a blitz of campaign advertisements that portray a dark sense of economic disarray as they seek to make inflation a political albatross for President Biden and Democrats.

According to Kantar’s Campaign Media Analysis Group, candidates running in House, Senate and governor races around the country have spent nearly $22 million airing about 130,000 local and national television ads that mention inflation from early April through the beginning of July. Inflation was the 10th most common issue mentioned by Democrats and 11th most common for Republicans, according to the data, underscoring how critical the issue is to both parties this election cycle.

The data released Wednesday showing that prices in June climbed 9.1 percent over the past year gave Republicans fresh ammunition against Mr. Biden and his party, ammunition that includes faulting Democrats for passing a $1.9 trillion stimulus package last year and efforts to push through additional spending in a sweeping climate and economic package known as “Build Back Better.”

The intensifying focus on inflation is already weighing on Mr. Biden’s poll numbers. A New York Times/Siena College poll this week showed his approval at a meager 33 percent, with 20 percent of voters viewing jobs and the economy as the most important problem facing the country. Inflation and the cost of living followed closely behind. The poll also showed that the race for control of Congress is surprisingly tight.

While gas prices have fallen from their $5 a gallon peak and there are signs that inflation might be slowing, consumers are unlikely to feel better off anytime soon. Gas prices are still much higher than they were a year ago, with the average national price for a gallon at $4.60 versus $3.15 in 2021, according to AAA.

“It’s a very negative thing politically for the Democrats,” said Jason Furman, an economist at Harvard University and former Obama administration economic adviser. “My guess is that the negative views about inflation are so deeply baked in that nothing can change in the next few months to change them.”

The White House, while acknowledging the pain that inflation is causing, has tried to deflect responsibility, saying that it is a global problem and attributing it to shortages of food and oil stemming from Russian President Vladimir V. Putin’s invasion of Ukraine.

On Wednesday, Mr. Biden called the latest Consumer Price Index “out-of-date” given the recent fall in gas prices and said the data “is a reminder that all major economies are battling this Covid-related challenge, made worse by Putin’s unconscionable aggression.”

8 Signs That the Economy Is Losing Steam

Worrying outlook. Amid persistently high inflation, rising consumer prices and declining spending, the American economy is showing clear signs of slowing down, fueling concerns about a potential recession. Here are other eight measures signaling trouble ahead:

Consumer confidence. In June, the University of Michigan’s survey of consumer sentiment hit its lowest level in its 70-year history, with nearly half of respondents saying inflation is eroding their standard of living.

The housing market. Demand for real estate has decreased, and construction of new homes is slowing. These trends could continue as interest rates rise, and real estate companies, including Compass and Redfin, have laid off employees in anticipation of a downturn in the housing market.

Copper. A commodity seen by analysts as a measure of sentiment about the global economy — because of its widespread use in buildings, cars and other products — copper is down more than 20 percent since January, hitting a 17-month low on July 1.

Oil. Crude prices are up this year, in part because of supply constraints resulting from Russia’s invasion of Ukraine, but they have recently started to waver as investors worry about growth.

The bond market. Long-term interest rates in government bonds have fallen below short-term rates, an unusual occurrence that traders call a yield-curve inversion. It suggests that bond investors are expecting an economic slowdown.

However, Treasury Secretary Janet L. Yellen has acknowledged that the pandemic aid package contributed to inflation by spurring demand in the economy. Last month, she admitted that she was “wrong” to describe price increases as “transitory.”

Republicans have latched on to that as proof that Democrats and the Biden administration misled voters and mishandled the economy and to claim — despite a strong labor market and other signs of economic health — that the nation is on the verge of economic collapse.

An ad funded by One Nation, a nonprofit group aligned with Senate Minority Leader Mitch McConnell of Kentucky, links rising prices to the $1.9 trillion American Rescue Plan that Democrats passed last year. The ad is aimed at Senator Mark Kelly, Democrat of Arizona, and describes him as the “deciding vote” for the bill that passed the Senate 50 to 49 with no Republican support. A gravelly voice reminds viewers that some of the money went to finance ski slopes, golf courses and a luxury hotel.

“Their spending spree worsened inflation,” the narrator said as images of a gas station and grocery store flashed across the screen.

Clips of empty food shelves and a gas station pump meter ticking higher are the backdrop for an ad supporting Ohio Gov. Mike DeWine, a Republican. The TV ad opens with a pointed critique of the president’s handling of the economy: “Joe Biden’s inflation is crushing Americans.”

The National Republican Congressional Committee highlighted the soaring sticker prices of hamburgers, buns, propane and gasoline in an ad assailing Representative Dina Titus, a Nevada Democrat, who is running against Mark Robertson, a Republican who is an Army veteran and a business owner.

“Democrats’ harmful economic policies are making everything more expensive, and there’s no end in sight,” the narrator said as images of Ms. Titus and Mr. Biden appeared before a backdrop of $100 bills.

Republicans are not the only ones talking about inflation on the trail. Democrats are on the defensive, acknowledging the sting of rising prices and pledging to combat them.

Tim Ryan, a Democrat running for Senate in Ohio, makes no mention of Mr. Biden in a campaign ad filmed at a basketball arena. He insists that inflation is not a political matter and calls for improving American supply chains through re-shoring, being tough on China and cutting taxes.

“Who here is tired of getting hammered by inflation?” Mr. Ryan asked. “We’ve got to get serious about lowering costs and actually helping people.”

The Federal Reserve has been raising interest rates aggressively to tame inflation, which has been fueled by surging demand, supply chain disruptions and higher energy costs resulting from Russia’s war in Ukraine. The Fed’s focus on trying to slow the economy by raising borrowing costs has heightened fears that the country could tip into a recession.

There are signs that inflation concerns and recession fears are deepening. The National Federation of Independent Business said this week that optimism among small companies about economic conditions over the next six months fell to a record low in June amid worries about inflation, labor shortages and the prospect of tax increases.

Some economists have expressed concern that the political debate could actually make it harder for the central bank to orchestrate a so-called soft landing — in which it cools the economy without causing a recession — if the proliferation of campaign ads fan fears of inflation.

If inflation concerns become even more heightened and consumers begin expecting prices to keep rising, that could compel workers to ask their bosses for bigger raises in anticipation of goods and services becoming more costly. Those employers could then raise the costs of the goods and services they sell in order to cover their higher labor costs.

“The concern that I have is that you get inflationary expectations embedded in the economy and that leads to the wage-price spiral that we saw in the 70s,” said Dean Baker, senior economist at the Center for Economic and Policy Research. “It becomes self-perpetuating.”

Mr. Baker added that such a wage-price spiral is unlikely because wage growth has been slowing, but that it is possible that the Fed could make unnecessary interest rate hikes because of the hysteria surrounding inflation.

Goldman Sachs economists, in a research note last month, pointed to studies that found inflation expectations, which are a key indicator of rising prices, are sensitive to new information such as political ads.

“Fed officials might feel compelled to respond forcefully to even moderate further increases in long-run inflation expectations,” they wrote. “As a result, we see the upcoming onslaught of inflation-focused political advertisements as adding to the risk that the Fed could continue to tighten aggressively even if economic activity decelerates sharply.”

The notion that the United States could essentially talk itself into a recession is not new. As recently as 2019, before the pandemic, markets were roiled by former President Donald J. Trump’s trade war with China and consumer sentiment started to dip. Mr. Trump accused his critics and the media of “doing everything they can to crash the economy because they think that will be bad for me and my re-election.”

Mr. Furman pointed out that economic sentiment can often diverge along party lines depending on what party is in power, but that it is uncertain to what extent those feelings will influence hiring and investment plans.

“Republicans became much more pessimistic about the economy after Biden was elected,” he said.

Beyond campaign ads, the sense of economic doom is being amplified by right-leaning media outlets, which consistently tie inflation to Mr. Biden’s policies.

Monica Crowley, a conservative commentator who appears regularly on Fox News, said that inflation was a regular topic during her appearances and on her podcast. She argues that the jump in prices coincided directly with the passage of the pandemic relief package last year and predicts that Democrats will pay the price for inflation because it is harming their low-income and working class base the hardest.

“This is not some obscure fiscal or monetary issue that the American people might have some issue understanding,” Ms. Crowley, a former senior Treasury Department official during the Trump administration, said. “Inflation affects everybody. The political fallout for the Democrats is going to be very significant.”

The Biden administration has argued that the focus on inflation has in some cases been unfair.

Jared Bernstein, a member of the White House’s Council of Economic Advisers, dismissed the notion that Mr. Biden was facing “Jimmy Carter déjà vu” in terms of inflation and suggested in an interview with Fox News that the network was trying to cast the data in the most negative light.

“You like to focus on the headwinds,” Mr. Bernstein said to Neil Cavuto of Fox on Wednesday. “And I get it — if it bleeds, it leads.”