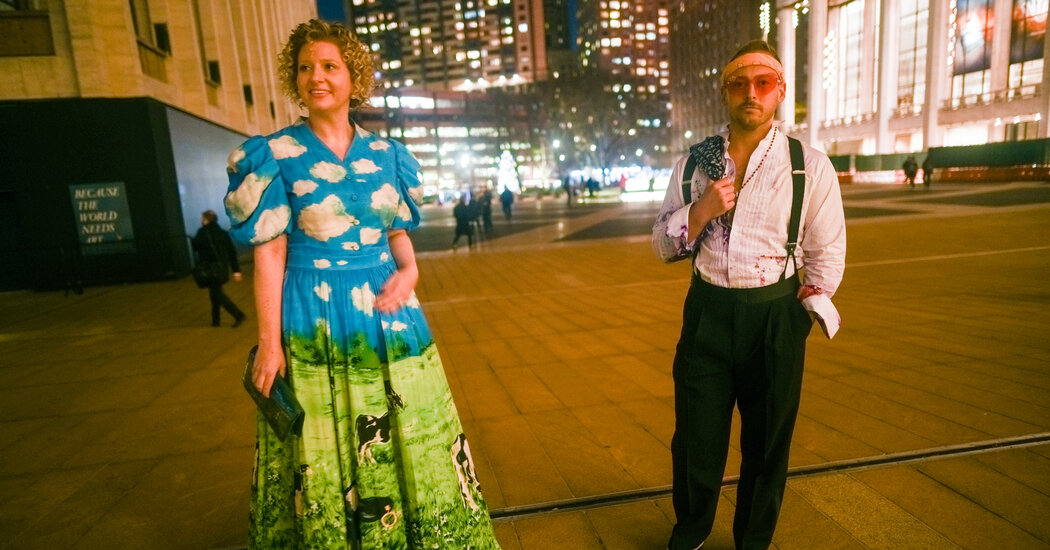 After Midtown was officially deemed cool again and espresso martinis made a comeback, it was only a matter of time before New York’s young tastemakers — the people who have mined the city’s cultural history for inspiration and defined its present on their own terms — found their way to the Metropolitan Opera.

As Lincoln Center welcomed ticket holders back to its theaters this fall after a year-and-a-half-long hiatus, the storied institution’s plaza and seats were soon filled with stylish patrons in their 20s and 30s — many of them there for the very first time.

A Friday performance this month of Mozart’s “The Magic Flute” drew a crowd that included dozens of attendees not yet old enough to rent a car.

“I’m usually dressed better,” said Patience Opaola, 23, who was taking a selfie by the fountain with her 17-year-old sister, Precious. It was Ms. Opaola’s fifth show since September; before then she had never seen a single opera. Her favorite so far? Giacomo Puccini’s “La Bohème,” which she described as “the grandfather of ‘Rent.’”

Ms. Opaola noted that the institution’s Fridays Under 40 program, which offers cheaper tickets to younger patrons, had been part of the draw. “I definitely think that the accessibility of the ticket makes a big difference,” she said. Her seats weren’t great, she conceded, “but, I mean, it’s just $40!”

From Lil Nas X to Mozart to Esperanza Spalding here is what we loved listening to this year.

Jim Valcourt, 31, was also tempted by the newly discounted tickets. For him, the show was an occasion to dress up (he was suited in a tuxedo he last wore at his wedding a few years ago) and to see another side of New York.

“It’s beyond the realm of what I’d normally be doing,” Mr. Valcourt said. “But I’m moving out of the city and want to experience everything I never had a chance to when I was younger.”

For many people, the Covid-19 pandemic brought about a new awareness of not only one’s personal mortality but also the mortality of one’s personal New York City: a favorite bagel shop, a beloved bar, the corner bodega. The city’s shutdown caused thousands of businesses to shutter permanently; it also caused some of its greatest arts institutions to pause their programs indefinitely.

Now that cultural institutions such as Lincoln Center have reopened their doors, a younger crowd is taking advantage of its offerings. Over the weekend, a TikTok user posted a video of herself leaving the Met Opera, visibly dazzled. “If you’re at the opera and you’re under 35 years old,” she says in the video, people look at you like you’re a “movie star.”

“I feel like a million bucks,” she says before the video ends.

For most, the ritual of going uptown, getting dressed up and observing the preshow spectacle — people guzzling Champagne on the plaza and posing for group shots in front of the fountain — takes precedence over the actual performance. Coen Kleinesgris, Aleza Raheed and Nathalie Balabhadra were all blushed at the top of the line to get in, each one’s coat more showy than the last.

“It’s a very Christmas-y thing to do. It’s fun to have a gown night and get to wear something floor-length,” said Ms. Raheed, 23.

She noted that she had not seen an opera performance since high school. “And that was like five hours long,” she said. “This one is in English, so I think it’ll be a bit easier to understand. Really, I just want to be entertained.”

Some found that it wasn’t even necessary to enter the building to have a good time. Melissa Shaw, 27, was sitting by the fountain with her boyfriend, watching ticket holders process in and out. The couple was visiting New York from Britain, and Ms. Shaw insisted on seeing Lincoln Center after watching the “Center Stage” movies.

“It exceeds my expectations,” Ms. Shaw said, looking at the space from the plaza. “I was anticipating just a boring building, but it’s really lovely all lit up.”

Amy Burton, a soprano who has sung with the Met Opera and teaches voice classes at Juilliard and the New School, noted that opera has shifted in the last two decades.

“There’s much more emphasis on the visual,” she said. “Back in the golden age of opera, not that much attention was paid to the sets, and now design is such an important element of it.” For a generation that trades in images, the over-the-top visuals may be part of the appeal.

It seems, too, that a new generation of singers is taking to the form. Ms. Burton said that applications to Juilliard increased during the pandemic — a point the school corroborated. “People think that opera and classical music are a dying art,” she said. “But there’s no shortage of applicants who want to do this.”

The young audience members who had come to see “The Magic Flute” didn’t boast any expertise in opera. Instead, they seemed to mostly be along for the ride.

“I think you have to be really open to it, but really it’s art,” said Josephine Thill, 23, a first-time Met Opera attendee. “I don’t really think there’s something to get. That’s the beauty of it — it’s to enjoy.”