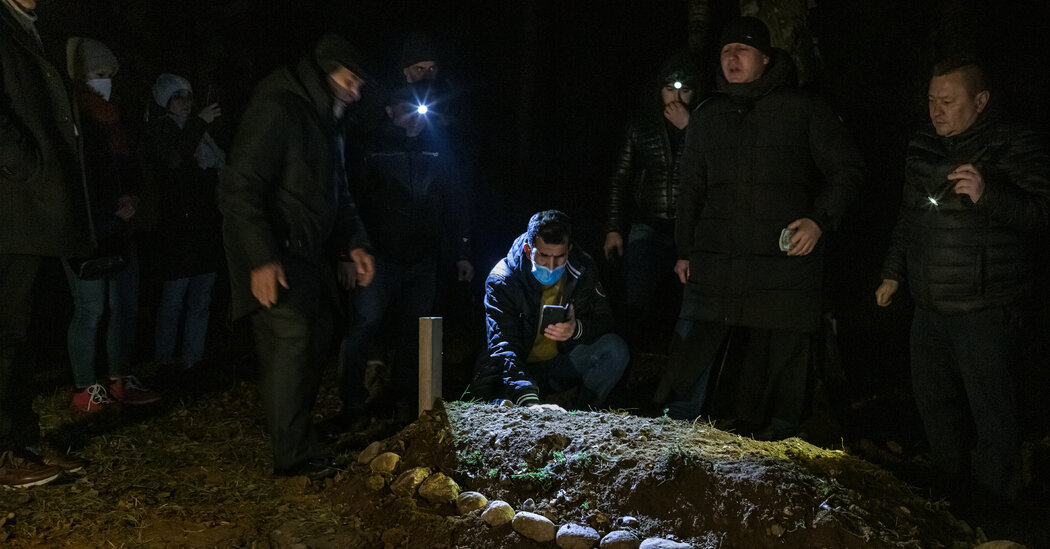 SOKOLKA, Poland — A few miles from here, in the small Polish town of Bohoniki, a young Syrian, Ahmed Al Hasan, was buried Monday. The 19-year-old man died in late October in a river in this freezing, forested buffer zone where thousands of migrants and asylum seekers have been sent by the Belarus government to try to break through into Poland and the European Union.

As the funeral proceeded in Bohoniki, Belarusian forces were massing large groups of migrants and encouraging them to force their way across the Polish border at Kuznica-Bruzgi, a 15-minute drive to the northeast. There, Polish troops and police officers were deployed in long lines to defend the border, which is festooned with large spirals of razor wire.

In Brussels, European Union foreign ministers adopted new sanctions on the government of Aleksandr G. Lukashenko, the Belarus leader, who has already been sanctioned for fraud in claiming a sweeping re-election victory in August and for a subsequent harsh suppression of dissent.

The new sanctions, approved by European governments on Monday, would target “individuals and entities organizing or contributing to activities by the Lukashenko regime that facilitate illegal crossing of the E.U.’s external borders,” according to the European Commission, the bloc’s executive bureaucracy.

A list of those to be hit by asset freezes and travel bans under the new sanctions is expected to be finalized in coming days. Likely to be targeted are more than two dozen Belarusian officials; a Syrian airline, Cham Wings, for having transported migrants to Belarus; the Hotel Minsk in the Belarus capital, for housing migrants; and possibly Minsk airport, according to E.U. officials.

“Today’s decision reflects the determination by the European Union to stand up to the instrumentalization of migrants for political purposes,” said the E.U. foreign policy chief, Josep Borrell Fontelles. “We are pushing back on this inhuman and illegal practice.”

The European Union has called Mr. Lukashenko’s efforts “a hybrid attack,” saying that he has encouraged migrants to fly into Belarus from countries like Syria and Iraq with the express purpose of sending them on to the European Union in retaliation for the earlier sanctions.

The new sanctions will have to undergo legal vetting by the European Commission before being implemented and coordinated with Britain, Canada and the United States, which could take several weeks.

The growing numbers of migrants at the Kuznica-Bruzgi border crossing on Monday, which has raised fears of further tragedy and confrontation between the two governments, appeared to be a response by Mr. Lukashenko to the meeting of the E.U. foreign ministers. Mr. Lukashenko has vowed to retaliate against fresh sanctions, though his main supporter, President Vladimir V. Putin of Russia, has chastised him for threatening to cut off supplies of the Russian natural gas that flows through his country to Europe.

Mr. Lukashenko was mistaken and speaking in anger, Mr. Putin said, while underlining that Russia would strictly respect its gas contracts with Europe — a key message as he tries to get final approval to use the controversial Nord Stream 2 gas pipeline that goes directly to Germany and thus bypasses Belarus, Poland and Ukraine.

As the E.U. ministers weighted the new sanctions, the situation on the border appeared to be deteriorating.

A video sent to The New York Times by Nishan Abdulqadr Mustafa, a 25-year-old Kurd from Iraq who is on the Belarusian side of the border, showed hundreds of migrants stranded outside the checkpoint at Kuznica-Bruzgi. “We are going to Poland,” he said. “It is just too cold, we cannot take it anymore.”

Poland and Lithuania, which have seen a surge in migrants trying to cross to Belarus, have declared states of emergency and closed border areas to journalists and aid workers, although some Polish aid groups have been working to help those caught in the freezing conditions between Belarusian and Polish forces.

Mr. Lukashenko, however, has allowed the media to roam his side of the border, to highlight the misery of the migrants and asylum seekers and to try to deflect blame for the crisis from his own government onto a European Union that refuses to open its borders.

The stories of those trapped in the border zone have been heartbreaking.

Mr. Hasan, the 19-year-old, who was from Homs, in Syria, was found in the river in late October near Bohoniki, the historic home of Poland’s Muslim Tatar minority, where there is a mosque, and an imam able to conduct the funeral services for him.

Fida al-Hasan, a Syrian doctor who lives in the nearby town of Bialystok, came to the funeral with his father, who was visiting from Canada. “I came to Bohoniki mosque to pray,” Mr. Al-Hasan said. “We came here today because it is our duty to pray for the soul of this boy. He has no family here.”

Two Syrians found late Sunday by aid workers, and seen by The New York Times, had been stranded in the forest straddling the Polish-Belarusian border for days and were in an advanced stage of hypothermia. With their faces half-frozen and their lips blue from the cold, they were barely able to utter a word to the aid workers who found them.

“They had been in the forest for at least four days,” said Agata Kolodziej from Fundacja Ocalenie, a Polish charity that has been helping migrants since September. “They only told us their names, we don’t know anything more.”

The brothers, Layous, 41 and Khedr, 39, were from the city of Homs in Syria. A medical worker helped to carry the brothers to an ambulance parked on the edge of an unlit road next to Orla, Poland, around 15 miles from the border, the aid workers said.

The activists at the border said they had been receiving several messages a day from desperate migrants over the past two months. But since last week, their phones have gone largely silent. The Syrian brothers were one of the few that reached out for help after getting the numbers of the activists, which have been circulating widely among migrants on the border.

Instead, the only sign of migrants managing to cross the border, passing through one of Europe’s oldest and densest forests, are objects that aid workers and residents have found on daily patrols: a backpack filled with documents and passport pictures; an empty tuna can with a Belarusian label; a Cham Wings boarding pass for a flight between Damascus and Minsk; an ophthalmologist prescription written in Arabic.

But otherwise the aid workers say they have seen few signs of actual migrants.

Since the migration crisis of 2015, at the height of the Syrian war, when more than a million migrants and asylum seekers tried entering Europe, the Europeans have tightened their border controls and declared that uncontrolled migration is no longer possible. That has resulted in ugly scenes in places from Greece and Italy to Hungary and now Poland and Lithuania, as migrants try to enter the European Union.

European officials insist, however, that, unlike past crises, the scenes on the border between Belarus and Poland are not because of migrant issues, but are the result of a form of warfare by Mr. Lukashenko.

Mr. Lukashenko, speaking to state media on Monday, denied orchestrating the current crisis and dismissed the threat of fresh sanctions. “We will defend ourselves. That’s it, there’s nowhere to retreat further,” he was quoted as saying by the state news agency, Belta.

Brussels has already succeeded in getting some airlines, including Turkish Airlines and Belavia, the Belarusian state airline, to agree to prevent migrants from flying to Minsk. Officials hope that restricted travel coupled with tough measures on the border will dissuade others in the Middle East from trying the new route to Europe through Belarus.