F.D.A. Plans to Allow 12- to 15-Year-Olds to Receive Pfizer Boosters 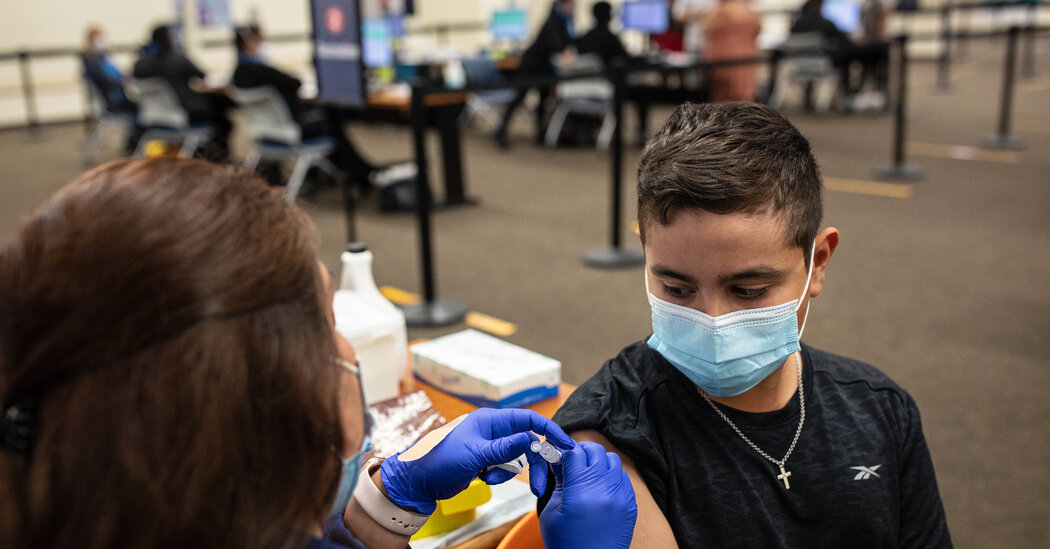 WASHINGTON — The Food and Drug Administration is planning to broaden eligibility for coronavirus vaccine booster doses on Monday, allowing 12- to 15-year-olds to receive third doses of Pfizer-BioNTech’s vaccine, according to people familiar with the agency’s deliberations.

Regulators also plan to allow both adolescents and adults to seek an extra shot of Pfizer’s vaccine five months after receiving a second dose, instead of the current period of six months. A booster shot is also expected to be authorized for younger children, ages 5 to 11, with immune deficiencies.

The Centers for Disease Control and Prevention’s vaccine advisory committee is planning to meet by the middle of next week to vote on whether to recommend the changes. If the committee agrees with the F.D.A.’s authorizations, Dr. Rochelle P. Walensky, the C.D.C. director, is expected to promptly endorse the revisions.

The move to expand boosters comes as the highly contagious Omicron variant is infecting a record number of Americans with the coronavirus, putting more pressure on hospitals already deluged by Covid-19 patients from the Delta variant.

More than 70 percent of people 12 years and older in the United States are fully vaccinated, according to the C.D.C. Children can better withstand coronavirus infections, but in rare instances still become very sick and even die. At least 1.8 million adolescents between 12 and 15 years old have tested positive for the virus, according to the C.D.C.

The F.D.A. had hoped to announce its decision as early as Thursday, the people familiar with the deliberations said, but agreed to wait until Monday because Dr. Walensky said she wanted to hear recommendations from her agency’s outside advisory group before signing off on the changes. That group, which has met throughout the pandemic to consider F.D.A. decisions around vaccines, might not meet until Wednesday.

The two agencies share responsibility for setting the nation’s vaccine policy and have worked to present a unified front in their reviews of booster shots. But the F.D.A. has been more willing to act without the advice of its outside advisory committee, with some top officials arguing that the agency needs to respond as quickly as possible in the face of the ongoing public health crisis.

Federal regulators based their decision at least in part on data from Israel that showed no serious safety concerns in thousands of 12- to 15-year-olds who received a third dose of the Pfizer vaccine. There were no reports of myocarditis, a rare side effect seen mostly in younger men that has been linked to the Pfizer and Moderna vaccines. The condition involves inflammation of the heart muscle.

The F.D.A. wants to allow a booster dose as early as five months after the second Pfizer dose in part because Israeli data suggests that the shorter interval is effective, according to people familiar with the government’s deliberations.

One recent South African study showed that the effectiveness of Pfizer’s vaccine against severe illness and hospitalization was about 70 percent after two doses.

The U.S. surge The U.S. record for daily coronavirus cases has been broken, as two highly contagious variants — Delta and Omicron — have spread across the country. The seven-day average of U.S. cases topped 267,000 on Tuesday, according to a New York Times database.

New C.D.C. guidelines Hoping to prevent further disruptions to daily life, the C.D.C. reduced the period that certain infected Americans must sequester to five days from 10. This change applies only to those without symptoms, or those without fevers whose other symptoms are improving.

Pfizer and BioNTech, its German partner, have both said their studies show that a third dose is needed to protect against Omicron. Dr. Albert Bourla, the chief executive officer of Pfizer, said this month that while two doses may still prevent severe disease from Omicron, a third strengthens protection.

Dr. Ugur Sahin, the chief executive of BioNTech, said three doses “could still offer a sufficient level of protection from disease of any severity” caused by the variant.

Although the F.D.A. convened its outside advisory committee repeatedly earlier this year, it has not asked the committee for recommendations before its most recent decisions to expand boosters.

Dr. Walensky this month endorsed offering Pfizer-BioNTech booster shots to 16- and 17-year-olds without convening her agency’s expert committee. But she was unwilling to do that for younger adolescents, people familiar with the government’s deliberations said.

Some outside experts have argued that in bypassing the outside committees, the C.D.C. and F.D.A. were wrongly limiting public discussion about the evidence to justify expanding the use of boosters.