F.D.A. Plans to Authorize Pfizer Boosters for All Adults This Week 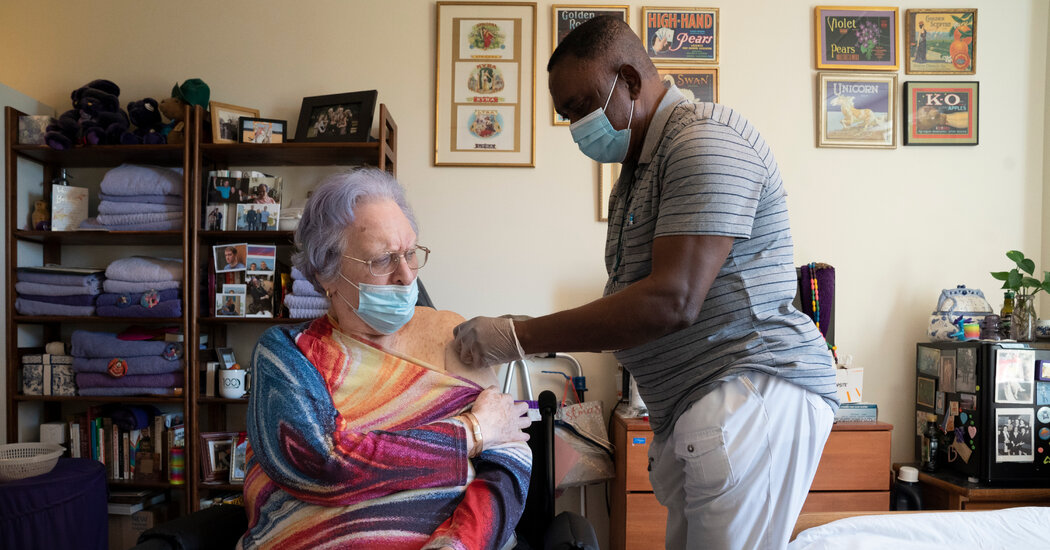 WASHINGTON — The Food and Drug Administration is aiming to authorize booster doses of Pfizer-BioNTech’s coronavirus vaccine for all adults as early as Thursday, a move that would expand the number of Americans eligible for additional shots by tens of millions, according to people familiar with the agency’s plans.

The Centers for Disease Control and Prevention’s independent committee of vaccine experts has scheduled a meeting for Friday to discuss data on the booster dose’s efficacy and safety. If both the F.D.A. and the C.D.C. sign off this week, they will have acted strikingly quickly — a little more than a week after Pfizer asked for authorization of boosters for everyone 18 and older.

Under that scenario, any adult who received a second dose of the vaccine at least six months earlier would be officially eligible to get a booster as soon as this weekend. The F.D.A. is expected to rule without consulting its own expert panel, which has met frequently during the pandemic to review vaccine data and make a recommendation ahead of a regulatory decision.

The broad booster authorization has been viewed as something of a fait accompli for weeks. Some state and local officials have begun rolling out similar policies ahead of F.D.A. action — responding to persistent virus case counts, including some breakthrough cases, and the eagerness of many Americans to seek additional protection ahead of holiday gatherings.

New York City health officials on Monday encouraged all adults who want boosters to seek them out. Arkansas, California, Colorado and New Mexico have also moved to expand access.

Many Americans, regardless of where they live, have taken the matter into their own hands and sought out extra doses even if they did not yet officially qualify.

The F.D.A. in September downsized an initial request from Pfizer-BioNTech’s to fully approve booster doses for all adults. Instead, it made a more limited population eligible, including those 65 and older, as well as adults with underlying medical conditions or those at risk because of their jobs.

At least 30 to 40 percent of vaccinated adults are still excluded from booster eligibility, according to some estimates.

More than 30 million people have already gotten additional shots, with the daily number often outpacing that of first shots given around the country. Booster doses were also authorized in October for everyone who received the single-dose Johnson & Johnson vaccine, and for vulnerable groups who received Moderna’s two-dose shot.

The C.D.C.’s gathering on Friday is scheduled to be briefer than recent meetings about Covid vaccines — just three hours. It is expected to be straightforward, one federal official familiar with the planning said, in part because of how far the nation’s booster campaign has already come. That would suggest a significant softening of opposition among public health experts since President Biden announced in August that he hoped to offer booster doses to all adults.

Mr. Biden wanted to start the campaign in late September, but his announcement was heavily criticized by public health experts, who said he was rushing the federal scientists and regulators responsible for deciding whether the data supported such a move.

Some key regulators and outside advisers had argued that the effectiveness of the two-dose regimen, especially in preventing hospitalization and death, has held up strongly. One large study in New York of nearly nine million people has shown remarkable durability in the protection gained from all three federally authorized vaccines.

But more recently, some federal regulators and scientists have said the evidence is increasingly clear that a reduction in vaccine efficacy against milder Covid cases, and in protective antibodies, has put Americans — especially seniors and those with medical conditions — at risk of harmful breakthrough infections as the Delta variant of the virus only gradually loosens its grip.

Pfizer and BioNTech said last week that their request is based on data from a clinical trial in the United States and elsewhere that included more than 10,000 volunteers. After a third dose, the vaccine’s efficacy rate against symptomatic disease had been restored to about 95 percent, they said. It remains unclear, however, how long the protection from a booster shot will last.

Moderna is expected to soon submit its own request for the F.D.A. to broaden eligibility for its booster. But for now, every adult can get the Pfizer booster if it is broadly authorized, according to people familiar with the planning.

Top federal health officials, including Dr. Anthony S. Fauci, have argued for months — often pointing to Israel, which started its booster campaign in late July and now offers extra shots to everyone 12 and older — that the case for boosting widely in the United States is clear. Dr. Fauci said at an event sponsored by Reuters on Tuesday that the virus could potentially be brought under control in the U.S. by the spring if boosters were available for everyone.

Vaccine experts have said that antibody protection is just one measure of how a vaccine confers protection, and that in the case of Covid vaccines, it was always expected to fade. Some have warned that keeping antibody levels high would possibly require regular booster shots — a standard that would be difficult to sustain.

What to Know About Covid Vaccines and Boosters

Getting first doses to the unvaccinated, who are driving transmission of the virus, is more important than boosting, experts have said.

While the F.D.A.’s expert committee is not expected to weigh in before the agency’s ruling, several members said last month at a meeting discussing booster shots that the agency should go ahead and lower the age eligibility.

An Israeli study published in the scientific journal The Lancet in late October compared about 730,000 people who had received a booster dose in August or September with individuals who had received only two doses of the Pfizer-BioNTech vaccine at least five months earlier, finding that boosted recipients had a lower risk of hospitalization and severe disease.

Israeli officials reported at an F.D.A. meeting last month that third doses had not caused any significant safety concerns, a finding that Pfizer was expected to present to the F.D.A. in its request to expand eligibility. Friday’s meeting of the C.D.C. panel will likely examine data the company provides on side effects. Regulators have been particularly concerned about links between the Pfizer-BioNTech and Moderna vaccines and myocarditis, inflammation of the heart muscle, which has been observed especially in younger men who received two doses of those vaccines.

A. Oveta Fuller, an associate professor of microbiology and immunology at the University of Michigan and a member of the F.D.A. committee, said that while she was at first skeptical about clearing booster shots for so many adults based heavily on data from Israel, she was more convinced now that millions of Americans have received the extra shots.

“Caution is always better,” she said. Clearing more adults to get boosters, she added, would help make the messaging around booster shots more manageable.

Dr. Ofer Levy, director of the Precision Vaccines Program at Harvard’s Boston Children’s Hospital and a member of the F.D.A. advisory committee, said that the American booster campaign thus far had been “helter-skelter.”