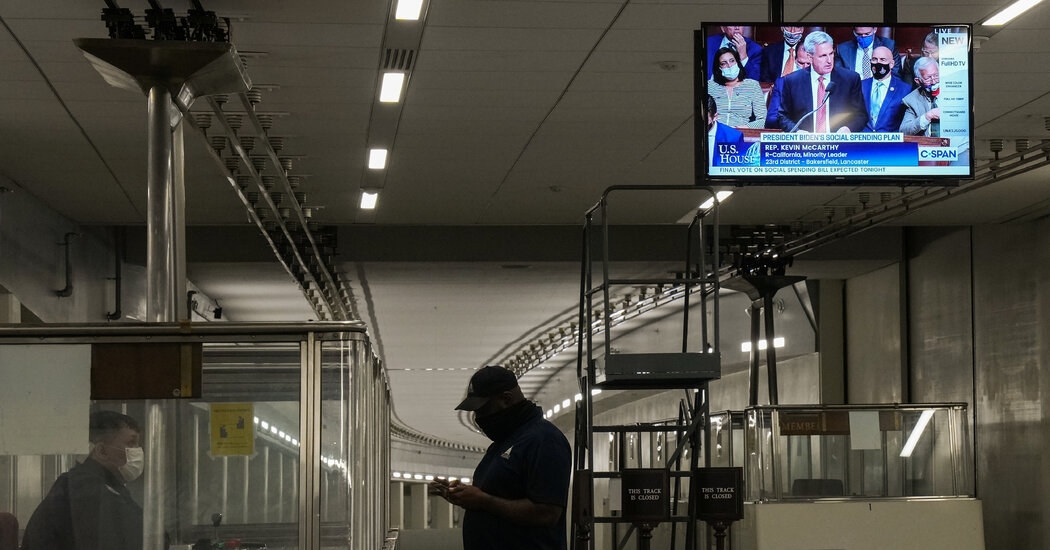 Representative Kevin McCarthy, Republican of California and the minority leader, mounted his case against President Biden’s social spending bill in a record-breaking speech that stretched for more than eight hours from Thursday to Friday.

Here’s a fact check of some of his remarks.

“Just a few weeks ago, Congresswoman Abigail Spanberger said nobody elected Joe Biden to be F.D.R. This even spends more than F.D.R. while he was fighting a world war.”

This is misleading. Spending and tax cuts in the bill will add up to about $2 trillion over 10 years, and could snowball into $4 trillion if shortened programs are extended.

That is indeed a larger dollar amount than the New Deal programs passed under President Franklin D. Roosevelt, which cost about $800 billion after adjusting for inflation, according to a report from the Federal Reserve Bank of St. Louis. But World War II itself cost about $5 trillion.

Moreover, comparing New Deal programs with the social spending bill should account for the changes in the United States’ economy and population size. The report from the Federal Reserve Bank of St. Louis also noted that the cost of the New Deal amounted to 40 percent of annual gross domestic product.

In comparison, the $1.9 trillion stimulus package that Mr. Biden signed into law in March and his initial proposal for a $4 trillion economic plan — which became the whittled-down infrastructure measure and the social spending bill — together would amount to 28 percent of G.D.P.

This is misleading. The bill provides the I.R.S. with $80 billion in additional funding, including nearly $45 billion for enforcement. The Congressional Budget Office noted in September that the proposal would result in increased audit rates for everyone, with high-income earners facing the largest increase.

The bill does not contain any specifics directing how audits would be spread among taxpayers of different incomes, and the Biden administration and Republicans disagree on how it would play out.

The Treasury Department said in a May report about the proposal that tax audit rates would not rise for those earning less than $400,000 since the “compliance proposals are designed to ameliorate existing inequities by focusing on high-end evasion.”

A spokeswoman for Mr. McCarthy pointed to calculations from Republicans on the House Ways and Means Committee that compared historical audit data.

In the past decade, tax audit rates have fallen for higher-income earners and have stayed relatively stable for lower-income earners, which the Treasury Department attributed to the I.R.S.’s diminished resources and inability to retain specialized auditors needed to examine the filings of the wealthy.

The Congressional Budget Office estimated that the bill would return enforcement to its 2010 levels. Doing so would indeed result in about 1.2 million more audits, and about 580,000 of those would affect people making less than $75,000.

But that is because a vast majority of tax filers — about 70 percent — make under that threshold. Looking at what fraction of returns are examined by income group, rather than the sheer number, shows that wealthier taxpayers would have a better chance of being audited than lower-income earners under the Democrats’ proposal.

This is misleading. This was a reference to a proposal by the Treasury Department requiring banks to report aggregate annual flows of $10,000 or more in customer accounts to better tackle tax evasion. (A previous version of the proposal suggested monitoring flows of $600.) Wages and federal benefits are exempt from the reporting requirement, and banks will not report individual transactions. But this proposal did not make its way into the social spending bill.

In a fact sheet, the Treasury Department said it was a “misconception” that all Americans would face greater scrutiny under the proposal.

Michelle Nessa, an accounting professor at Michigan State University and expert on tax audits, said that the bank reporting requirement was “unlikely to meaningfully increase audit risk for most people.”

False. The Democrats’ bill would increase tax credits for electric vehicles to $12,500 from $7,500 if the car is made in the United States with union labor and if its battery is also produced domestically. The credits cover sedans that cost up to $55,000 and zero-emission vans, SUVs and trucks that cost up to $80,000, so the Tesla Model 3, which starts in the mid-$40,000s, would qualify.

But the hypothetical almost-millionaire in Mr. McCarthy’s example would not qualify, as only individuals making $250,000 or less (and joint filers making $500,000 or less) can claim the credits under the bill.

“More than one million people who lost their job after President Biden was sworn in because he shut down a pipeline. ”

False. Early in his presidency, Mr. Biden rescinded the construction permit for the Keystone XL oil pipeline, and the company behind the project terminated it altogether in June. Mr. McCarthy wildly exaggerated the pipeline’s effect on employment.

The company itself has estimated that the pipeline would employ about 11,000 Americans. The State Department, in a 2014 report, estimated that it would support about 42,000 temporary jobs during two years of construction and 35 permanent employees after the initial phase.

Mr. McCarthy may have been referring to a 2020 analysis from the American Petroleum Institute, the oil and gas industry’s biggest trade group, that estimated that nearly one million jobs would be lost by 2022 if drilling were banned on federal lands — not from the cancellation of one pipeline.

Mr. Biden banned new oil and gas leases on federal lands but did not rescind existing leases. Moreover, in June, a federal judge blocked the administration’s suspension of new leases. The approval of leases has actually increased under Mr. Biden, as has employment in oil and gas extraction.

“Biden terminated every successful immigration policy put into place by President Trump, triggering the largest wave of illegal immigration in of all history.”

This is exaggerated. Mr. Biden has indeed rescinded many of President Donald J. Trump’s immigration policies, but he also has kept a key policy intact.

While the Biden administration has rescinded the so-called Muslim ban, halted construction of Mr. Trump’s border wall and stopped conducting workplace immigration raids, it is continuing to use a public health rule that allows officials to turn away hundreds of thousands of migrants at the border.

Additionally, the Biden administration tried to end a Trump-era program that forced asylum seekers to wait in Mexico while their applications were being reviewed, but it was ordered to restart the program.

This is misleading. The bill itself does not provide hundreds of thousands of dollars for unauthorized immigrants. Rather, this was a reference to a proposal to provide monetary compensation for damage inflicted by a Trump-era immigration policy.

The American Civil Liberties Union and others have filed lawsuits on behalf of migrant families separated at the border by the Trump administration. About 5,500 children were separated from their parents. The Wall Street Journal reported that the lawsuits seek damages of varying ranges and average $3.4 million per family.

The Biden administration and lawyers for the families have been in negotiations to provide $450,000 for each family member affected, but The New York Times reported that only a minority of families would be eligible as many have not filed complaints against the government.

When asked about the figure this month, Mr. Biden said “that’s not going to happen.” A White House spokeswoman later clarified that the Justice Department had told plaintiffs that the $450,000 figure was “higher than anywhere that a settlement can land.”

“Mr. Speaker, you might remember the Iron Dome. Your party actually defunded that.”

False. Despite some opposition from progressive Democrats to providing funding for Israel’s Iron Dome missile defense system, the House voted 420 to 9 in September to provide $1 billion in new funding. Democrats voted overwhelmingly for the funding.