‘Flee’ Review: From Kabul to Copenhagen 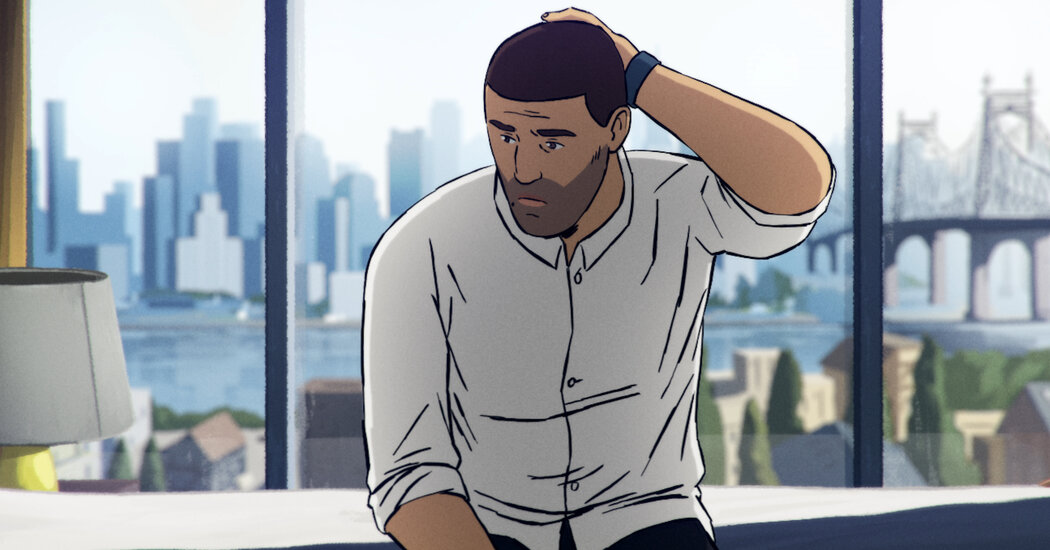 “Home — what does it mean to you?” That’s the question that hovers over “Flee,” Jonas Poher Rasmussen’s piercing animated documentary about a high school friend of his who emigrated from Afghanistan to Denmark as a teenager.

For reasons that become clear in the course of the film, the friend — now a grown man with a solid relationship and a flourishing academic career — is given a pseudonym. He’s called Amin, and the animation adds a further layer of protection. But the voice that tells the story belongs to him, and the story itself is filtered through painful memories that he has kept to himself for a long time.

At the start of the movie, Amin lies on his back with his eyes closed as Rasmussen prepares to film, a setup that suggests a cartoon version of psychoanalysis. And while the narrative moves mostly in a straight line, it also doubles back and encounters obstacles, proceeding into the past by means of association, indirection and the overcoming of repressed knowledge. That creates not only suspense, as we wonder what will happen to Amin and his family, but also a powerful feeling of intimacy. “Flee” may be about a pressing global issue — the plight of refugees displaced by war and other emergencies since at least the 1980s — but it’s also about a specific person’s life.

The first home Amin remembers is in Kabul. As the youngest of five children — their father was a military officer — Amin watched as the Soviet-backed government in Afghanistan gave way to the American-financed Mujahedeen. The conflict is depicted in live-action news footage and also in shadowy, almost abstract black-and-white images. The politics are less important than the confusion and trauma a child experiences as his world unravels. Amin’s father is arrested and his older brother narrowly escapes being conscripted.

Another brother lives in Sweden, and the rest of the family relies on his help once they flee to Moscow. Russia is home for a while, but after 1989 it becomes an increasingly treacherous place, a land of poverty, corruption and brutal weather. Scandinavia seems more promising, but getting there is expensive and dangerous, and requires some agonizing choices.

From the start, we know that Amin made it safely to Copenhagen. His reminiscences are interwoven with scenes from his adult life. He’s about to take up a postdoc at Princeton, and he and his fiancé, Jasper, are thinking about buying a house. “Flee” acknowledges Amin’s good fortune — and offers quiet testimony to the decency and generosity of Danish society — while also reckoning with what it cost him.

Less a sociological case study than a psychological portrait, the film is both probing and tactful. The fact that it arose out of Rasmussen’s friendship with Amin creates a feeling of trust. The director is receptive to Amin’s secrets and aware of the nuances of his personality. As much as “Flee” is a refugee’s tale of flight and eventual settling, it’s also a coming-out story, and as such a complex reflection on different forms of outsiderhood.

To be an immigrant in Denmark and a gay man in Afghanistan are hardly equivalent, but the nuances of both experiences yield some touching, surprising and funny moments. Amin discovers his sexuality via a fascination with the Belgian action star Jean-Claude Van Damme, whom he imagines winking at him from a poster on his bedroom wall in Kabul. Later, Amin experiences a brief, powerful crush on a fellow migrant during one of the legs of his journey.

The animation suffuses “Flee” with a strangeness that a conventional documentary might not possess, and that perhaps mirrors Amin’s own alienation. He isn’t unhappy, but his features seem shrouded in melancholy, a condition Rasmussen addresses with sympathy rather than sentimentality. Luck and loss can’t be disentangled, and that may be the meaning of home that this patient, humane film arrives at.