For Afghan Refugees, a Choice Between Community and Opportunity 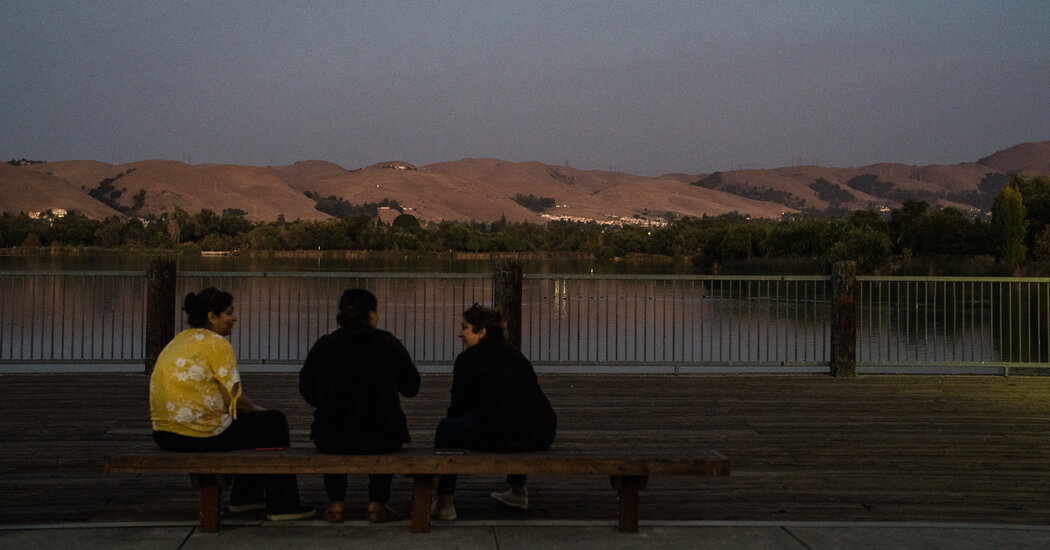 FREMONT, Ca. — Harris Mojadedi’s parents fled Afghanistan’s communist revolution four decades ago and arrived as refugees in this San Francisco suburb in 1986, lured by the unlikely presence of a Farsi-speaking doctor and a single Afghan grocery store.

Over the decades, as more refugees settled in Fremont, the eclectic neighborhood became known as Little Kabul, a welcoming place where Mr. Mojadedi’s father, a former judge, and his wife could both secure blue-collar jobs, find an affordable place to live and raise their children surrounded by mosques, halal restaurants and thousands of other Afghans.

“When I went to school, I saw other Afghan kids. I knew about my culture, and I felt a sense of, like, that my community was part of Fremont,” Mr. Mojadedi recalled recently over a game of teka and chapli kebabs during lunch with other young Afghans from the area.

But now, as the United States begins to absorb a new wave of refugees who were frantically evacuated from Kabul in the final, chaotic days of America’s 20-year war in Afghanistan, it is far from clear that a place like Fremont would be an ideal destination for them. Housing in the Bay Area city is out of reach, with one-bedroom apartments going for more than $2,500 a month. Jobs can be tougher to get than in many other parts of the country. The cost of living is driven up by nearby Silicon Valley. Even longtime residents of Little Kabul are leaving for cheaper areas.

The alternative is to send the refugees to places like Fargo, N.D., or Tulsa, Okla., where jobs are plentiful, housing is cheap and mayors are eager for new workers.

But those communities lack the kind of cultural support that Mr. Mojadedi experienced. The displaced Afghans would most likely find language barriers, few social services and perhaps hostility toward foreigners. Already, there are signs of a backlash against refugees in some of the states where economic statistics suggest they are needed most.

That is the difficult question facing President Biden’s administration and the nation’s nonprofit resettlement organizations as they work to find places to live for the newly displaced Afghans. As of Nov. 19, more than 22,500 have been settled, including 3,500 in one week in October, and 42,500 more remain in temporary housing on eight military bases around the country, waiting for their new homes.

Initial agreements between the State Department and the resettlement agencies involved sending 5,255 to California, 4,481 to Texas, 1,800 to Oklahoma, 1,679 to Washington, 1,610 to Arizona, and hundreds more to almost every state. North Dakota will get at least 49 refugees. Mississippi and Alabama will get at least 10.

Where the refugees go from there is up to the resettlement agencies in each state. Sometimes, refugees will ask to live in communities where they already have family or friends. But officials said that many of the displaced Afghans who arrived this summer had no connection to the United States.

“Our job is to provide a safe and dignified welcome and to set people up for long-term success,” he said. “And that means doing everything we can to get them to the places where it’s affordable, where we connect them with jobs.”

For Mr. Biden, failure to integrate the refugees successfully could play into the hands of conservatives who oppose immigration — even for those who helped the Americans during the war — and claim the Afghans will rob Americans of jobs and bring the threat of crime into communities. After initially welcoming the refugees, the Republican governor of North Dakota has taken a harder line, echoing concerns of his party about vetting them.

Haomyyn Karimi, a former refugee who has been a baker at an Afghan market in Little Kabul for thirty years, choked up at the thought of another generation of Afghan refugees struggling to build a new life in the face of financial difficulty and discrimination.

“They had lives in Afghanistan,” Mr. Karimi said through an interpreter during a brief interview at the Maiwand Market in downtown Fremont. “Their money was in banks in Afghanistan that are no longer available to them. So they’re literally starting with nothing.”

‘They need to find workers.’

The refugees are arriving at a moment of severe economic need — labor shortages across the country mean that communities are desperate for workers. In Fargo, where the unemployment rate is 2.8 percent, many restaurants have to close early because they can’t find enough workers.

“Everybody’s looking for people,” said Daniel Hannaher, the director of the Fargo resettlement office for the Lutheran Immigration and Refugee Service, which expects to receive several dozen refugees soon. “And, you know, it’s getting to the point now where everybody’s mad about the restaurants.”

The same is true in Tulsa, where the unemployment rate is 3.5 percent and dropping. G.T. Bynum, the city’s Republican mayor, told Public Radio Tulsa that he’s eager for the new refugees to see that Tulsa “is a city where we help each other out, whether you’ve lived here your whole life or you just got off the plane from Afghanistan.”

Because refugees are authorized to work in the United States, much of the help is directed toward helping them find a job, Mr. Markell said. Refugees are also eligible to receive Medicaid benefits and food stamps.

Historically, refugees have quickly gotten to work in the U.S., without taking jobs from Americans.

About one in five new refugees to the United States finds employment in the first year of arrival in the country, a high rate among wealthy nations, according to a paper published by a trio of researchers at University College London last year in the Journal of Economic Perspectives. Employment rates for refugees to America jump sharply in the years that follow.

Critics of high levels of refugee acceptance, including top officials in the White House under former President Donald J. Trump, contend that refugees compete with American workers — particularly for low-wage jobs — and dramatically reduce how much those existing workers earn.

The vast majority of empirical economic research finds that isn’t true. An exhaustive report published by the office of the chief economist at the State Department examined settlement patterns of past refugees to the United States, comparing the economic outcomes of areas where they did and did not settle. It found “robust causal evidence that there is no adverse long-term impact of refugees on the U.S. labor market.”

If anything, economists say, the current labor market makes it even less likely that refugees would steal jobs or suppress wages for people already here. U.S. employers reported more than 10 million job openings nationwide in August, down slightly from a record 11 million in July. Workers have been slow to return to jobs or industries they left in the pandemic, leaving many restaurants and retail stores desperate to hire.

Few, if any, previous waves of refugees have entered the country with such high labor demand across the country, or with the lure of worker-parched areas that could offer relatively high starting salaries for even inexperienced staff.

And places like Fargo and Tulsa offer cheaper housing, too. The average rent for a one-bedroom apartment in Fargo is $730 a month, less than a third of what it is in Fremont. The average rent in Tulsa is $760.

But some have concerns about sending the Afghans to places where there are few familiar faces and prejudice is more common.

In Michigan, which is slated to get at least 1,280 refugees, stickers with the racist message “Afghan Refugee Hunting Permits” were posted in Ann Arbor by the Proud Boys, a white supremacist group.

In Oklahoma, John Bennett, the chairman of the state Republican Party, posted a Facebook video in which he rants about the dangers of Shariah, the Islamic legal code, accusing the refugees — without evidence — of being terrorists.

“Oklahomans, I encourage you to call and email the governor, call and email your legislators, and tell them: Do not allow Afghan refugees into Oklahoma,” Mr. Bennett said in the video.

But Mr. Markell said most communities — including conservative, Republican-leaning ones — have been very welcoming. He credits the country’s veterans, who have overwhelmingly embraced the Afghans.

“When they are as vocal as they have been, it helps a lot with elected officials of both parties,” Mr. Markell said.

Advocates say that despite having a higher cost of living and fewer available jobs, established Afghan enclaves like Fremont can provide a much-needed support network.

The International Rescue Committee, which operates a resettlement office in Oakland, Calif., near Fremont, said it had established committees on housing, health, case management and legal issues even before the mass evacuation from Kabul this summer. The Oakland office is expecting at least 600 to 700 Afghan refugees to be resettled in the area.

Those who go to Fremont will find a raft of existing services thanks to the presence of an estimated 25,000 to 30,000 Afghans in the city: adult schools to teach them English; mental health services aimed at people from Afghanistan; and informal help from area mosques.

Some local banks in Fremont are partnering with the city to provide financial coaching.

“That support is critical,” said Jordane Tofighi, the director of the Oakland office. “Some of the local mosques are doing food distribution. Some of the grocery stores have food pickup hours.”

Fremont also boasts social service agencies, including the Afghan Coalition, which have been catering to the community’s Afghan residents for several decades. Mizgon Darby, who works for the organization, has been pressing the resettlement agencies, local governments and the state to provide more financial resources for the latest wave of refugees.

“The question is, in these different areas that they are being settled into, who is the designated agency that is helping them in those cases?” Ms. Darby said during an interview in her Fremont office recently. “Who’s going to navigate for them or help them navigate?”

Mr. Karimi, the baker at the Fremont market, said he’s hopeful that the latest wave of refugees will find the support they need to thrive in their new country. He said people like himself owe it to the new arrivals to support them with jobs, money and encouragement.

“If they want my blood,” he said, pledging his help for the new arrivals as tears streamed down his face, “I will give them my blood.”