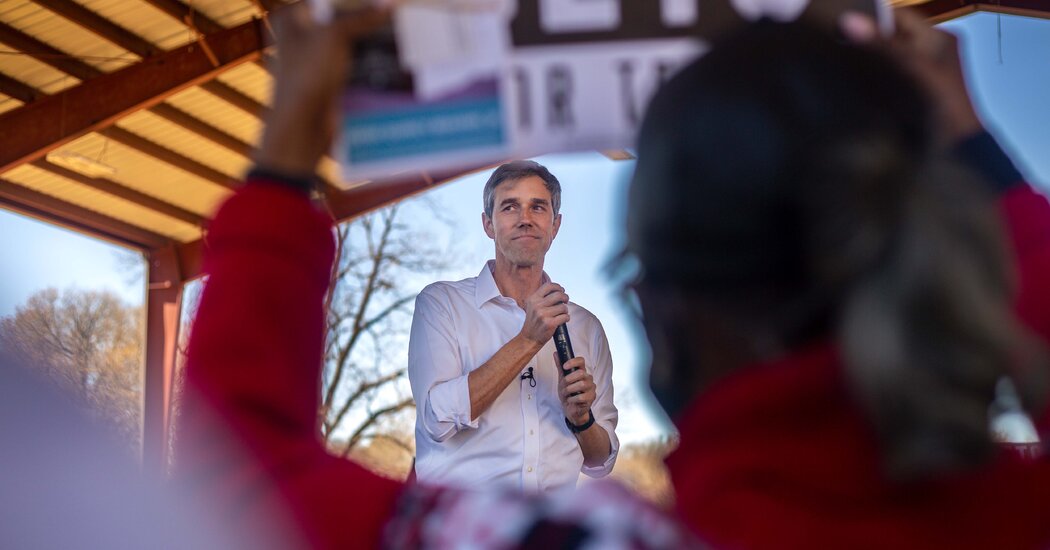 More than 100 supporters gathered last week in a park in the city of Tyler, southeast of Dallas in the Piney Woods region. Among the friendly crowd, however, there was concern and even skepticism as Mr. O’Rourke tries to become the first Democratic governor of Texas in nearly 30 years.

The Texas primary is fast approaching on March 1 — early voting began on Monday — but his real challenge is the general election in November, when he is expected to face the Republican incumbent, Gov. Greg Abbott. Some of Mr. O’Rourke’s comments aimed at wooing national Democratic voters in the 2020 presidential primary — such as “Hell yes, we’re going to take your AR-15” — may have already weakened if not doomed his chances in November.

“The comment about guns is going to be his biggest problem,” said Holly Gage, 40, who arrived at the Tyler park early with her family. “My husband is on the fence. It’s due to the gun thing.”

Mr. O’Rourke’s presidential campaign shadows his run for governor, complicating his effort to present himself as a pragmatic, there-for-you Texan who embraces responsible gun ownership and wants to win over moderate voters. His 2020 campaign remarks have figured prominently in attacks by Mr. Abbott and are familiar to many voters in a state where Democrats also proudly own guns. Mr. O’Rourke counts himself among their number — he and his wife own firearms, his campaign said — and he appears well aware of the liability.

“I’m not interested in taking anything from anyone,” Mr. O’Rourke said during a news conference in Tyler, in response to questions from The New York Times. “What I want to make sure we do is defend the Second Amendment.”

Later in a telephone interview, he said he did not regret any policy positions he took while running for president and denied that he was walking back his comments about assault weapons. He said that as governor, he would push for universal background checks and requirements for the safe storage of firearms.

“I don’t think that we should have AR-15s and AK-47s on the streets of this state — I have seen what they do to my fellow Texans in El Paso in 2019,” he said, referring to a gunman who killed 23 people at a Walmart in the deadliest anti-Latino attack in modern American history. “I haven’t changed a thing about that. I’m just telling you I’m going to focus on what I can actually do as governor and where the common ground is.”

Mr. O’Rourke’s predicament illustrates how hard it can be for a red-state Democrat to return to local politics after running for federal office in the national spotlight. What appeals to voters in a crowded Democratic primary for president may turn off those in a statewide race back home in a Republican-dominated state.

A Look Ahead to the 2022 U.S. Midterm Elections

At the same time, Mr. O’Rourke has attracted legions of supporters and inspired Texas Democrats with his willingness to take on the state’s most powerful officeholders, and his charismatic insistence that Texas is not destined to remain in Republican hands.

“No one is going to ride to our rescue, so we shouldn’t expect that,” Mr. O’Rourke said in the interview, citing new restrictive laws on abortion and voting passed by the State Legislature and signed by Mr. Abbott last year. “It’s on us, and that’s OK,” he added. “Traveling the state, it renews my confidence that we can do this.”

A former three-term congressman from El Paso, Mr. O’Rourke, 49, entered the race for governor late last fall, delivering a jolt to a contest that many Democrats saw as unwinnable: an off-year election favoring Republicans; an incumbent governor with a roughly $60 million campaign war chest; and that decades-long losing streak. No Democrat has won a statewide race in Texas since 1994.

“We don’t get to pick and choose what the political environment is like,” said State Representative Trey Martinez Fischer, a Democrat from San Antonio who has offered advice to Mr. O’Rourke during his campaign.

Mr. Martinez Fischer said he did not believe, as some Texas political analysts do, that Mr. O’Rourke’s run was aimed at bolstering Democratic candidates in local races rather than actually winning. “I don’t think that Beto is looking to do any sort of suicide mission,” he said.

Mr. O’Rourke remains the only Democrat in Texas with a strong statewide campaign organization, including thousands of devoted volunteers and an ability to raise money that rivals Mr. Abbott, the two-term Republican incumbent who has overseen a hard right turn in state government. During the most recent three-week filing period last month, Mr. O’Rourke raised $1.3 million, spent $600,000 and had $6 million in his campaign account. Mr. Abbott pulled in $1.4 million, spent $4.5 million and still had $62 million available in his account.

Much about the O’Rourke campaign echoes his 2018 race to try to unseat Senator Ted Cruz, which energized Democrats across Texas and brought donations pouring in from around the country. There are the same black-and-white “Beto” posters, the speeches he delivers from the center of fawning crowds and the sense that an upset is possible.

But much has changed. Mr. O’Rourke is no longer a fresh-faced newcomer. A poll last year found that he was better known among Texans than the actor Matthew McConaughey, who briefly flirted with a run for governor himself. Most Texans have an opinion of Mr. O’Rourke, and for many it is not favorable. So far, he has trailed Mr. Abbott in every poll, often by double digits.

Mr. O’Rourke has been running a more traditional campaign than he did in 2018, taking large contributions, conducting polls on issues and going on the attack early against Mr. Abbott, including in a new ad. He has also been more closely coordinating with the state party.

“We’ve already had discussions with him to get the Democratic Party and him in perfect sync,” said Gilberto Hinojosa, the chairman of the Texas Democratic Party. “That’s something that did not happen in 2018.”

And Mr. O’Rourke does not benefit from the long runway he had in 2018, as he traveled the state and built his events from dozens of people to thousands. Now, as he drives around Texas highlighting the impacts of last year’s electrical grid failure, he is trailed by the opposition — members of Mr. Abbott’s campaign who have been coordinating with protesters at many of the stops.

In Tyler, Mr. Abbott’s campaign spokesman, Mark Miner, arrived earlier than Mr. O’Rourke and helped to arrange a protest in favor of the oil and gas industry that included a big rig truck emblazoned with a heroic image of former President Donald J. Trump.

“It’s about the Green New Deal versus the energy industry,” said State Representative Jay Dean, an East Texas Republican and general manager at Thomas Oilfield Services, as he stood near the big rig that he had helped bring to the protest. “I’m not that concerned about him,” he added of Mr. O’Rourke. “First of all, he’s not going to win.”

At events in three cities last week, it was clear that Mr. O’Rourke, still an energetic campaigner who drives himself around Texas, has become more careful in his remarks and packaged in his presentation, as he is tugged along on a tight schedule kept by his campaign handlers. And his crowds are full of people who have supported Mr. O’Rourke for years, raising the question of how much he can grow his current base.

During the more than 2,300-mile tour, which ended Tuesday on the anniversary of the day when the lights went out in most of Texas, Mr. O’Rourke delivered variations on a short speech focused on his proposals to address the wobbly Texas grid, such as connecting it with other states and prosecuting those who reaped huge profits from last year’s failure. He elicits cheers with promises to legalize marijuana and protect voting rights.

“First time voters!” Mr. O’Rourke yelled before posing with a group of young women he met in Waco, after a nighttime speech in a park that drew what looked to be more than 200 people.

In Austin the next day, Mr. O’Rourke visited a nonprofit that helped feed stranded residents during last year’s power grid failure, and he went along as their workers handed out meals to homeless men and women in a park between the Colorado River and a busy roadway.

“You stay here?” Mr. O’Rourke asked during a conversation with Josue Garcia, 35.

“Yes, in the green tent,” said Mr. Garcia, adding that he lived in the park with his wife and an adult stepdaughter, who works at Whataburger.

“I’ll vote for him for sure,” Mr. Garcia said after Mr. O’Rourke went to talk to another man.

Later, as the sun set over the State Capitol, a young and enthusiastic crowd gathered to see Mr. O’Rourke in the parking lot of the Texas AFL-CIO, across from the governor’s mansion.

Mr. Abbott was out of town at the time but his campaign spokesman, Mr. Miner, a longtime senior communications aide to top Republicans, moved through the crowd of O’Rourke supporters, handing out fliers to reporters until he was escorted away by a union representative.

On the sidewalk, protesters waved a Trump flag and an American flag and shouted — “Free crack pipes!” “Communism doesn’t work, Francis!” — in an attempt to interrupt Mr. O’Rourke’s nighttime speech, calling him by his middle name. An advertising truck showed a black-and-white video of Mr. O’Rourke morphing into President Biden, which was paid for by Mr. Abbott’s campaign.

Many of Mr. O’Rourke’s supporters recalled losing power last year. But their anger at the handling of the freeze wasn’t the only issue that drew them to the rally.

Nick Tripoli, 43, wore a mask with the words “Abort Greg Abbott” across it. He said he had heard Mr. O’Rourke speak in 2018 and had seen the enthusiasm he brought to Democrats.