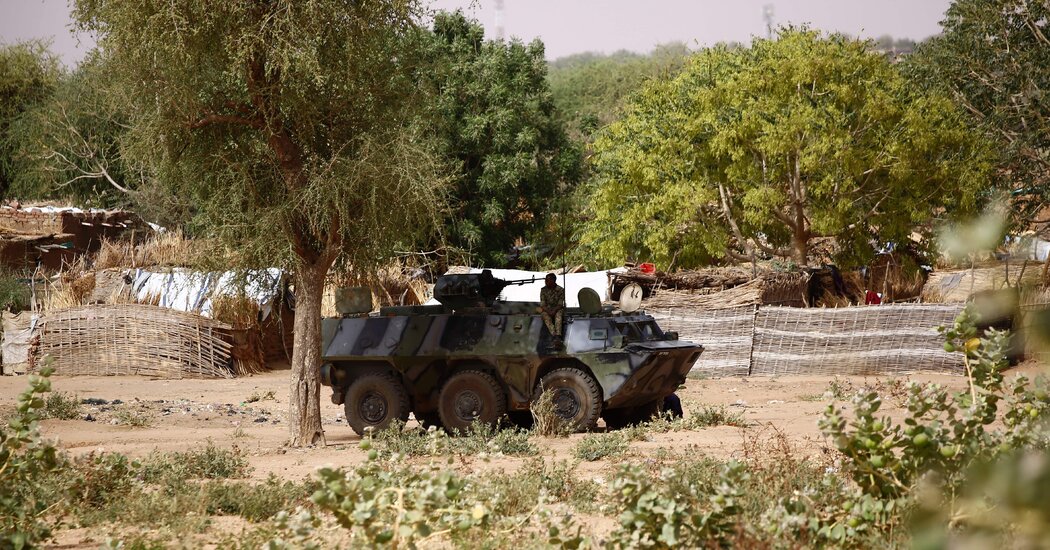 NAIROBI, Kenya — Dozens of people have been killed and their villages burned in inter-communal violence in Sudan’s West Darfur state, the United Nations said, worsening the state of crisis that has troubled the region for years.

The violence comes as Sudan’s leaders are working through their own crisis, one that is likely to distract them from Darfur’s mounting problems.

Sudan’s effort at a democratic transition is faltering, with thousands of demonstrators flooding the streets on Thursday to denounce the military’s deal with the civilian prime minister, Abdalla Hamdok. After almost a month under house arrest following a coup, Mr. Hamdok signed a new power-sharing agreement with the military in a bid to end a bloody standoff and restore the democratic process.

In Darfur, at least 43 people were killed and 46 villages burned and looted after conflict erupted last week in the Jebel Moon area between Arab herders and farmers from the Misseriya Jebel tribe, according to the U.N. Office for the Coordination of Humanitarian Affairs.

The local branch of the Central Committee of Sudanese Doctors said at least 17 people had been injured and were receiving treatment in local hospitals, though activists and aid organizations said the true number was most likely higher. The U.N. refugee agency said in an emailed statement that an unknown number of people had fled across the border into Chad. Several people, including children, remained missing, with some of those displaced fleeing into nearby mountains and caves.

On Oct. 25, a coup led by the military derailed Sudan’s transition to civilian rule and plunged the country back into fear and uncertainty.

“This is a serious tragedy,” said Adam Mohamed Adam, a spokesman for the Sudanese Coordinating Committee for Refugees and Displaced People, in a telephone interview. “These are very needy people, and the world should come to their rescue.”

As of Friday, the security situation in the area remained volatile, with humanitarian organizations struggling to get assurances of safety to travel into conflict areas and provide help. The deadlock remained despite a “significant outreach to all sides,” said William Carter, the Sudan country director for the Norwegian Refugee Council.

Mr. Carter said a joint mission of emergency responders was hoping to visit the area by early next week.

Experts say the deadly unrest in Darfur had already begun to intensify before a hybrid United Nations and African Union mission completed its withdrawal from the region this year. Under the deposed dictator Omar Hassan al-Bashir, the region endured a campaign of rape, murder and ethnic cleansing in which at least 300,000 people were killed and 2.7 million others displaced, according to the United Nations.

The violence has continued despite Mr. al-Bashir’s removal from power. In January, at least 250 people, including three humanitarian workers, were killed in inter-communal clashes in West Darfur that began after armed militias attacked and besieged a camp for internally displaced people. The latest clash between farmers and herders is part of a seasonal trend around nomadic movements and harvests, but aid workers say the recent attacks have been much more brutal.

“Searing ethnic violence in Darfur is devastating communities, razing whole settlements to the ground,” Mr. Carter said. “Without a unified, civilian-led security sector, it’s difficult to see how this deterioration could be checked, reversed.”

The thousands who took to the streets of the capital, Khartoum, and other major cities on Thursday to protest the deal between Mr. Hamdok and the army chief Lt. Gen. Abdel Fattah al-Burhan demanded “justice for the martyrs” killed in the weeks after the coup. Mr. Hamdok has been criticized by protesters and civilian members of his former cabinet for signing the agreement, arguing he was simply giving cover to continued military rule.

The protesters also criticized the failure to protect the lives and properties of people in West Darfur.

“Darfur is bleeding, what peace are you talking about?” some chanted, while others carried banners that read “The entire country is Darfur” and “Sudanese blood is one.”

Hatim Abdallah El Fadil, a civil society activist in El Geneina in West Darfur who is monitoring the situation, said the communication blackout imposed after the coup had complicated efforts to send or receive information from the region. Mr. El Fadil said that warring parties were mobilizing in the area, and that smoke was detected yesterday around a village east of Jebel Moon.

“We are expecting more problems, given the instability in the area,” he said in a telephone interview. “The situation is fragile.”