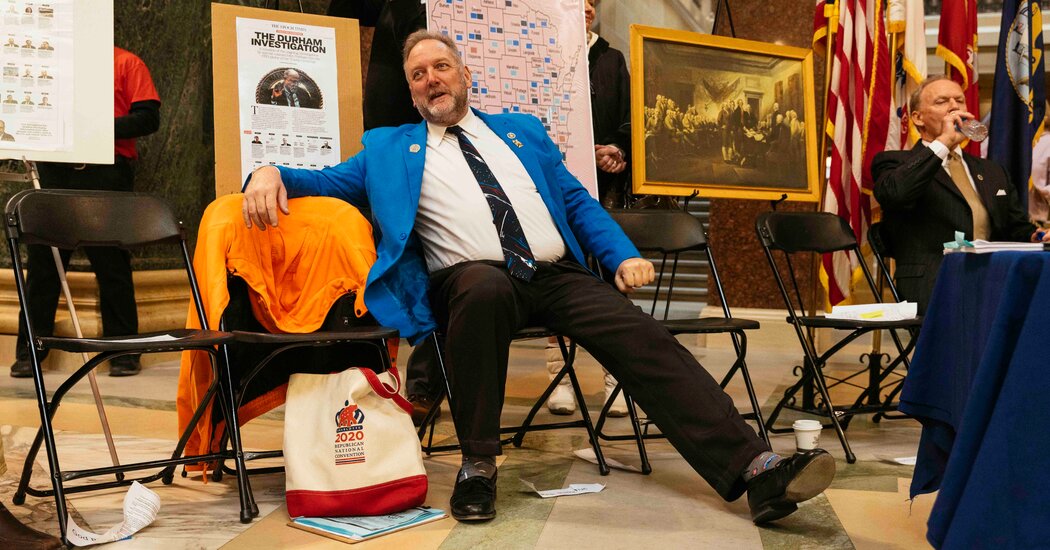 MADISON, Wis. — First, Wisconsin Republicans ordered an audit of the 2020 election. Then they passed a raft of new restrictions on voting. And in June, they authorized the nation’s only special counsel investigation into 2020.

Now, more than 15 months after former President Donald J. Trump lost the state by 20,682 votes, an increasingly vocal segment of the Republican Party is getting behind a new scheme: decertifying the results of the 2020 presidential election in hopes of reinstalling Mr. Trump in the White House.

Wisconsin is closer to the next federal election than the last, but the Republican effort to overturn the election results here is picking up steam rather than fading away — and spiraling further from reality as it goes. The latest turn, which has been fueled by Mr. Trump, bogus legal theories and a new candidate for governor, is creating chaos in the Republican Party and threatening to undermine its push to win the contests this year for governor and the Senate.

The situation in Wisconsin may be the most striking example of the struggle by Republican leaders to hold together their party when many of its most animated voters simply will not accept the reality of Mr. Trump’s loss.

In Wisconsin, Robin Vos, the Assembly speaker who has allowed vague theories about fraud to spread unchecked, is now struggling to rein them in. Even Mr. Vos’s careful attempts have turned election deniers sharply against him.

“This is a real issue,” said Timothy Ramthun, the Republican state representative who has turned his push to decertify the election into a nascent campaign for governor. Mr. Ramthun has asserted that if the Wisconsin Legislature decertifies the results and rescinds the state’s 10 electoral votes — an action with no basis in state or federal law — it could set off a movement that would oust President Biden from office.

Although support for the decertification campaign is difficult to measure, it wouldn’t take much to make an impact in a state where elections are regularly decided by narrow margins. Mr. Ramthun is drawing crowds, and his campaign has already revived Republicans’ divisive debate over false claims of fraud in 2020. Nearly two-thirds of Wisconsin Republicans were not confident in the state’s 2020 presidential election results, according to an October poll from the Marquette University Law School in Milwaukee.

“This is just not what the Republican Party needs right now,” said Rob Swearingen, a Republican state representative from the conservative Northwoods. “We shouldn’t be fighting among ourselves about what happened, you know, a year and a half ago.”

Wisconsin has the nation’s most active decertification effort. In Arizona, a Republican state legislator running for secretary of state, along with candidates for Congress, has called for recalling the state’s electoral votes. In September, Mr. Trump wrote a letter to Georgia officials asking them to decertify Mr. Biden’s victory there, but no organized effort materialized.

In Wisconsin, the decertification push has turned Republican politics on its head. After more than a decade of Republican leaders marching in lock-step with their base, the party is hobbled by infighting and it’s Democrats who are aligned behind Gov. Tony Evers, who is seeking a second term in November.

“Republicans now are arguing over whether we want democracy or not,” Mr. Evers said in an interview on Friday.

Mr. Ramthun, a 64-year-old lawmaker who lives in a village of 2,000 people an hour northwest of Milwaukee, has ridden his decertification push to become a sudden folk hero to the party’s Trump wing. Stephen K. Bannon, Mr. Trump’s former adviser, has hosted Mr. Ramthun on his podcast. At party events, he shows off a 72-page presentation in which he claims, falsely, that legislators have the power to declare Wisconsin’s election results invalid and recall the state’s electoral votes.

Mr. Ramthun has received bigger applause at local Republican gatherings than the leading candidates for governor, and last weekend he joined the race himself, announcing his candidacy at a campaign kickoff where he was introduced by Mike Lindell, the MyPillow chief executive who has financed numerous efforts to undermine and overturn the 2020 election.

“Who in Wisconsin is leading the charge to decertify this fraudulent election?” the former president said in a statement.

It did not take long before the state’s top Republicans were responding to Mr. Ramthun’s election conspiracies. Within days, both of his Republican rivals for governor released new plans to strengthen partisan control of Wisconsin’s elections.

During a radio appearance on Thursday, former Lt. Gov. Rebecca Kleefisch, the party establishment’s preferred candidate, refused to admit that Mr. Biden won the 2020 election — something she had already conceded last September. Ms. Kleefisch declined to be interviewed.

Yet, Mr. Ramthun claims to have the grass-roots energy on his side. On Tuesday, he drew a crowd of about 250 people for a two-hour rally in the rotunda of the Wisconsin State Capitol.

“People are foaming at the mouth over this issue,” he said, listening intently as speakers offered both conspiracy theories and assurances to members of the crowd that they were of sound mind.

“You’re not crazy,” Janel Brandtjen, the chairwoman of the Assembly’s elections committee, told the crowd.

One speaker tied Mr. Vos, through a college roommate and former House Speaker Paul Ryan, to the false claims circulating in right-wing media that Hillary Clinton’s campaign spied on Mr. Trump. Another was introduced under a pseudonym, then promptly announced herself as a candidate for lieutenant governor.

The rally closed with remarks from Harry Wait, an organizer of a conservative group in Racine County called HOT Government, an acronym for honest, open and transparent.

“I want to remind everybody,” Mr. Wait said, “that yesterday’s conspiracies may be today’s reality.”

Mr. Ramthun says he has questioned the result of every presidential election in Wisconsin since 1996. (He does not make an exception for the one Republican victory in that period: Mr. Trump’s in 2016.) He has pledged to consider ending the use of voting machines and to conduct an “independent full forensic physical cyber audit” of the 2020 election — and also of the 2022 election, regardless of how it turns out.

Mr. Ramthun has adopted a biblical slogan — “Let there be light” — a reference to his claim that Mr. Vos is hiding the truth from voters. If Wisconsin pulls back its electoral votes, Mr. Ramthun said, other states may follow.

(American presidents can be removed from office only by impeachment or by a vote of the cabinet.)

All of this has become too much for Mr. Vos, who before the Trump era was a steady Republican foot soldier focused on taxes, spending and labor laws.

Mr. Vos has often appeased his party’s election conspiracists, expressing his own doubts about who really won in Wisconsin, calling for felony charges against Wisconsin’s top election administrators and authorizing an investigation into the 2020 election, which is still underway.

Now, even as he draws the line on decertification, Mr. Vos has tried to placate his base and plead for patience. He announced this week the Assembly plans to vote on a new package of voting bills. (Mr. Evers said in the interview on Friday that he would veto any new restrictions.)

“It’s simply a matter of misdirected anger,” he said, of the criticism he’s facing. “They have already assumed that the Democrats are hopeless, and now they are focused on those of us who are trying to get at the truth, hoping we do more.”

Other Republicans in the state are also walking a political tightrope — refusing to accept Mr. Biden’s victory while avoiding taking a position on Mr. Ramthun’s decertification effort.

“Evidence might be out there, that is something other people are working on,” said Ron Tusler, who sits on the Assembly’s elections committee. “It’s too early to be sure but it’s possible we try it later.”

State Senator Kathy Bernier is the only of Wisconsin’s 82 Republican state legislators who has made a public case that Mr. Trump lost the state fairly, without widespread fraud.

Ms. Bernier, the chairwoman of the State Senate’s elections committee, in November asked the Wisconsin Legislature’s attorneys to weigh in on the legality of decertifying an election — it is not possible, they said. In December, she called for an end to the Assembly’s investigation into 2020. Three weeks later, she announced she won’t seek re-election this year.

“I have no explanation as to why legislators want to pursue voter-fraud conspiracy theories that have not been proven,” Ms. Bernier said in an interview. “They should not do that. It’s dangerous to our democratic republic. They need to step back and only speak about things that they know and understand and can do. And outside of that, they should button it up.”