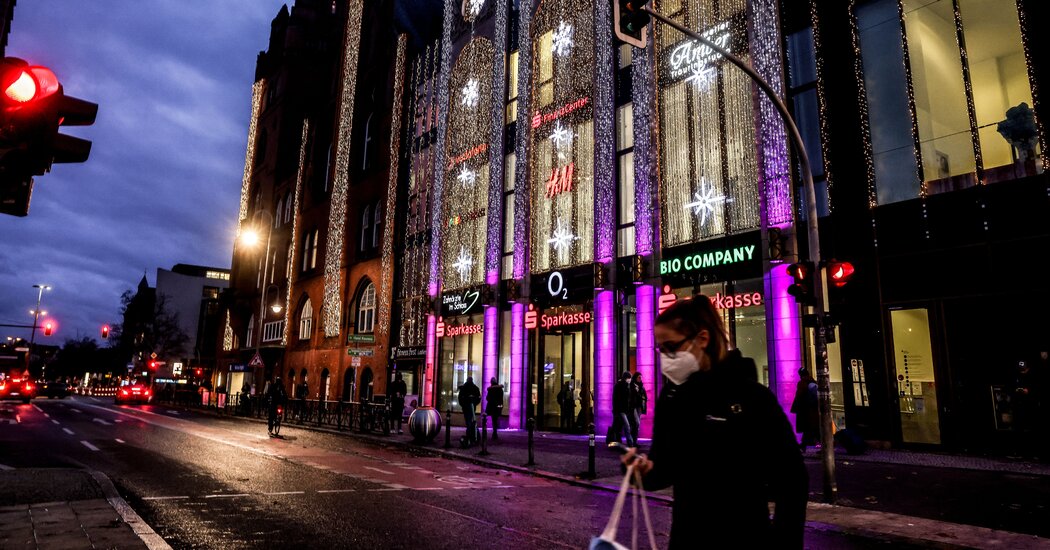 BERLIN — Germany announced tough new restrictions on Thursday to exclude unvaccinated people from much of public life, seeking to break a soaring fourth wave of the coronavirus pandemic and blunt the worrisome new Omicron variant.

The new rules, which stopped short of enforcing a complete lockdown on the unvaccinated, followed an agreement hammered out between Chancellor Angela Merkel, her successor, Olaf Scholz, and state governors.

Under the new rules, those wishing to go to bars and restaurants, or shop anywhere but in stores carrying basic necessities — like pharmacies or grocery stores — have to present proof of vaccination or documentation of recovery from a recent coronavirus infection. Some of those restrictions have been in effect already in some states; the agreement sets a uniform nationwide standard.

With the new rules, and a promise by Mr. Scholz this week that he would push a law making vaccinations mandatory, Germany is following the path of Austria, which recently mandated that all adults be inoculated by February. It comes as both countries contend with strident anti-vaccination sentiment in their populations that have kept vaccination rates low compared with other western European countries.

“You can see from the decisions that we have understood that the situation is very serious,” Ms. Merkel said at a news conference after a teleconference with state governors.

The announcement, which followed two meetings between federal and state governments in three days, came after the incoming government was criticized as not taking the Covid-19 crisis seriously enough. Though Ms. Merkel is still chancellor, Mr. Scholz was active at the meetings and vocal at the news conference afterward, underlining that the new rules and the establishment of a vaccine task force were supported by both the incoming and outgoing administrations.

“I am glad that in this difficult situation we are working shoulder to shoulder, that party politics is taking a back seat and the health of the citizens is the focus of the common endeavor,” said Mr. Scholz, who is expected to be sworn in next week.

In addition to the restrictions on shopping by the unvaccinated, states may also require under the new rules that negative test results be presented in addition to proof of immunity at events, restaurants, bars or even shops.

In a throwback to earlier lockdowns, those who can’t prove they have recovered from the illness or that they have been vaccinated will be restricted to meetings or gatherings, whether at home or in a public space, of only two households.

However, the restrictions stop short of requiring the unvaccinated to stay at home, in contrast with the stricter Austrian restrictions.

Schools will remain open, but masks will be made mandatory.

In what is likely to be Ms. Merkel’s last meeting with governors, the states agreed to pass the new rules as soon as possible, amid growing concerns over soaring cases in Germany.

Nearly 69 percent of the population is fully vaccinated, near the E.U. average, but several percentage points lower than in Portugal, Spain, Belgium, Denmark and Ireland.

Asked how she felt about handing the reins to Mr. Scholz, Ms. Merkel responded: “The fact that we’re in such a strong fourth wave now, that doesn’t make me happy.”

On Thursday, Mr. Scholz reiterated a promise he has made to oversee the administering of an additional 30 million doses of the vaccine by Christmas, and a pledge he made Tuesday to pass a mandatory vaccination law that could go into effect this winter.

Austria, the only European country to order mandatory vaccinations, has almost twice as many cases per capita as Germany. But Austria’s caseload, still among the world’s highest, has started to decline, while Germany’s has not.

Christian Lindner, the head of the Free Democrats, the junior coalition partner in the incoming German government, has long criticized Ms. Merkel’s government over coronavirus restrictions. Yet he signaled on Thursday that he would also be open to mandatory vaccinations, given the current rate of infection.

Opposition to the rules announced Thursday is expected from parts of eastern Germany, where tougher restrictions are already in place to deal with regional outbreaks, and where there have been regular protests against government measures. On Monday, 2,700 people protested in 20 different locations, the police said.

Under the new measures, bars and nightclubs in virus hot spots — districts where more than 350 infections in a week are registered per 100,000 people — would be forced to close and indoor gatherings would be limited to 50 participants.

In other districts, large gatherings at events like soccer games and cultural shows would face caps, depending on the size of venues, even for fully vaccinated spectators.

And, as was the case last year, selling firecrackers will be prohibited at the end of December, in an attempt to dissuade crowded New Year’s parties.