He Sold Away His People’s Heritage. He’s in the Jungle to Get It Back. 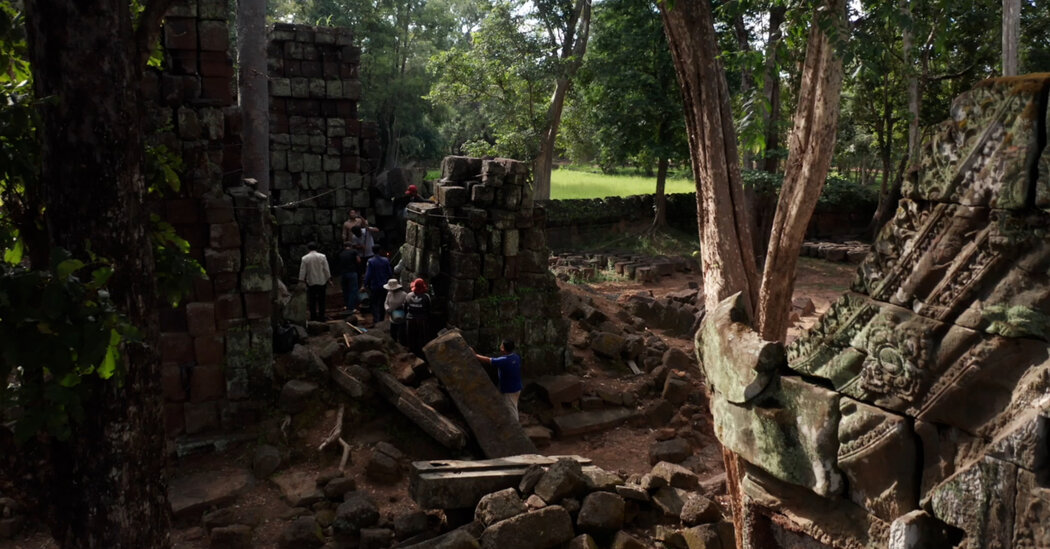 As Toek Tik recounts it, he was a teenage foot soldier for the genocidal Khmer Rouge in Cambodia in the late 1970s when he first realized that looting ancient statues could be a lucrative trade.

Once, while bartering stolen cattle for clothing along the border with Thailand, he recalled, a trading partner gestured toward his ox cart, which held the heads of statues Toek Tik had collected near his home.

To his surprise, he was offered money, hard currency, for them. For the livestock, he said, “they would give only shirts or a battery.”

So began the prolific looting career of an unschooled man from a thatch-roofed hut who recently began disclosing to authorities how he oversaw hundreds of confederates as they swept through temple ruins, pillaging sculptures and other treasures.

In the two decades he was active, ending in the late 1990s, Toek Tik, who goes by the nickname Lion, estimates he plundered more than 1,000 artifacts, many of them considered the finest masterpieces of Khmer culture, such as huge sandstone sculptures of deities and their attendants.

So far, he has identified more than 100 as being in the collections of museums around the world, including the Metropolitan Museum of Art in New York. Others he has spotted in respected private collections.

His testimony, and that of others who worked for him, has become the centerpiece of a global effort by Cambodia to claw back its fabled heritage as it challenges the museums and collectors who have long defended their acquisitions as fully documented and unquestionably lawful.

Already Cambodian officials have begun to press the Met to return 45 items, in part because of the testimony of Toek Tik, who says he personally excavated most of them. The Met has said it began “proactively” to research its collection independent of the Cambodian request.

Some of the most illustrious artifacts that Toek Tik says he stole ended up in the hands of Douglas A.J. Latchford, a collector and dealer who was indicted as an antiquities trafficker in 2019, just months before his death.

For decades, Latchford was viewed as a scholar of Khmer culture, a man once knighted by Cambodia for his gifts to its museums. But Toek Tik’s account further unmasked him, identifying Latchford as someone who directed much of the looting through an intermediary and who browsed temple photographs taken by Toek Tik to decide which items should be stolen.

Many of the pieces later sold on the art market for hundreds of thousands of dollars, while Toek Tik said he never received more than a few hundred dollars for a single item, a sum he routinely split with his crew.

Now in his 60s and diagnosed with stage IV pancreatic cancer, Toek Tik said he is working to redeem himself by returning to the places he pillaged to help investigators dig for hard evidence of his crimes.

“I regret what I did,” he said on a video call through a translator. “I want the gods to come home.”

Elements of Toek Tik’s account, given over a period of three years to Cambodian investigators but only now being publicly discussed, remain uncorroborated, such as his recollection of being involved in mass killings under the Khmer Rouge. But officials have come to trust him, as has the U.S. Department of Justice, which relied on his version of events in court papers filed this year that demanded the return of Cambodian artifacts from a New York collector and the Denver Museum of Art.

The authorities have been convinced, in part, by Toek Tik’s ability to pinpoint the exact location of feet, bases and other remnants of statuary he says he once stole.

Just this month, Toek Tik helped archaeologists pick through the ruins of a temple complex named Prasat Thom, which sits within the grounds of a thousand-year-old Khmer Empire royal city that was known as Koh Ker and is now an archaeological site.

After scraping through piles of dirt and stones, researchers found what appear to be pieces of the carved headdress from a female deity that Toek Tik recalls removing.

Cambodian officials say the pieces may match missing elements from a statue on display at an American museum.

Eric Bourdonneau, an archaeologist and expert on Khmer-era artifacts, said the details being offered now by Toek Tik are crucial to reconstructing the history of that dynasty.

“Because, for most of the pieces,” he said, “without such eyewitness and firsthand (literally) accounts, it would be impossible to guess their provenance.”

Cambodian investigators identified Toek Tik as a looting suspect a decade ago based on interviews with villagers. Evasive at first, he ultimately came to describe looting on a scale that seemed almost unimaginable, the investigators said.

“I was skeptical — I was very questioning at first,” said Hab Touch, secretary of state at the Ministry of Culture & Fine Arts, who has also spoken with some of Toek Tik’s confederates.

“Now we believe him very much,” Touch continued, “because his information has been an important source to us on Khmer history and his actions and his claims are in line with the archaeological record.”

A thin, unassuming man with wire-rim glasses and graying hair, Toek Tik told of his thievery, and his efforts to undo it, during four recent interviews with The New York Times in which he detailed his violent days as a looter and a conscripted Khmer Rouge soldier.

During the interviews, conducted over video with the help of a translator and a lawyer for the ministry, Bradley J. Gordon, Toek Tik expressed remorse for the killings he was involved in. He said he had participated under the threat of his own death and had ultimately fled the Khmer Rouge to avoid being involved in further bloodshed.

Cambodian officials have provided assurances that Toek Tik will not be charged for his cultural heritage crimes given his cooperation in the looting investigation. Children who committed crimes under the direction of the Khmer Rouge have not been prosecuted.

Toek Tik said he is the eldest of 25 children by a father who had many wives and that he grew up in a tiny village roughly 100 miles south of the Thai border.

As a boy, he said, he watched his father, uncle and other elders occasionally remove statues and use them for barter. By 1972, as Cambodia fell into civil war, he was pressed into service by the Khmer Rouge, which would later destroy the country’s economy and kill its professional classes.

Initially used as a messenger between regional commanders, he said that in 1977 he was forced to murder civilians. “I was just a kid and I was following orders,” he said.

Sickened and fearful, he said he fled to Kulen Mountain, a holy site to Cambodians. There he hid in caves and lived off rice and fish in an area teeming with monkeys, snakes and water buffalo.

“Do you want to know how to face a tiger?” he asked. “You sit very still until he walks away.”

While in hiding, he discovered ancient bones under boulders and carvings on cave walls. Following a trail of graves, he came across an unexplored temple that he later looted heavily.

When Toek Tik emerged a year later, he began to barter cattle until he came to realize the value of the relics he had found. He set out to sell them to Cambodian and Thai traders, including a Khmer Rouge official that the Cambodian research team refers to only as Sleeping Giant.

Cambodian officials have determined that Sleeping Giant developed a relationship with Latchford, the Thailand-based collector and dealer.

In 1990, Toek Tik told investigators, two Thai men with a map and orders from Sleeping Giant asked for help finding a mountainous site believed to contain valuable artifacts. Toek Tik and his crew ultimately looted the site of bronzes, jars of buried gold and other items. Some of the items later appeared in scholarly books co-authored by Latchford, startling Cambodian archaeologists who said they had no idea they existed.

The archaeologists say there is evidence the place might be a previously unknown burial site for Khmer royalty who reigned from the ninth to 12th centuries.

Investigators say photographs recently found on Latchford’s computer, which was turned over to Cambodian authorities by his daughter as part of a large return of artifacts, support Toek Tik’s account. One image is of Toek Tik’s daughter’s house with a statue in front. Others show artifacts freshly unearthed.

By the 1990s, Toek Tik said he had teams working throughout the country, responding to tips from villagers who came across relics and deploying metal detectors and other tools in the hunt.

Over time, he and his confederates developed code words to use as they communicated via walkie-talkie. “Going dancing” meant going on a temple raid. Finding “bricks” meant unearthing bronzes. “Red objects” referred to gold. He organized his people into three groups: the hunters-scouts, the gatherers-bearers, and the overseers, a group that he led.

But Toek Tik said he quit looting in the late 1990s after being disturbed and saddened to find human bones under a statue he was excavating.

Cambodian officials have marveled at how Toek Tik mastered the logistics of temple looting, using compass points to divine the locations of long-buried objects, bringing them to sites they did not know existed and speaking with authority on the nuances of Khmer-era art.

Once an object was excavated and sold, Toek Tik said, he did not spend a lot of time tracking it. So he was surprised, he said, when researchers first showed him “Adoration and Glory (2003),” one of three lushly illustrated books by Latchford and a co-author, Emma Bunker.

The statue on the cover, “Skanda and Shiva,” was one he recalled stealing from Prasat Krachap, a temple at Koh Ker.

He grew animated during one videotaped interview as he re-enacted how he had crawled into the temple’s hidden vestibule to remove it and another statue, “Skanda on a Peacock,” which is also featured in Latchford’s book.

During negotiations with the Latchford family last year for the return of “Skanda and Shiva,” Cambodian officials arranged an excavation at the site and, with Toek Tik’s help, discovered the arm and ear of Skanda, the child depicted in the statue. Those fragments were later matched to the original, which had been fitted with a stone replacement arm and ear.

They also dug up a base thought to belong to “Skanda on a Peacock,” which had sat beside “Skanda and Shiva” in the same antechamber.

Federal prosecutors in New York embraced the credibility of Toek Tik when they announced in July that the family of the collector who had bought “Skanda on a Peacock” had agreed to surrender it for return to Cambodia. Identifying Toek Tik in court papers only by the pseudonym Looter-1, they explained why his eye-opening account of rampant theft has now been so widely embraced as credible.

“The information Looter-1 has provided,” the complaint filed by prosecutors said, “has been corroborated by, among other things, archeological evidence, photographs, and other individuals involved in looting.”