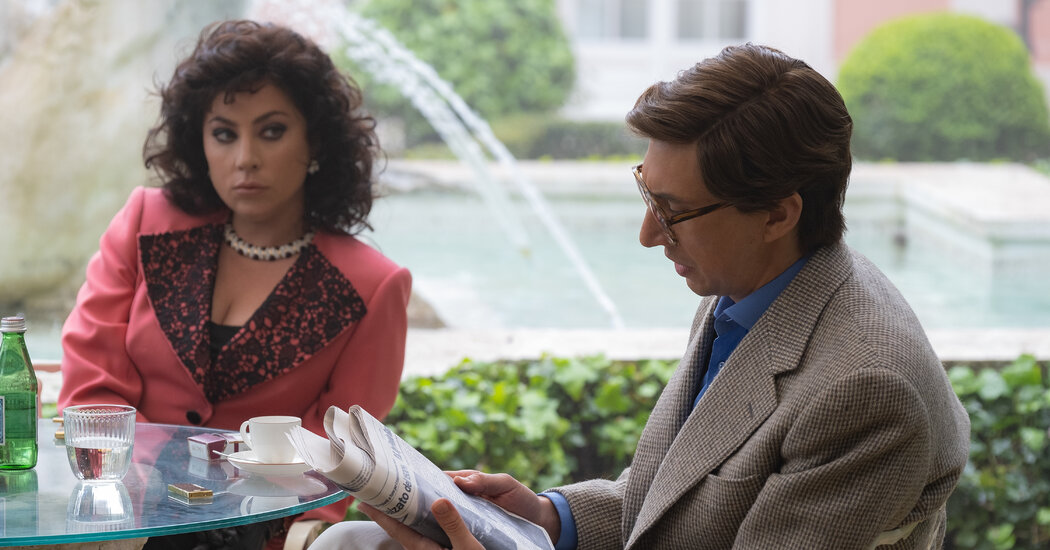 The kindest thing I can say about “House of Gucci” — and also the cruelest — is that it should have been an Italian movie. Set mostly in Milan, it spins out a sprawling, chaotic, borderline-operatic tale of family feuding, sexual jealousy and capitalist intrigue, with plenty of drinks, cigarettes and snacks (the carpaccio comes highly recommended). Also cars, shoes, hats, sport coats, handbags, dresses, lingerie — whatever you want!

But for all that abundance, something is missing. A lot of things, really, but mostly a strong idea and a credible reason for existing. The true story of how the Gucci family lost control of the company that still bears its name — and of how its scion, Maurizio Gucci, lost his life to a hit man’s bullets — could have inspired Bernardo Bertolucci to heights of decadent spectacle, Luchino Visconti to flights of dialectical extravagance or Lina Wertmuller to feats of perverse ideological analysis. The raw material plays as tragedy and farce at the same time.

The actual director, Ridley Scott, possesses ample style and impressive craft, but at least this time around seems to be lacking the necessary vision or inspiration. (His underrated “All the Money in the World” was a tougher, tarter treatment of similar material.) The script, by Becky Johnston and Roberto Bentivegna (based on Sara Gay Forden’s book), has a repetitive, wheel-spinning quality. Most of the scenes consist of Guccis yelling at other Guccis — in Milan and New York, amid the Alps and near a lake, in hotels and conference rooms and villas and cafes. The shouting, in heavily accented English, lasts from the early ’70s to the mid-90s, and you can tell what year it is by scrutinizing the clothes and haircuts. For a while it seems like the music cues (David Bowie, Eurythmics) might also help, but at some point in the ’80s the playlist gets scrambled.

About those Guccis. You’ve heard of ham? Well, this is a family-size salumi platter. Adam Driver is relatively restrained as Maurizio, who as a law student meets Patrizia Reggiani at a party, where she charmingly mistakes him for a bartender. She comes from a less exalted family — her father owns a small trucking company — and she is played by Lady Gaga with the verve of an Anna Magnani avatar in a Super Mario video game.

This is fun for a while — the movie is more than two and a half hours long — and Gaga and Driver have an interesting chemistry. Maurizio is quiet and a little passive, but Patrizia nudges him toward a bolder idea of himself. He defies his aristocratic father, Rodolfo (an impeccable, sepulchral Jeremy Irons), who regards Patrizia as a social climber and a gold digger. He isn’t altogether wrong, but Maurizio marries her anyway, and finds brief happiness working for his in-laws, trading in his cut-to-measure suits for proletarian coveralls. He plays soccer and horses around with the other drivers and mechanics during lunch break until Patrizia summons him to the office to attend to his conjugal duties. It’s pretty hot stuff.

But as the mood shifts from sex comedy toward loftier, more somber matters — money, loyalty, family honor — “House of Gucci” manages to become both overwrought and tedious. The older Gucci generation is divided between Rodolfo and his brother Aldo (Al Pacino), who runs the New York side of the business. Casting Pacino and Irons as siblings is a witty move: at this stage in their careers, both are highly mannered, sometimes almost self-parodic performers who exist at opposite ends of the thermal spectrum. If Irons were any chillier, he would crystallize. If Pacino ran any hotter, he’d burst into flame.

What to Know About ‘House of Gucci’

“House of Gucci,” Ridley Scott’s film on the dynasty behind the Gucci fashion house, arrives in theaters across the United States on Nov. 24, 2021. Here’s a look at the hotly anticipated biopic:

To complicate the kinship network, and to prevent a potentially dangerous outbreak of understatement, Aldo has a son, Paolo, who fancies himself a fashion genius and who is played by Jared Leto. You’ve heard of ham? Leto goes full mortadella, bulked up and stuffed into a pink corduroy suit, billowing tobacco smoke and throwing himself into paroxysms of agita. His most memorable line is “Boof-ah!”

There is potential here for camp, for glamour, for something louche and nasty and over-the-top. Did I mention that Salma Hayek plays a fortuneteller who becomes Patrizia’s sidekick and adviser? But all the emoting is crammed into a curiously literal, procedural frame, as if someone had tried to make an opera libretto out of court transcripts.

Patrizia urges Maurizio to cultivate alliances with his uncle and cousin, and then schemes to push them out, but rather than being interestingly contradictory her motives just seem incoherent. As Maurizio’s marital ardor begins to cool and he forsakes her for a glacial blonde (Camille Cottin), Patrizia’s focus shifts from commerce to revenge.

By then, “House of Gucci” has lost the thread of its own story and collapsed into contempt for its characters, who are terrible businesspeople on top of everything else. A postscript appears onscreen to inform us that Gucci, no longer a dynastic family concern, is now a lucrative global luxury brand, a bit of non-news that arrives as a muted happy ending. It turns out that this isn’t really tragedy or farce, grand opera or opera buffa: it’s corporate promotion.