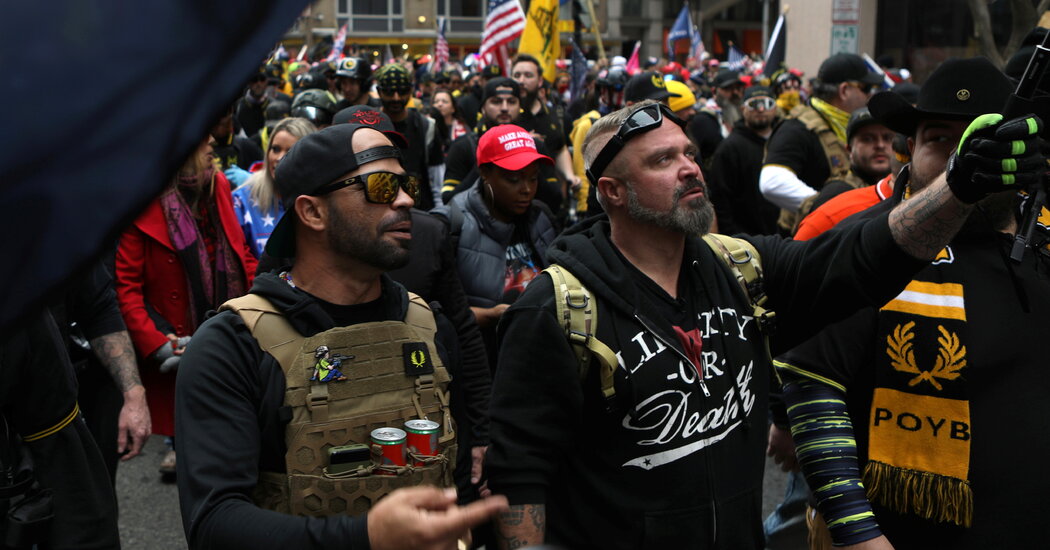 WASHINGTON — The House committee investigating the Capitol attack issued subpoenas on Tuesday to three militia or paramilitary groups, including the Proud Boys and the Oath Keepers, that investigators believe have information about the deadly siege on Jan. 6.

The subpoenas were issued to the Proud Boys International, L.L.C., and its chairman, Henry “Enrique” Tarrio; the Oath Keepers and its president, Elmer Stewart Rhodes; and the 1st Amendment Praetorian and its chairman, Robert Patrick Lewis. They came a day after the panel subpoenaed the political operative Roger J. Stone Jr., the conspiracy theorist Alex Jones and three others.

“The select committee is seeking information from individuals and organizations reportedly involved with planning the attack, with the violent mob that stormed the Capitol on Jan. 6 or with efforts to overturn the results of the election,” Representative Bennie Thompson, Democrat of Mississippi and the chairman of the committee, said in a statement. “We believe the individuals and organizations we subpoenaed today have relevant information about how violence erupted at the Capitol and the preparation leading up to this violent attack.”

The panel said members of Proud Boys International called for violence before Jan. 6, and the Justice Department indicted at least 34 people affiliated with the group.

People associated with the Oath Keepers were similarly involved in planning and participating in the Capitol riot, the committee said, including 18 members who were indicted by a federal grand jury for allegedly planning a coordinated attack to storm the building. Mr. Rhodes repeatedly suggested that the Oath Keepers should engage in violence to ensure their preferred election outcome. He was also allegedly in contact with several of the indicted Oath Keepers members before, during and after the attack on Jan. 6, including meeting some of them outside the Capitol.

Mr. Rhodes has a long history of using violent language, including calling for the hanging of John McCain, the former Republican senator from Arizona.

On Oct. 27, Mr. Rhodes appeared on Mr. Jones’s show claiming that Democrats were stealing the election and that the Oath Keepers would protect President Donald J. Trump’s supporters at the polls. On Nov. 10, Mr. Rhodes said he had “good men on the ground” in Washington prepared to “go in” if Mr. Trump needed them. On Dec. 12, he called on Mr. Trump to invoke the Insurrection Act and warned that the Oath Keepers would mount a “much more bloody war” if he did not, the committee said.

The 1st Amendment Praetorian, a shadowy organization that appears to be largely made up of former intelligence officers and special forces operators, served as bodyguards to Michael T. Flynn, Mr. Trump’s former national security adviser, at rallies in Washington between the election and Jan. 6. In publicly posted videos, Mr. Lewis, the leader of the group, has also acknowledged being involved in the effort to help the lawyer Sidney Powell file lawsuits challenging the integrity of the presidential vote count.

The group provided security at multiple rallies leading up to Jan. 6 that amplified former Mr. Trump’s false claims of a stolen election. The group’s Twitter account suggested on Jan. 4 that violence was imminent, the committee said.

“There may be some young National Guard Captains facing some very, very tough choices in the next 48 hours,” the group wrote.

1st Amendment Praetorian provided security for at least two men who have also been issued subpoenas by the House committee: Mr. Flynn, and Ali Alexander, a promoter of the “Stop the Steal” campaign to undermine the election.

“Today is the day that true battles begin,” Mr. Lewis wrote on Twitter on Jan. 6.

Mr. Lewis, a former Green Beret, was on a list of speakers for a demonstration held in Washington on Jan. 5 hosted by Cindy Chafian, the founder of a group called The 80 Percent Coalition. She also received a subpoena from the House committee in September.

Mr. Lewis, who said he was in contact with Mr. Rhodes, also claimed to be involved with “war-gaming” to continue efforts to overturn the election results even after the mob violence, the committee said.

Mr. Rhodes said by text message on Tuesday afternoon that he was traveling and would soon issue a written statement. A lawyer who has previously represented Mr. Tarrio could not be reached for comment. Mr. Lewis did not respond to a request for comment.

The panel has issued 45 subpoenas and interviewed more than 200 witnesses as it investigates the violence that engulfed Congress and delayed the formalization of President Biden’s victory. The latest subpoenas demand records and testimony by mid-December.

They reflect the broad scope of the committee’s inquiry, which is investigating not only the role of the White House and Mr. Trump’s allies in the Capitol attack, but the militia groups and rioters associated with them.

At the same time, the panel is struggling to compel some of those allies to comply with its investigation. Federal prosecutors have indicted Stephen K. Bannon, a former top aide to Mr. Trump, on contempt charges for refusing to cooperate. Members of the committee have also said that they are considering recommending contempt charges for two other potential witnesses: Mark Meadows, Mr. Trump’s former chief of staff, and Jeffrey Clark, a former Justice Department lawyer involved in Mr. Trump’s plans to overturn the election.

The former president is also fighting in federal court against the committee’s request for hundreds of White House documents about his actions before and during the Capitol riot.

While no one from the 1st Amendment Praetorian is currently facing criminal charges in connection with the attack, prosecutors focused on the Proud Boys and the Oath Keepers soon after Jan. 6.

Several members of the Proud Boys — far-right nationalists who style themselves as “Western chauvinists” — have been charged with taking part in the assault. Among them are presidents of the group’s chapters in Seattle, Philadelphia, Hawaii and North Carolina.

Mr. Tarrio has not been charged in the Capitol attack; he was ordered to leave Washington after being arrested on Jan. 4 in a separate case for burning a Black Lives Matter banner at a Black church after a pro-Trump rally in December. He is currently serving 155 days in jail in connection with those charges.

Though he was not in Washington on Jan. 6, Mr. Tarrio was in direct contact with some of his lieutenants on the ground that day and on the evening before the riot, according to private chats obtained by federal investigators. Prosecutors also say that Mr. Tarrio ordered his men to avoid their usual black-and-yellow polo shirts on Jan. 6 and instead go “incognito.”

The Oath Keepers, a decade-old antigovernment militia group, has also been a chief focus of the Justice Department’s inquiry. Dozens of members have been charged, including several in what amounts to the largest conspiracy case that prosecutors have brought to date. In May, the leader of the group, Mr. Rhodes, gave an interview to the F.B.I. against the advice of his lawyer and told agents that none of his members had intended to disrupt Congress’s certification of the Electoral College vote on Jan. 6 — the chief accusation against his followers.