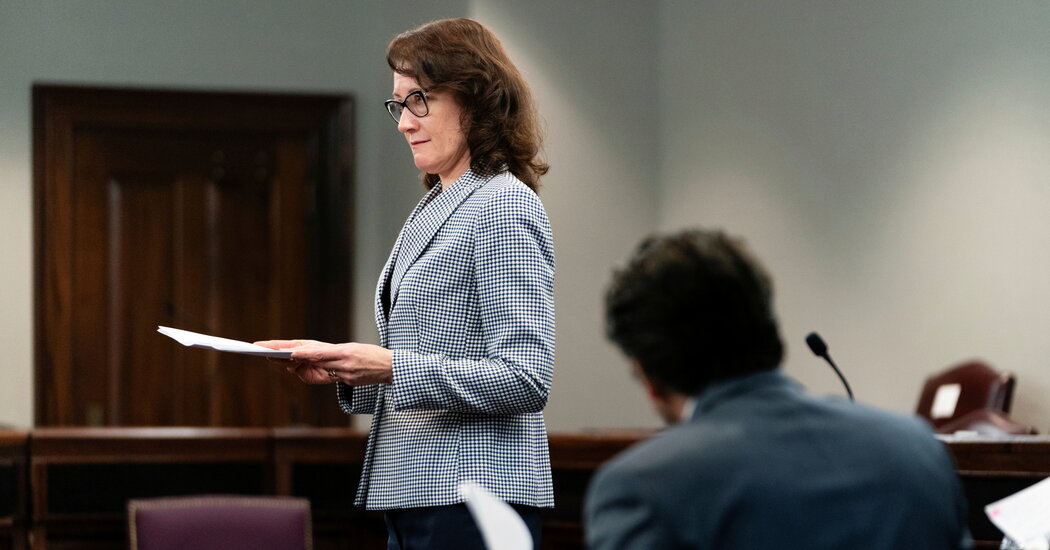 BRUNSWICK, Ga. — The lawyer was from out of town, a prosecutor who had spent the bulk of her career in a large, liberal city, and she had been brought in to try the biggest case of her career: the murder of a Black man on a sunny afternoon by three white men just outside a small city pinned to the South Georgia coastline.

Despite the evidence of racism she had at her disposal, Linda Dunikoski, the prosecutor, stunned some legal observers by largely avoiding race during the trial, choosing instead to hew closely to the details of how the three men had chased the Black man, Ahmaud Arbery, through their neighborhood.

The risks went beyond her career and a single trial. Failure to convict in a case that many saw as an obvious act of racial violence would reverberate well outside Glynn County, Ga. For some, it would be a referendum on a country that appeared to have made tentative steps last summer toward confronting racism, only to devolve into deeper divisions.

On Wednesday, Ms. Dunikoski’s strategy was vindicated when the jury found the three men guilty of murder and other charges after deliberating for roughly a day. The convicted men — Gregory McMichael, 65; his son Travis McMichael, 35; and their neighbor William Bryan, 52 — are now facing life sentences in prison. They are also facing trial in February on separate federal hate-crime charges.

Kevin Gough, the lawyer who represented Mr. Bryan, credited Ms. Dunikoski with threading the most difficult of needles. She mentioned a racial motive just once during the three-week trial, in her closing argument: The men, she said, had attacked Mr. Arbery “because he was a Black man running down the street.”

“She found a clever way of bringing the issue up that wouldn’t be offensive to the right-leaning members of the jury,” he said. “I think you can see from the verdict that Dunikoski made the right call.”

A number of legal experts, in the moment, thought Ms. Dunikoski’s strategy to be a risky one. But many in Brunswick thought that she had proved savvy about what tone to strike in a Deep South community where, they said, race doesn’t have to be referenced explicitly for everyone to understand the implications.

Cedric King, a Black local businessman, said that the evidence against the defendants, particularly the video of Mr. Arbery’s murder, had been strong enough to stand on its own.

“Anybody with warm blood running through their veins that witnessed the video and knew the context around what transpired knew that it was wrong,” Mr. King said.

The case, from the beginning, echoed painful themes in the Deep South. The murder of a Black man by white men carrying guns, presented to a jury that included just one Black person. The rest were white. The jury had been put in place over the protests of Ms. Dunikoski, who had tried unsuccessfully to prevent potential Black jurors from being removed during the selection process by the defense lawyers. It was also a painful moment for Glynn County, a majority-white county that remains marked by the legacy of segregation.

Its county seat, Brunswick, had earned accolades, decades ago, for the way its Black and white leaders worked together to integrate schools and public facilities. But the selection of such a racially lopsided jury had sparked anger and mistrust in a county where more than one in four residents is Black. Neighboring Brunswick are four barrier islands known as the Golden Isles, a popular tourism destination that is also home to some of the wealthiest people in the country.

Before the trial Ms. Dunikoski, who is 54 and declined to be interviewed, had spent her career largely in the Atlanta metropolitan area, establishing a reputation as a tough-minded prosecutor going after murderers, gang members and sex offenders. By the end of the trial, she had won the trust of the Arbery family so deeply that they came to call her Auntie Linda.

The case took a tortuous route before landing in Ms. Dunikowski’s lap. Two local district attorney’s offices handled the case to begin with, but both eventually removed themselves from it, citing conflicts of interest; one of the former prosecutors, Jackie Johnson, has been criminally indicted over her handling of the case. It was in the hands of a third D.A.’s office before being passed to the more resource-rich Cobb County, where Ms. Dunikoski has worked since 2019.

Before joining the Cobb County office, Ms. Dunikoski had spent more than 17 years as a prosecutor in Fulton County, where one of her highest-profile cases was the trial of a group of Atlanta Public Schools teachers who were found guilty in 2015 of racketeering and other charges for altering students’ standardized test scores. Critics said the prosecutors had offered up a group of mostly Black educators as scapegoats for a school district that had much deeper systemic problems.

In 2009, according to The Associated Press, Ms. Dunikoski was jailed by a judge for failing to pay a $100 fine after the judge had cited her for contempt. The chief county prosecutor at the time reportedly engaged in a shouting match with the judge, arguing that he had unjustly harmed the reputation of an honest lawyer.

Understand the Killing of Ahmaud Arbery

The shooting. On Feb. 23, 2020, Ahmaud Arbery, a 25-year-old Black man, was shot and killed after being chased by three white men while jogging near his home on the outskirts of Brunswick, Ga. The slaying of Mr. Arbery was captured in a graphic video that was widely viewed by the public.

The victim. Mr. Arbery was a former high school football standout and an avid jogger. At the time of his death, he was living with his mother outside the small coastal city in Southern Georgia.

The verdict. On Nov. 24, a jury found the three defendants guilty of murder and other charges. The men, who face sentences of up to life in prison, have also been indicted on separate federal charges and are expected to stand trial for those in February.

Observers said Ms. Dunikoski had succeeded in the trial over Mr. Arbery’s murder by finessing a difficult case with the right tone.

She presented her case to the jury with a style that was at times matter-of-fact and at times intimate and colloquial, like a strict high school principal who occasionally offers students a flash of her unguarded self. At some moments, she twisted her body into exaggerated, matador-like poses as she described the way she believed Mr. Arbery, in the moment he was shot, had tried to defend himself.

She led the jury through a thicket of detailed legal points as she pushed back against the defense’s argument that the three white men had pursued Mr. Arbery legally, under a state citizen’s arrest law that has since been largely gutted. And she sought to dismantle the idea that the man who pulled the trigger, Travis McMichael, had done so in self-defense.

In her rebuttal to the defense’s closing argument — the last word before jurors were sent off to decide the fate of the three men — Ms. Dunikoski made an appeal to common sense, offering up a general rule of life that she said the defendants had violated: “Don’t go looking for trouble.”

She had already told them that Mr. Arbery was killed because he was Black. Now she was telling them that the case wasn’t about whether the men were “good or bad people.” Rather, she said, it was “about holding people accountable and responsible for their actions.”

On Wednesday, as the jury deliberated, Mr. Arbery’s aunt, Theawanza Brooks, fretted over the fact that they did not have a T-shirt for Ms. Dunikoski with Mr. Arbery’s name on it. When Ms. Dunikoski briefly entered a room in the courthouse, where family members had been watching a video feed of the proceedings, another aunt cried out, “Linda, girl, you killed it!”

Soon after the verdict was broadcast outside the Glynn County Courthouse on Wednesday, Ms. Dunikoski was hailed as a hero by the crowd. At the mention of her name, they cheered, “Thank you, Linda!” Charlie Bailey, a Democratic candidate for Georgia attorney general, responded to the verdict by texting, “Amen,” to his friends.

“It wasn’t too long ago in Georgia that three white men could kill a Black man and did not stand a very good chance of being held to account by an all white jury,” said Mr. Bailey, who is white and worked with Ms. Dunikoski in the Fulton County prosecutor’s office. “I’m proud of where I’m from, but part of that is also not ignoring the sins of our forefathers and where that leaves us today.”

Shortly after the verdict, Ms. Dunikoski spoke to a thrilled and relieved crowd outside the courthouse, with Mr. Arbery’s parents at her side. Her tone, once again, was direct. “The verdict today was a verdict based on the facts, based on the evidence,” she said. “And that was our goal — was to bring that to the jury, so they could do the right thing.”