How do you say ‘Omicron’? 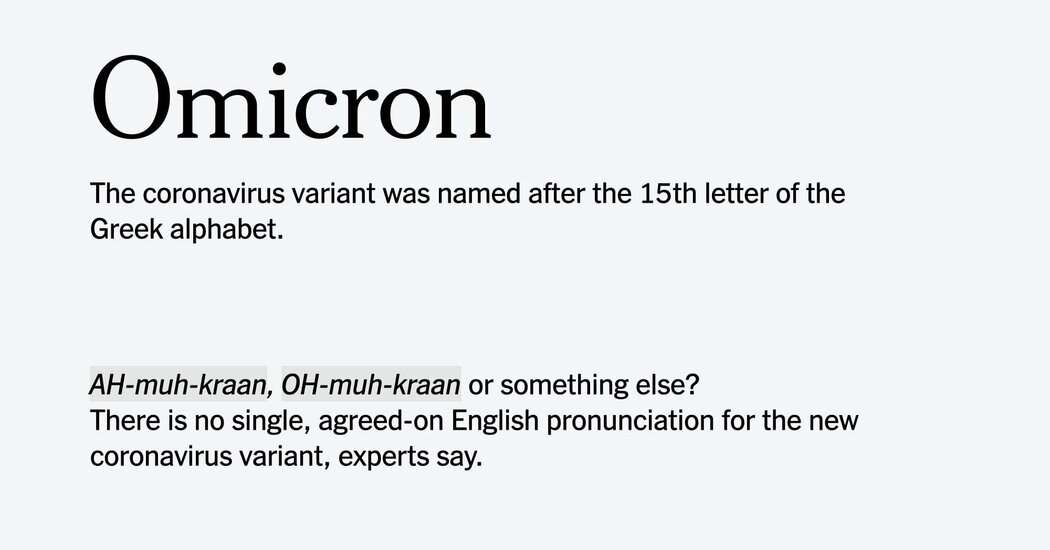 Among the many unknowns surrounding the new coronavirus variant called Omicron, named after the 15th letter of the Greek alphabet, one has stood out to many English speakers: How is it pronounced?

There is no single, agreed-on English pronunciation, experts say.

One pronunciation, according to Merriam Webster, is “OH-muh-kraan,” with a stress on the first syllable.

A World Health Organization official, Dr. Maria Van Kerkhove, recently said it that way when announcing that the variant was of concern.

In the United States, it is often pronounced “AH-muh-kraan,” Merriam Webster says. Less common are “OH-mee-kraan,” as Prime Minister Boris Johnson of Britain pronounced it this week, or “OH-my-kraan.”

On the New York Times podcast “The Daily,” Apoorva Mandavilli, who reports on the coronavirus and its variants, said she was going with “AH-muh-kraan.”

“I don’t think it really matters that much, honestly,” she said.

The New Oxford English Dictionary gives a pronunciation that differs from those in Merriam-Webster, according to Dr. Andreas Willi, a comparative linguistics professor at Oxford University. “Namely rather like an English phrase ‘o-MIKE-Ron,’” he said.

The word is a compound from the Greek “o mikron,” meaning “small o.” In classical Greek, the word was pronounced with the second syllable sounding like an English “me,” Dr. Willi said.

Peter Sokolowski, editor at large at Merriam Webster, said that because the Greek word is transliterated for pronunciation into English, sounding much as the word “omnipotent” is different from its Latin “omni-potent” origin, then the “AH-muh-kraan” pronunciation “makes perfect sense.”

But, he added, “There isn’t a wrong answer.”

The divergences are to do with the name having been adopted as a loanword and used by English speakers in different places at different times, Dr. Willi said.

“When we speak of ‘Paris’ in English, that is also very different from the ‘proper’ French way of pronouncing the same name,” he said. “But it is hardly wrong in a strict sense.”