How Josiah Johnson Became the King of NBA Twitter Jokes 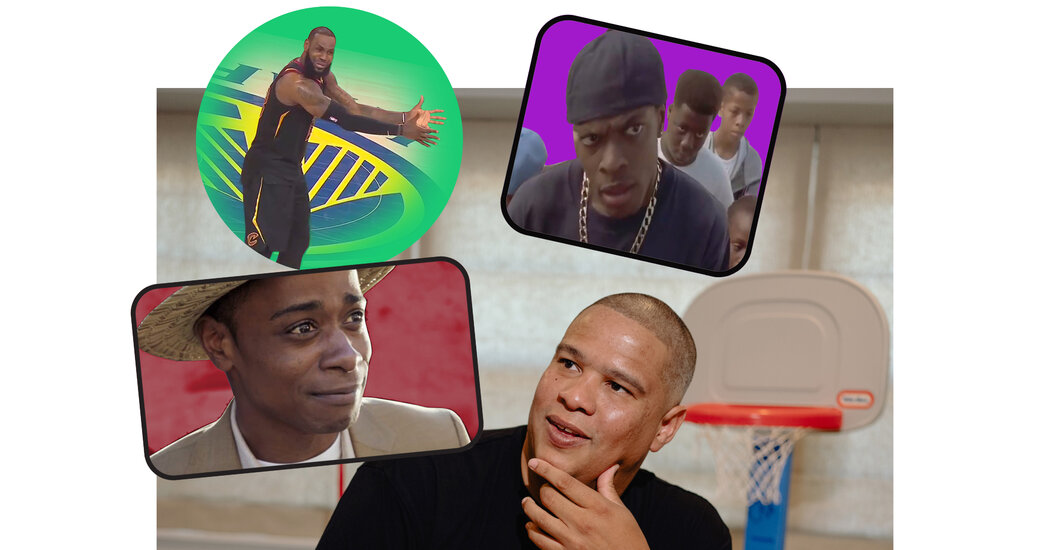 WOODLAND HILLS, Calif. — Josiah Johnson crafts most of his jokes in a comfortable room tucked in the back of his Southern California home. There is no complex setup.

The room’s décor includes an array of sports books, shoe boxes and a light blue University of California, Los Angeles basketball chair from when he played for the team. A plump brown couch takes up much of the space. Above it is a painting of LeBron James in a Los Angeles Lakers jersey by Rod Benson, a former college basketball player. A photo of the deceased rapper Nipsey Hussle hangs over a bed in a corner.

This is Johnson’s makeshift office, where he posts most of the memes, funny images and videos he uses to satirize current events in sports and pop culture. His comedic efforts have made him one of the most popular personalities on Twitter, with the handle KingJosiah54.

Johnson considers himself a modest one-man social media company, where much of the work of watching live sports and posting about them is done with his feet propped up, iPhone in hand, comfy T-shirt and shorts on.

“I just want no frills in how I operate and move,” Johnson, 39, said. “At the end of the day, social is what the name implies — just being social. How would you talk to your friends normally? Would it be a whole elaborate setup? No. It’s just a phone wherever you’re at, and being able to use that technology to be able to communicate with the entire world.”

Anyone involved in #NBATwitter — the community of hoops fans who celebrate, and argue about, basketball daily — has come across one of Johnson’s memes. He pokes fun with references from movies and TV shows, well-known and obscure. He has a keen ability to find humor in even the most serious situations, like the vaccination status of Nets guard Kyrie Irving or the fraught relationship between Ben Simmons and the Philadelphia 76ers.

“I’m getting some satire off in a way that they may laugh, but it’ll make them think as well,” Johnson said.

Johnson, who is Black, knows his jokes aren’t for everyone — and he doesn’t care. He often pulls from elements of Black culture that haven’t been appropriated, and thus may sail over the heads of non-Black sports fans. Many of his memes are nuanced references to shows specific to his own interests, like the drama series “The Wire” or the sports movie “White Men Can’t Jump” (his father, Marques Johnson, is in the movie).

“I’ve just really built a devoted following with people that I’m super appreciative of that get the joke, too,” Josiah Johnson said. “I’m almost 40 years old, so I do a lot of stuff from my lane. And that could be problematic for kids who are looking at me as an old geezer. They don’t get a lot of the references, so they don’t understand why people are laughing at them.”

He was a forward at U.C.L.A. in the early 2000s on teams that included future N.B.A. players like Matt Barnes, Jason Kapono and Trevor Ariza.

Johnson always had a unique sense of humor and a big, energetic personality, though he could be reserved and almost seem shy at times, said Steve Lavin, who coached Johnson at U.C.L.A. and is now a college basketball analyst. Lavin added that Johnson brought an authentic lightheartedness to a high-pressured environment where winning was expected.

“He doesn’t have to say anything,” Lavin said. “It could be the expression on his face or knowing what he’s thinking. You could tell the mind was always at work.”

Johnson’s father also played for U.C.L.A., under John Wooden in the 1970s, and spent over a decade in the N.B.A., mostly with the Bucks and Clippers. The Johnsons were close with the family of Marques Johnson’s Clippers teammate, Norm Nixon, and Nixon’s wife, the producer and choreographer Debbie Allen. So Johnson spent many afternoons on the set of the sitcom “A Different World,” which Allen produced. Johnson’s mother, Jocelyn, was an extra.

Those experiences nurtured Johnson’s love for entertainment. He cocreated the Comedy Central animated sitcom “Legends of Chamberlain Heights,” which lasted two seasons. During the show, Johnson studied how programs like “South Park,” “Game of Thrones” and “Insecure” used social media to build fan loyalty and followed that formula to amass nearly 100,000 followers on the “Chamberlain Heights” social media page. That was the impetus for generating his own following of over 200,000 accounts across Twitter and Instagram.

His content has caught the attention of everyone from athletes to filmmakers. LeBron James, whom Johnson has followed closely since learning that James sat in his U.C.L.A. chair during a 2003 high school tournament, may be one of Johnson’s biggest fans. He often retweets Johnson’s jokes and has referred to him using the goat emoji, a symbol of greatness. Johnson has one of James’s tweets to him printed out and placed on a shelf.

In 2019, Johnson posted a meme representing the N.F.L. players Antonio Brown and Josh Gordon as two characters from the thriller “Get Out.” Jordan Peele, the film’s creator, saw the tweet and replied to it.

“You win, Josiah,” Peele wrote in a tweet that Johnson has printed on a T-shirt hanging in his closet.

“That really launched this thing to where it is,” Johnson said. Peele followed him on Twitter and the two communicated via direct messages. “I just thanked him so much for giving people like myself the opportunity to be successful,” Johnson said, adding later: “If I went to my agents and was like, ‘Get me a meeting with Jordan Peele,’ they’d laugh in my face. But if I put up a tweet that can get Jordan Peele’s attention. I can have him come to me. So that’s the thing that for social, that really kind of opened my eyes.”

Johnson’s social media content has yielded numerous outside opportunities, including a podcast called “Outta Pocket” that he co-hosts on Wave.tv. He also has a writing role on the Netflix series “Colin in Black and White,” based on the life of the former N.F.L. quarterback Colin Kaepernick and produced by Kaepernick and the filmmaker Ava DuVernay.

Johnson’s ascension coincides with a rise of content creators who post on social media and make money off nearly every aspect of their lives. He said he sees situations “in meme form.” When something happens in sports or pop culture, Johnson knows where to look in his photo album with of a couple thousand clips and images.

He has become known as much for his speed as his wit.

“Josiah Johnson is one of those folks that legitimately stopped the timeline,” said TJ Adeshola, who leads the United States sports division at Twitter. “When Josiah has a tweet, it’s always timely. It’s always hilarious. It’s always at the perfect moment.”

Twitter has paired Johnson with brands and pays him to make appearances on Twitter’s N.B.A. show called “NBA Twitter Live,” which the social media company hosts with Turner Sports.

The N.B.A., with its bold personalities and resulting drama, is distinct among professional sports leagues in the way it has cultivated a fan culture that routinely births instant-classic comedic moments that are widely shared across social media.

“There’s always going to be something funny to pick up on,” said Tyler Puryear, a close friend of Johnson’s and another popular social media personality. He is better known by his Twitter handle, DragonflyJonez, an homage to a character on the ’90s sitcom “Martin.”

Like Johnson, Puryear gained notoriety by making fun of almost anything, or anyone, in the N.B.A. news cycle. That comedic element, Puryear said, puts the sport’s competitiveness in perspective.

“You can’t ever lose sight of the fact that it’s just a game. It’s just a sport,” he said. “It’s a bunch of dudes in tank tops and shorts throwing a leather pouch at an aluminum ring.”

That view has made room for Johnson’s success.

“That’s where he’s masterful at this whole Twitter thing, is that he can reach a common ground and pull us in, and have us laugh there,” Puryear said. “And I think that’s the best possible way to use Twitter.”