How Lila Moss Hack Brought Diabetes to the Runway 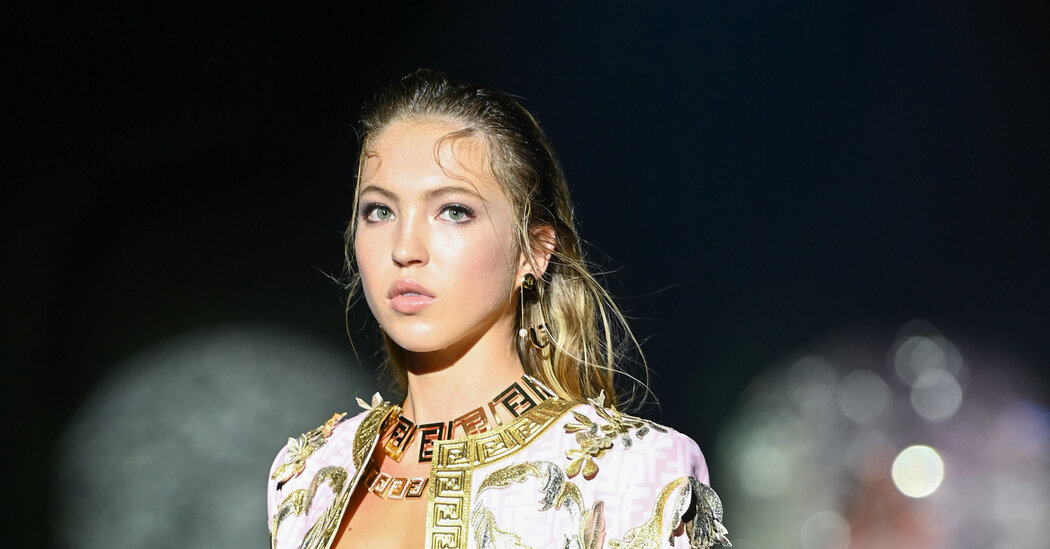 The Fendace show, held at the tail end of Milan Fashion Week in September, made news for a number of reasons: The Fendi designers, Kim Jones and Silvia Fendi, had created their version of Versace, and Donatella Versace had done her Fendi; it was the first time two brands from different luxury groups had been let loose in the other’s archives; and the runway was flush with former supermodels, including Kristin McMenamy, Naomi Campbell, Amber Valletta, Kate Moss and Gigi Hadid.

Yet perhaps the most notable aspect of the show may have been one of the smallest: a tubeless white pump visible on the upper left leg of Lila Grace Moss Hack, a 19-year-old model who was strutting the runway in a gold-and-white Fendi x Versace swimsuit, cut high on the thigh, and a Greek-key-trimmed jacket.

An omnipod glucose pump used to treat Type 1 diabetes (T1D), an autoimmune disease that can be diagnosed at any age — my daughter was diagnosed when she was 8 — it was impossible to miss. Its appearance on the runway, spotlighting an often invisible condition, was another step in fashion’s definition of inclusivity.

While the last full fashion season, earlier this fall, may have been the most inclusive across race, age, size and gender, according to The Fashion Spot, a trend forecasting site, models with disabilities remain underrepresented and underexposed.

Laura Winson is the director of Zebedee Management, a modeling agency founded in 2017 to represent disabled and visually different models. “Before Zebedee, disability was not included in the diversity debate,” she said. “Only 0.02 percent of people featured in fashion advertising had a disability.”

The image of Ms. Moss Hack with her pump at Fendace quickly circulated among the T1D community — according to JDRF, an organization that funds T1D research, there are about 1.6 million Americans who have it — and set off a flurry of supportive messages. Melany Grey posted in Ms. Moss Hack’s Instagram feed, “the whole T1D community salutes you!” Angie Martin wrote, “I love showing my 11yo T1D daughter your pic.” And Eliska Pole simply posted, “Thank you for wearing your Insulin pump so proudly.”

Though Ms. Moss Hack declined to comment on her decision to go public with her pump, she was the only model in the Fendace show wearing a revealing swimsuit, and given the scrutiny of any model on a runway, it is difficult to believe the choice was an accident.

That’s specially so when a trawl through more than 30 magazine covers, features and runway snaps featuring Ms. Moss Hack as well as two other models, Stephanie Bambi Northwood-Blyth and Grace Clover, who also have T1D and wear glucose pumps, did not reveal any pumps or other glucose monitoring devices. Whether they were taken off, hidden or airbrushed out was unclear, but it is also undeniable that they had been erased.

Ms. Northwood-Blyth, a 30-year-old Australian-born model, has walked the runway for Balenciaga and Chanel and was the face of Calvin Klein CK One fragrance. A T1D advocate who has been modeling since she was 14 and received her T1D diagnosis at 12, she said that while she has found support in the industry, she has sometimes chosen to remove her glucose monitor on the job.

“It was always my choice because there are days I want to talk about diabetes, but there are days where I’d take it off or when I don’t have that one-line explanation ready to go,” Ms. Northwood-Blyth said.

Ms. Clover, 19, was diagnosed with T1D at 14, two years before starting to model and has walked the runway for Dior, JW Anderson, Prada, Ferragamo and Fendi, was unsure if she was ever asked to remove her pump on set.

“I have the feeling I have been on one occasion, but it was because I asked if it was going to be a problem, as it would be visible in the look,” she said, adding: “I completely understand that. It can be Photoshopped out later.”

Like the pump worn by Ms. Moss Hack, constant glucose monitors (C.G.M.s) or blood glucose monitors (B.G.M.s) help to reduce the need for finger pricks or insulin injections and provide better blood sugar regulation, particularly for those with T1D.

As visual indicators of T1D, these devices open communication lines and improve people’s understanding of T1D.

“Seeing Lila wear her pump reminded me that I had fallen back on the practical necessity of communicating to people, instead of sharing my experience more openly,” said Ms. Clover, who now wears her C.G.M. for all of her modeling jobs.

“I hope that others out there can look toward Grace as a role model and feel reassured that they too can achieve whatever they set their minds to,” said Levi Asher, the associate director of development at IMG Models.

For the Irish author and disability activist Sinead Burke, who has achondroplasia, a genetic disorder that is the most common form of dwarfism, seeing models with disabilities on the runway is important because, she said, “fashion touches everyone because we all need to wear clothes. It is almost universal.”

That Ms. Moss Hack may not have realized that wearing her visible glucose pump on the runway “would be a big deal,” Ms. Burke said, “is, in and of itself, success.”