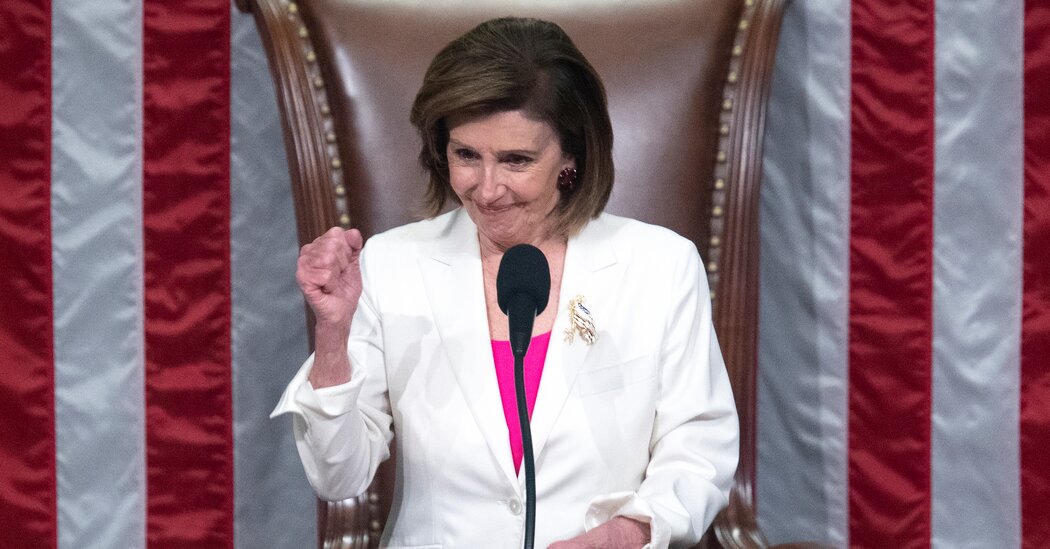 “We must pass it, and then we have to see it for me to have an almost religious experience of appreciating what it is,” Ms. Pelosi said in her Capitol office, not long after the vote to approve the bill, which was delayed until Friday morning by an angry eight-hour stemwinder from Representative Kevin McCarthy of California, the Republican leader. “But it’s a big deal.”

While her main responsibility was wrangling the House, Ms. Pelosi devoted considerable time to Mr. Manchin and Ms. Sinema, both of whom hold the power to scuttle the deal in the evenly divided Senate if they balk.

Ms. Pelosi has ties to both. She has bonded with Mr. Manchin, who like Ms. Pelosi grew up in a political family, over their shared Italian heritage and Catholicism and her work on health and pension benefits for coal miners, represented in her office by a statue of a miner gifted to her by Mr. Manchin.

When Ms. Pelosi wanted to send a message to Mr. Manchin about voting rights this year, she had it delivered on a literal silver platter given to her by Robert C. Byrd, the former Senate leader from West Virginia whom Mr. Manchin often cites as a guiding star. The tray, which is warmly inscribed in appreciation for Ms. Pelosi’s fund-raising work on delivering a Democratic Senate majority in 1987, was a reminder for Mr. Manchin of the speaker’s past relationship with his predecessor.

“I thought he should see it,” Ms. Pelosi said with a chuckle.

Ms. Pelosi knew Ms. Sinema as an activist in Arizona even before she was elected to the House, where they developed a mutual respect and rapport. It was warning signs from Ms. Sinema in late September that led Ms. Pelosi to begin the delicate task of separating the social policy bill from a bipartisan infrastructure measure that had already passed the Senate with Ms. Sinema as a main author.

Progressives were adamant that they would only back the public works bill after they were assured that Senate Democrats, notably Mr. Manchin and Ms. Sinema, were committed to voting for the social policy bill — an assurance that did not, and still does not, exist.

With the deadline for a vote approaching, Ms. Pelosi opened a back channel to Ms. Sinema through former Representative Joe Kennedy III, a friend of Ms. Sinema’s who entered the House with her in 2013.