How the Cream Cheese Shortage Is Affecting NYC Bagel Shops 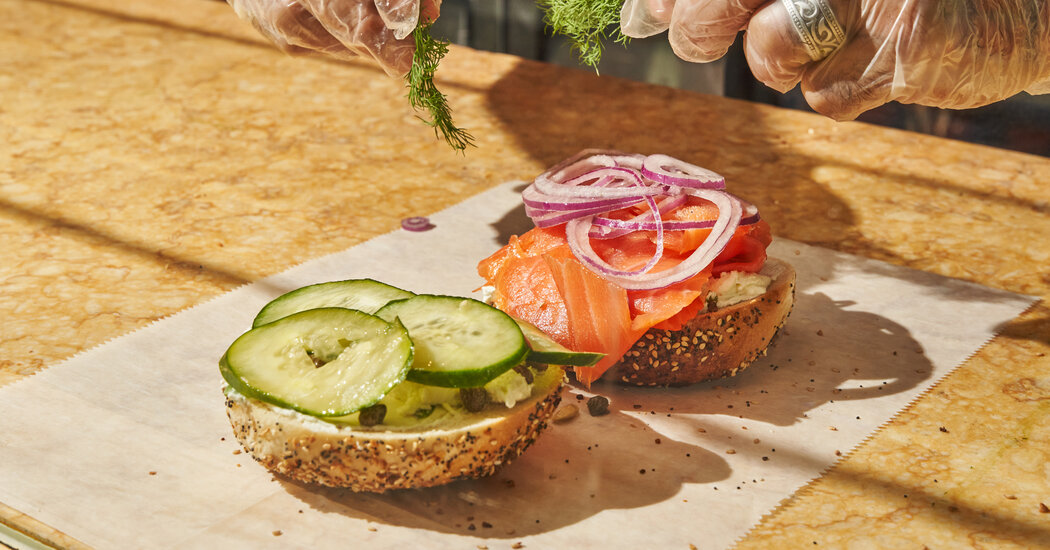 Zabar’s is running low. Tompkins Square Bagels is down to sticks. Pick-a-Bagel has only a few days’ supply left.

All over New York City, bagel makers say, a schmear shortage is threatening one of the most treasured local delicacies: a fresh bagel with cream cheese.

“This is bad. This is very bad,” said Pedro Aguilar, a manager at the Pick-a-Bagel chain, which has several Manhattan locations. On Friday afternoon, Mr. Aguilar said he had only enough cream cheese to last until Monday.

Nick Patta, who has worked at Absolute Bagels on the Upper West Side for 11 years, said his usual supplier in Queens had run out of the shop’s go-to cream cheese brand for the first time that he could remember.

“We went this week and the shelves were empty,” he said.

Supply chain issues have plagued the United States for months, causing scarcities of everything from cars to running shoes. In Alaska, residents are struggling to acquire winter coats.

Now, New York’s bagel purveyors are starting to feel the effects in a sudden and surprising development that has left them scrambling to find and hoard as much cream cheese as they can.

Scott Goldshine, the general manager at Zabar’s, estimated on Friday that he had enough to last 10 days.

“Begging is one of my plans, which I have done, and it’s helped,” Mr. Goldshine said, adding that he had called about eight distributors in recent days. “If anybody’s got it, let them call me.”

New York bagel sellers go through thousands of pounds of cream cheese every few weeks. The recipe for the beloved spread, which according to the Kraft Heinz Company originated in New York sometime in the 1870s, is fairly simple: lactic acid, pasteurized milk and cream. Many shops start their mixes with Philadelphia cream cheese, a Kraft Heinz brand, which arrives on huge pallets.

The pallets are not filled with the Philadelphia cream cheese found on most grocery store shelves: The raw product that comes to bagel shops is unprocessed and unwhipped, said bagel makers, who use it as a base for their own creations. Without that base, they said, the spreads just won’t taste or feel the same, and customers will notice.

But for about three weeks now, dairy suppliers said, the cream cheese orders they have placed with manufacturers have come up short.

“I’ve never been out of cream cheese for 30 years,” said Joseph Yemma, the owner of F&H Dairies in Brooklyn, a dairy product distributor for many of the city’s bagel shops. “There’s no end in sight.”

In interviews with owners and workers at about 20 bagel shops and delis across the city, many said they were frazzled, frustrated and rushing to find cream cheese after learning about the shortage in the past few days.

Absolute Bagels has enough cream cheese to last until Thursday, Mr. Patta said. But employees at his typical supplier told him they could not confirm when the next shipment would come in. Although he planned to check with other suppliers in the Bronx and Queens, he was still alarmed by what he was hearing.

“If we cannot find cream cheese, I worry now, what are we going to do?” Mr. Patta said.

Several customers at Absolute Bagels on Friday said that if cream cheese were not available, they would be less likely to order a bagel at all.

“Probably not, no,” said one, James Giaquinto. His reasoning: “That’s an essential part of the bagel.”

The first cracks in the supply chain started showing several months ago, some shop owners said, when they started to run low on items like deli wrappers, Gatorade and coffee cup lids.

“It’s been very weird things, and always the same story,” Christopher Pugliese, the owner of Tompkins Square Bagels in the East Village, said. “All of us behind the scenes, when you go into the shops, we’re all struggling to patch things together.”

Mr. Pugliese said he had gotten a call from his dairy supplier Thursday night telling him that the 800-pound order he was expecting on Friday would not be arriving.

“I was like, ‘What am I going to do this weekend?’” Mr. Pugliese said. “Four people just told me they can’t get me cream cheese.”

After calling four other distributors, he said, he finally got his hands on a case — except that instead of the usual giant bag of cream cheese, the box was full of individually wrapped three-pound sticks.

Some bagel shop owners are taking their cream cheese scavenging across state lines. On Friday afternoon, Frank Mattera, an owner of Bagelsmith in Brooklyn’s Williamsburg neighborhood, said he planned to drive to New Jersey to pick up 2,000 pounds of cream cheese himself.

Mr. Mattera said he had been forced to go that route in recent weeks to meet the demand for the thousands of bagels his shop sells each day without raising prices.

“I’ll jump in my truck and I’ll drive to northern Jersey and pick it up, but I usually wouldn’t have to go that far,” he said. “You make a phone call and it’s dropped off to you.”

And because the cream cheese that bagel stores use is in its rawest form, shop owners cannot simply supplement their stashes by running to the grocery store for a few tubs.

“We also don’t want to keep opening up 500 little packets of cream cheese to get what we need,” said Adrian Concha, the general manager at Shelsky’s Brooklyn Bagels in Park Slope.

Phil Pizzano, a sales representative at Fischer Foods, one of the largest food distributors in New York State, said he had gotten hundreds of calls from panicked bagel shop owners over the past few weeks asking whether there was any cream cheese left for them to sell.

He has struggled to understand why the Philadelphia cream cheese coffers have suddenly run dry.

“You get answers across the board from every manufacturer,” he said.

Jenna Thornton, a Kraft Heinz spokeswoman, said in a statement that the company was seeing a spike in demand for several of its products. To accommodate the increases, she said, the company had been shipping out 35 percent more product than last year to food service partners, including bagel shops.

“We continue to see elevated and sustained demand across a number of categories where we compete,” Ms. Thornton said in the statement. “As more people continue to eat breakfast at home and use cream cheese as an ingredient in easy desserts, we expect to see this trend continue.”

Problems have popped up at every point along the supply chain that brings cream cheese from factories to the morning bagel, Mr. Pizzano said, including a labor shortage in the manufacturing sector that began at the height of the coronavirus pandemic, a lack of truck drivers because of resistance to vaccine mandates and a scarcity of packaging supplies.

The cream cheese shortage, he said, was also posing a challenge to bakeries, many of which expect to churn out hundreds of cheesecakes and other cream cheese-based desserts for the holidays.

“Everyone right now on the market is scrambling to purchase whatever Kraft products they can,” he added. “It’s not just cream cheese.”

Although the shortage appears to be the biggest crisis facing bagel shops at the moment, several also reported new problems finding meat, an essential ingredient in many breakfast sandwiches.

Kayla Ramon, a supervisor at Bo’s Bagels in Harlem, said the shop had recently been able to stock up on cream cheese but was having trouble getting Taylor Ham.

“Last week, we started feeling the shortage,” Ms. Ramon said. “Now, little by little, it’s taking its toll on us.”

Barney Greengrass, the popular appetizing shop on the Upper West Side, has been struggling to find enough pastrami and beef tongue.

Gary Greengrass, the owner, said he had heard from bagel shop owners as far away as the Carolinas who have been unable to get cream cheese. The supply chain issues should be a wake-up call for Americans who take the complicated process for granted, he said.

“We don’t appreciate what goes behind everything to move things from the source to the store and throughout the country,” Mr. Greengrass said.

It remains to be seen whether the shortage will translate into higher prices or limits on orders, several shop owners said. But distributors said they did not anticipate the problem resolving itself anytime soon.

Mr. Pugliese of Tompkins Square Bagels said he had pondered eliminating less popular cream cheese flavors like espresso for a few weeks. Others said they had turned to lower-quality suppliers.

“It sounds kind of silly, talking about this like it’s some kind of huge crisis,” Mr. Pugliese said.

But, he noted, a bagel with cream cheese is a New York institution and a “big deal” to many of his customers.